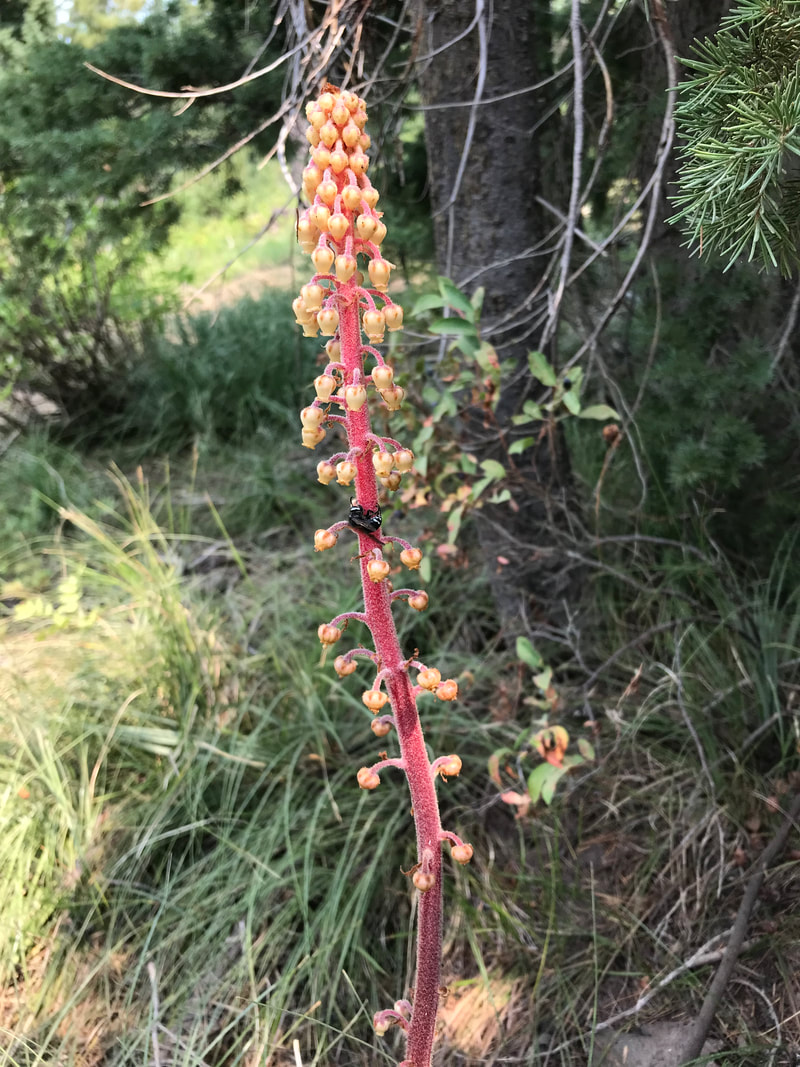 GENESIS NAME:  Pterospora andromedea Nutt.
DISTRIBUTION: Mostly all the western half of the nation and the Great Lakes & New England
SEASON: June, July & August
MEDICAL USE: Not usually eaten
POISONOUS:
EDIBILITY:  They can be roasted or baked under the fire 'like mushrooms'.May 4, 2013
FEATURES:  Surprisingly, pinedrops are in the same family as blueberries. The only physical resemblance I can see is their urn-shaped flowers, which prevent short-tongued insects from accessing its nectar. ... Spotted Coralroot (Corallorhiza maculata) is an orchid that grows in the same habitat as pinedrops and is also parasitic.
LEAVES:  None, only tiny scales growing against the stalk
​FRUITS:  Capsule 5-celled, depressed-globose, 8-12 mm. broad.

I found this Pinedrop on the Moon Pass Road in August, 2021
Woodland pinedrops is a tall, reddish-purple plant with a sticky, unbranched stem. It has small, white to pink, urn-shaped flowers which hang upside-down. The leaves are small and scale-like, mostly on the lower stem, also purplish. Following flowering in mid to late summer, the stems become quite woody and stiff, making an interesting dried flower.
Pinedrops is a member of the Indian-pipe family (Monotropaceae). Pinedrops is a root parasite, depending on its association with a mycorrhizal fungus that is also associated with a pine tree. Pinedrops produces very little chlorophyll and is therefore not green in color and does not conduct photosynthesis.
Pinedrops is primarily a western species, with disjunctive locations in the Black Hills and Great Lakes area, and scattered sites in Quebec and New England. It typically occurs in small populations and individual pinedrops plants may not appear above ground every year. It usually occurs in conifer forest or mixed conifer-hardwood forest.
Pinedrops is listed as threatened in Michigan, and endangered in New York, Vermont, and Wisconsin. Reasons for its rarity include typically small population sizes; short-lived seeds; variable occurrence and dormancy at a given site; and association with specific fungal and conifer partners. Pinedrops seeds are difficult to germinate and establish, and plants do not transplant well. This woodland oddity is best enjoyed where one finds it.
A monotypic genus, Pterospora is achlorophyllous and mycoheterotrophic; that is, it utilizes ectomycorrhizal fungi of the genus, Rhizopogon to obtain carbon from the roots of coniferous trees.
The stiffly erect, leafless stems of this reddish-brown plant often grow in clusters, and are covered with glandular hairs. Pale yellowish-brown egg-shaped flowers hang in a long raceme. Stems grow for only one year, but remain as dried stalks for several years. The genus name, from Greek words for "winged seeds," refers to the net-like wing at one end of each minute seed that carries it to a new site as it is sprinkled from the capsule.
Pterospora andromedea is one of the more unusual plants of the western forests. It lacks chlorophyll and has no leaves, producing only a tall, rigid, reddish spike bearing clusters of pendent, egg-shaped, cream-yellow flowers at intervals. Flowers are formed of five short red sepals and a rounded corolla that opens to five curved lobes, with a small opening underneath; they are covered by short hairs and a sticky substance.
Flowers are followed by red-brown, pumpkin-shaped fruits which have tissue-like appendages underneath. The plant flowers only once, and the withered, brownish stems may remain upright for several years before falling.
Pinedrops is the common name for the plant Pterospora andromedea of the family Ericaceae; it is the only species in the genus Pterospora. It grows in coniferous or mixed forests in heavy soil. It is native to North America from southern Canada to the mountains of Mexico and is most commonly found in the western half of the continent, though small populations are found in the northeast United States and eastern Canada. The visible portion of Pterospora andromedea is an unbranched flower spike (raceme) generally 30-100 centimeter in height, though it has been reported to occasionally attain a height of 2 meters. The above-ground stalks are usually found in small clusters between June and August. The stalks are hairy and feel somewhat sticky to the touch. They have scale-like structures that are described by some authorities as vestigial leaves or sterile leafs. The upper portion of the red stalk has a series of yellowish, bell-shaped flowers that face downward. 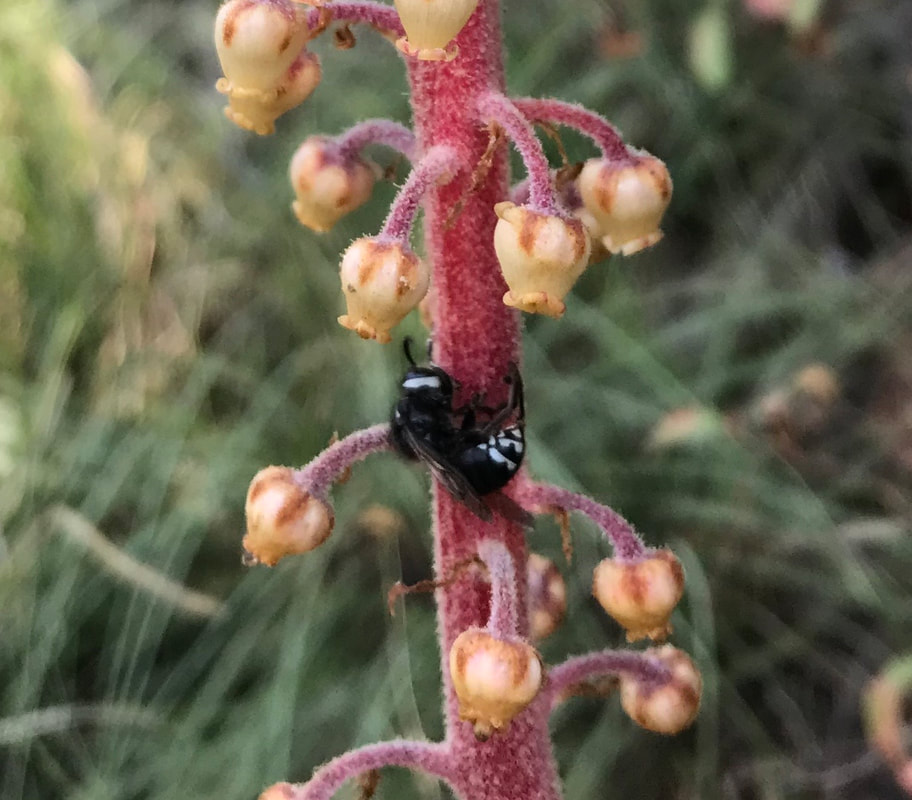