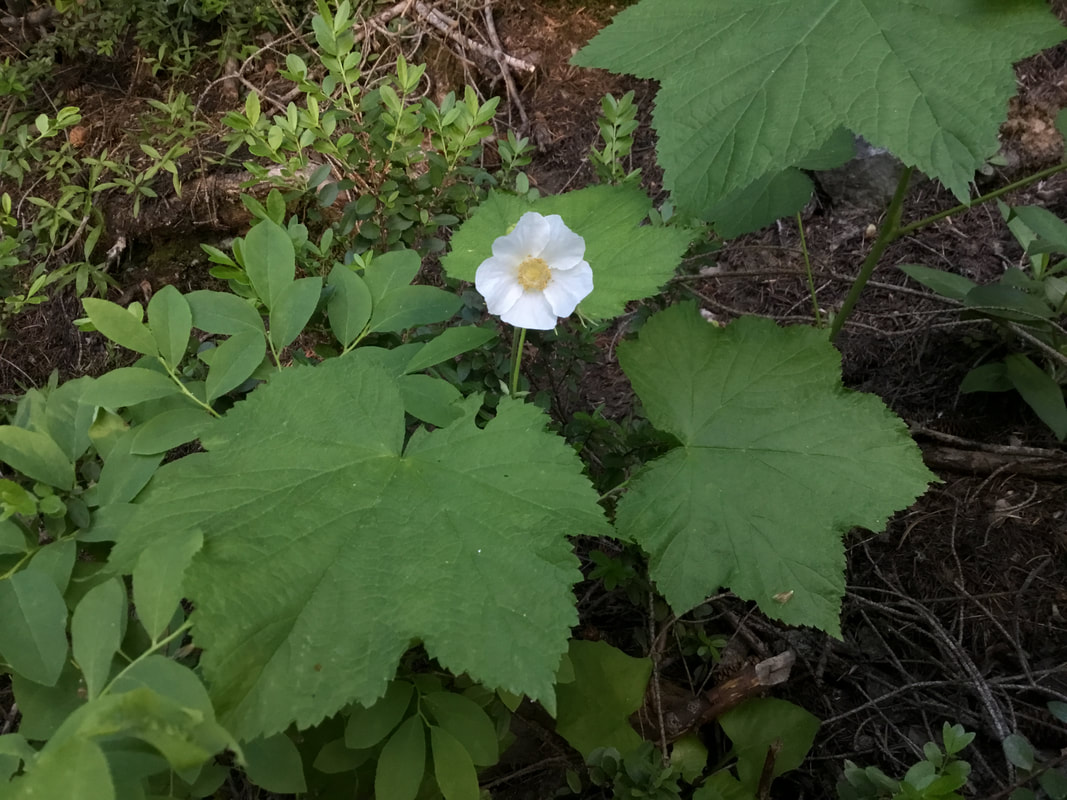 GENESIS NAME: Rubus praviflorus
DISTRIBUTION:  Rubus parviflorus is native to western North America from Alaska south as far as California, New Mexico, Chihuahua, and San Luis Potosí. Its range extends east to the Rocky Mountainsand discontinuously to the Great Lakes Region. It grows from sea level in the north, up to elevations of 3,000 m (10,000 ft) in the south.
SEASON:  Flowers June thru August
MEDICAL USE:  Many parts of the plant were used in folk medicine by Native Americans. A tea made from its leaves or roots was thought to be a treatment for wounds, burns, acne, or digestive problems;a tea made from the canes was thought to be useful as a diuretic. As of 2019, there is no evidence from modern clinical research or practice that Rubus parviflorus is effective for treating any disease.
Thimbleberry leaves can be used as "toilet paper" when in the wilderness.
POISONOUS:  No.  Thimbleberry is a favourite berry of children and adults as well as other wildlife.
EDIBILITY:  Thimbleberry fruits are flatter and softer (more fragile) than raspberries, but similarly have many small seeds. Because the fruit is so soft, it does not pack or ship well, so thimbleberries are rarely cultivated commercially.However, wild thimbleberries can be eaten raw or dried (the water content of ripe thimbleberries is quite variable), and can be made into a jam which is sold as a local delicacy in some parts of their range, notably in the Keweenaw Peninsula of Upper Michigan. Thimbleberry jam is commonly made by combining equal volumes of berries and sugar and boiling the mixture for two minutes before packing it into jars. Without sugar, the cooked berries, with a distinguishing sweet-sour taste, keep for a few days in the refrigerator.
FEATURES:The flowers are 2 to 6 centimeters (0.79 to 2.36 in) in diameter, with five white petals and numerous pale yellow stamens. The flower of this species is among the largest of any Rubus species, making its Latin species name parviflorus ("small-flowered") a misnomer.

LEAVES:  Thimbleberry leaves are broad and somewhat maple leaf-shaped, with 3 to 7 pointed lobes. They are covered in a soft fuzz. This shrub grows from 0.5 to 3 m tall. ... Like salmonberry, thimbleberry shoots were traditionally eaten by coastal First Nations in the early spring and summer before they became more woody and tough.
​FRUITS:   The plant produces edible composite fruit approximately a centimeter (0.4 inches) in diameter, which ripen to a bright red in mid to late summer. Like raspberries, it is not a true berry, but instead an aggregate fruit of numerous drupelets around a central core. The drupelets may be carefully removed intact, separately from the core, when picked, leaving a hollow fruit which bears a resemblance to a thimble, perhaps giving the plant its name.

Rubus parviflorus is a dense shrub up to 2.5 meters (8.2 ft) tall with canes no more than 1.5 centimeters (0.59 in) in diameter, often growing in large clumps which spread through the plant's underground rhizome. Unlike many other members of the genus, it has no prickles. The leaves are palmate, up to 20 centimeters (7.9 in) across (much larger than most other Rubus species), with five lobes; they are soft and fuzzy in texture.
Thimbleberry is a favourite berry of children and adults as well as other wildlife. The common name describes its appearance, as it does resemble a thimble from the top, where the thimble has little indentations to push down upon the needle. Imagine a raspberry but smaller, with smaller but more numerous fruitlets. These berries are tart and may be eaten raw, or cooked and made into jam or jelly and other food items such as pemmican or fruit leather. It is red when ripe. Look for thimbleberries in the mountains, in places that are shady, moist, and cool. The leaf is fuzzy and five-lobed, and may grow larger than a person’s spread hand. It should have two small lanceolate stipules at the base, stipules being a common feature of the Rosaceae (Rose family) to which this, blackberries and raspberries belong. Rubus is actually the Latin name for blackberry plants (brambles), which are close relatives of the thimbleberry. Parviflorus means ‘small flowers.’ They are white (sometimes lavender), slightly crinkled, and five-petaled; like a strawberry, the centre of the flower looks rather like a flattened, yellow form of the fruit to be produced.