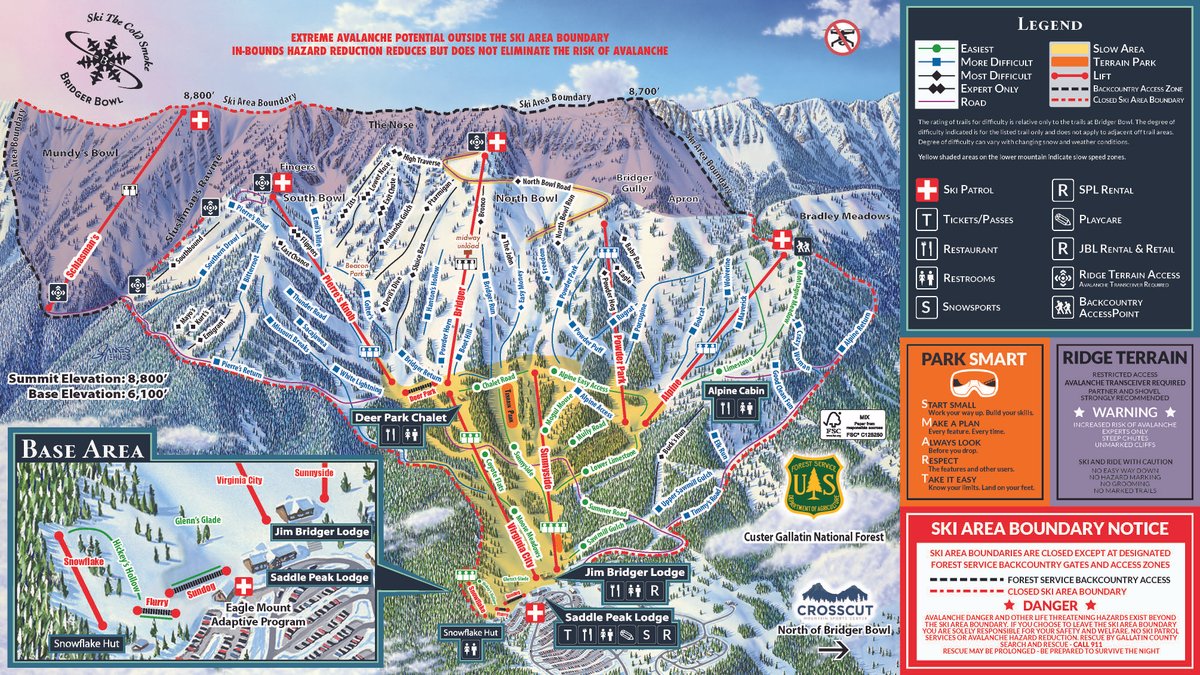 THE HISTORY OF BRIDGER BOWL RESORT

The History of Bridger BowlSkiing enthusiasts have enjoyed the area known as Bridger Bowl since the mid 1940’s. Motivated by this early interest, the State of Montana negotiated with land owners, and in 1949 purchased 120 acres for access to the Gallatin National Forest and a proposed state park and ski area.
A rope-tow was installed in 1951, but the Bridger Mountain State Park struggled and never really materialized. Undaunted, local ski enthusiasts organized themselves and continued with plans to develop a winter sports area.
The Bozeman State Park and Recreation Association was formed in 1954, and through the efforts of over 60 volunteers, theoriginal platter lift was opened to the public in January of 1955. The organization was granted 501(c) (4) Nonprofit Status with membership open to Montana residents 18 years of age and older. The association’s name was changed to the Bridger Bowl Association in 1971 and continues on today.
In 1956, an upper platter lift was added providing access to the North Bowl, Avalanche Gulch and Bronco Face. The lower platter lift was replaced by a T-bar in 1958.
Over the years, Bridger Bowl has become known for developing some of the nation’s best skiers and boarders, who have “cut their teeth” as Mogul Mice, Bridger Ski Foundation (BSF), Eagle Mount, Ski P.E. and MSU ski program participants.
As the popularity of skiing at Bridger Bowl has increased, so has the need to improve the existing area and add new terrain. In response, the Bridger and Alpine Riblet chair liftswere built in the 60’s.
Direct lift access to the South Bowl was provided with the Deer Park, Pierre’s Knob and Virginia City Riblet chair liftswhich were added in the 70’s.
Ridge skiing was opened to the public in 1973 with a few “hard-core” locals enjoying the backcountry-like conditions.
The Deer Park A-frame chalet built in 1959 was replaced in 1996 by today’s large post and beam structure. The original lower base area chalet, built in 1967, was replaced in 1988 by the Jim Bridger Lodge.
The Jim Bridger Lodge offers food and beverage service, equipment rental, retail sales and the Bridger Bowl Ski School, significantly improving guest services. Limited snowmaking was introduced in 1991. The first stairway from the parking lot to the Jim Bridger Lodge was added in 1994.
With the addition of the Sunnyside Quad Lift in 1995, the Alpine and Bridger lifts were shortened from the bottom up thereby increasing lift capacity 40%. The beginner’s area with the Snowflake Lift was added in 2000, and the Pierre’s Knob lift was upgraded to a CTEC triple chair in 2001. In 2004 Saddle Peak Lodge opened. Other improvements that year included the new Ski Patrol, Eagle Mount and BSF facilities.
In 2006 Bridger Bowl purchased a chair lift from Snowbird Ski Resort for our lift-served terrain expansion to the south. The newSchlasman's Lift opened in December 2008 and added 311 acres of lift-served ridge terrain for expert skiers only to the ski area.
In 2010 Bridger and Deer Park lifts were removed and a new Bridger lift was constructed to service upper mountain terrain. The old Alpine lift was sold to Mount Spokane in the summer of 2013 and replaced with two new triple chairs, Alpine and Powder Park, opening up more access to terrain on the north side of the mountain.
During the summer of 2014 Alpine Cabin was constructed providing restroom facilities, light lunches and outstanding views.
Schlasman RevivalOn February 10, 1885, sometime between 3:00 a.m. and 5:00 a.m., a tremendous avalanche ripped down from the top of the Bridger Mountains just north of Saddle Peak. At the base of the steep slope, 4 German coal miners, who had a small nearby claim, were still asleep in their log cabin. The powerful slide buried the mine entrance and destroyed the cabin, killing all four men.
According to the March 19, 1885 Avant Courier, their names were P.J. Schultz, Frank Hassert, James Hassert and P.B. Schlasman. Reports from witnesses said that three of the men appeared to have been killed instantly while they slept, but the body of James Hassert was never found. The recovered bodies were taken away in coffins, but the fourth coffin was left to weather and deteriorate in the bushes along the slide path. All men were bachelors except for P.B. Schlasman, who had a wife and three step-children. The tributary nearby where they mined, was named after him.
As had often occurred in those days, many European names were phonetically pronounced and spelled. Hence the name “Slushman” began appearing on Bridger Mountain area maps years ago. Although this ravine will still be identified with its current day spelling, it was deemed appropriate to recount the story behind Slushman's Ravine and restore its original "Schlasman" spelling in naming the new lift. The recycled Schlasman's lift is a reconditioned 1976 Doppelmayr double chair, formerly known as the “Peruvian” lift, purchased from Snowbird Ski Resort in Utah.
By all accounts, Schlasman and crew were the first documented avalanche related fatalities in the Bridger Mountains. It is sincerely hoped that all backcountry travelers fully appreciate the significance of this historical fact and commemorative naming of this lift.

Sources: March 19, 1885 Avant Courier and Bridger Canyon Cookery Gallatin County Pioneer MuseumBridger Bowl TodayThe outstanding effort and support of local volunteers, association and board members, businesses, staff, and dedicated pass holders over the past 50 years have enabled Bridger Bowl to grow from one rope-tow and a quonset hut to a major ski area with 2,000 acres of terrain, 8 chair lifts, 2,500 vertical feet, 3 lodges and a plan for future expansion as needed.
Over this time financial stability has been achieved and all net profit has been reinvested into the mountain. Bridger Bowl has become a cornerstone for Bozeman’s recreational community and a major contributor to the area’s vibrant winter tourism economy.
Bridger Bowl’s original mission still stands to this day: to plan, develop and maintain facilities and services in a financially sound manner which provide the best possible skiing experience at a reasonable cost to local, regional and destination skiers.