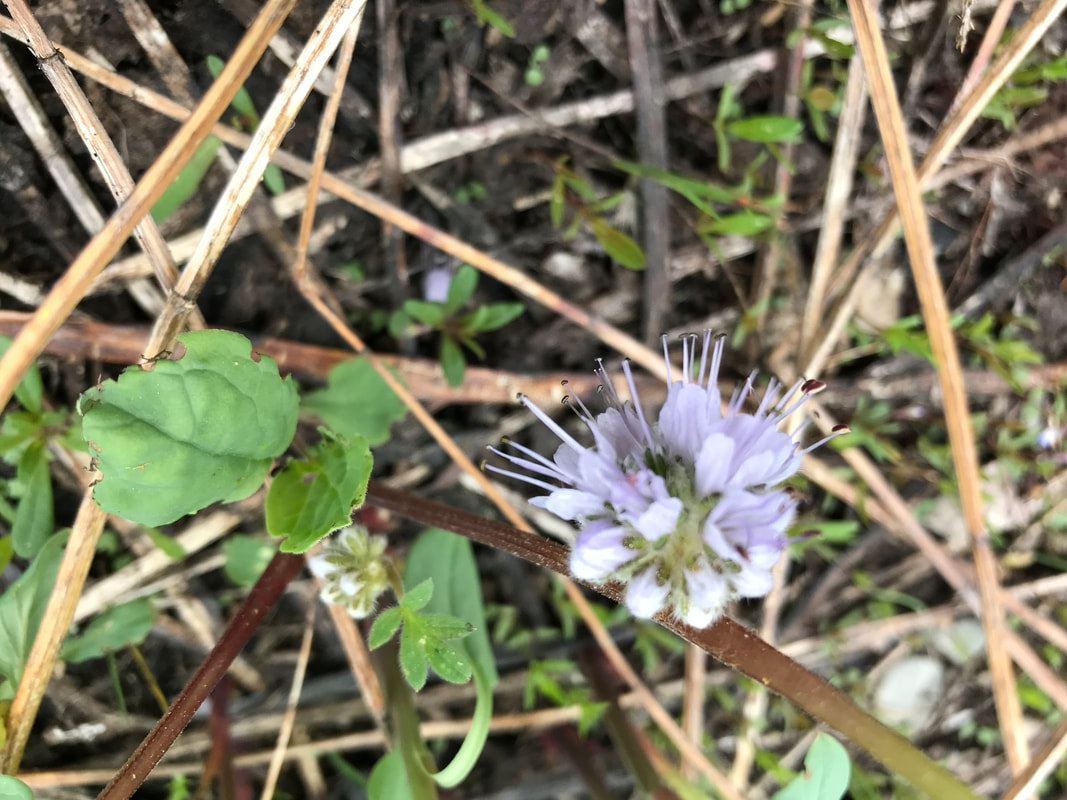 GENESIS NAME:  Hydrophylium capitatum
DISTRIBUTION:  U.S.A...WA, ID, MT, OR, WY, CO, CA, NV, UT.  CANADA...BC, AL
SEASON:  Flowers May to July
MEDICAL USE:
POISONOUS:  NO
EDIBILITY:  Ballhead waterleaf is another edible plant. It is shorter, found on the Western Slope, and bears its ball-shaped flowers under its fuzzy foliage
.FEATURES:  A low plant with round heads of small, white or pale purple flowers on short stalks among pinnately divided leaves.
​LEAVES:   All of the waterleaf species are fibrous-rooted perennials with bell-shaped white to purple flowers and stamens that extend well beyond the rim of the corolla. ... The flowers are usually clustered into a ball-like head borne amid or well above the pinnately lobed leaves.
FRUITS: capsules with 1-3 seeds.

The genus Hydrophyllum contains just eight species, all native to North America. Linnaeus came up with the name based on two Greek words meaning “waterleaf”, a term that has also persisted as the common name. One of the common eastern species, H. virginianum, can have water-like splotches on the leaves in early summer, a character that apparently inspired the name. All of the waterleaf species are fibrous-rooted perennials with bell-shaped white to purple flowers and stamens that extend well beyond the rim of the corolla. The flowers are usually clustered into a ball-like head borne amid or well above the pinnately lobed leaves. Waterleaf species might be confused with phacelias (genus Phacelia), which tend to have flowers in coiled clusters resembling the tail of a scorpion and are often either annual or have taproots.
Ballhead waterleaf (Hydrophyllum capitatum) has short stems and a dense cluster of purple or whitish flowers that are typically much shorter than the basal leaves. These flowers open from May to July, depending on elevation. In bud, the sepals and petals appear coarsely fuzzy, prompting another common name of woollen-breeches. The cluster of flowers can occur along the short, leafy stem, or right at the ground surface, depending on the variety (taxonomists recognize three varieties). Having flowers and fruits at ground level is often correlated with distribution of seeds by ants.
Ballhead waterleaf ranges across much of western North America, from British Columbia and Alberta to central California, Utah, and Colorado. It is often found in areas of bare soil or in thickets, forest openings, or moist slopes from the foothills up to nearly the upper tree line. In the past, Native Americans and pioneer settlers gathered the tender young shoots and fleshy-fibrous roots as a source of food.
Traditionally, Hydrophyllum, Phacelia, and related genera have been placed in the Hydrophyllaceae family. The family has usually been considered closely allied with the phloxes (Polemoniaceae), nightshades (Solanaceae), and morning glories (Convolvulaceae) based on floral and fruit similarities. Recent studies emphasizing chemistry and genetics suggest that Hydrophyllaceae should be lumped with the borage family (Boraginaceae). This proposal remains controversial, as the two groups differ significantly in fruit anatomy. More research is needed to resolve the issue.
​Deep Creek cuts a steep and narrow canyon into the White River Plateau and Sheep Spring, at 10,000 feet, releases an ephemeral stream that is one of its many tributaries. I camped at Sheep Spring for its grand view down Deep Creek Canyon to the Colorado River with the Gore Range on the horizon—I imagined it would be stunning at dawn. After the dawn shot, I looked around to see what was in bloom and found a native wildflower with the strange name of ballhead waterleaf, Hydrophyllum capitatum.
The common name and Latin binomial may seem strange, but they are descriptive. Hydrophyllum translates to waterleaf, and both refer to the fleshy, succulent leaf stems, though one author mentioned that the name derives from a species with blotchy leaves that appear to have water on them. Capitatum refers to a bloom that forms a globe, or a ballhead.


Ballhead Waterleaf blooms develop below the height of the leaves, in a tight globe. Click on photo to see larger image. Photo by Jeff Mitton.


The genus Hydrophyllum evolved in North America and today it contains eight species, four with eastern distributions and four with western distributions, separated by the Great Plains. All species are found in shady sites along creeks and rivers or in moist sites. One of the eastern species is biennial but all others are perennial, meaning that they live several to many years. All have roots in a rhizome, though the roots of ballhead form a cluster of small rhizomes that resembles fingers. Flower colors vary among species from white to purple and ballhead has lavender flowers.
None of the Hydrophyllum species has fragrant flowers and all are capable of self-fertilization. Ballheads are attended by a variety of flies, which forage on nectar and also a variety of bumble bees and mason bees, which forage for pollen. The stamens are longer than the petals, holding the anthers outside the corolla, conspicuously presenting pollen and making the ballhead resemble a pincushion. Ballhead flowers open at dawn and all pollinators reported so far attend the flowers during the day—nocturnal pollinators have not been reported.
I was surprised to find a paper reporting that hummingbirds have been seen visiting ballhead waterleaf flowers. Three scientists working at the Rocky Mountain Biological Laboratory in Gothic, Colorado, based the paper on decades of pollination observation. Most naturalists share the common perception that hummingbirds visit reddish, unscented blooms that have dilute nectar deep within long corollas or spurs. This general perception is warranted, but it is relevant to note that hummingbirds perceive all of the colors in the spectrum and show no preference for red.
Furthermore, young hummingbirds are known to forage at a great variety of flower colors and types. Years of observing pollinators revealed that in addition to long, red flowers, hummingbirds also visited point-leaf manzanita (white), Nuttall’s larkspur (purple), glacier lily (yellow), ballhead waterleaf (lavender), creosote bush (yellow), peach thorn (green and white) and sagebrush bluebell (blue).
To determine whether hummingbirds going to these flowers were making a mistake or were utilizing viable, alternative sources of energy, nectar was taken and evaluated in the context of a hummingbird’s requirements. They found that these flowers violating the classic notion of hummingbird flowers provide sufficient energy for birds to carry on normal activities and for refueling stops during migrations.
The attribute that is most puzzling about ballheads is the placement of their blooms, which are below the lowest leaves. The plants high on the White River Plateau were small, perhaps 5 to 8 inches tall, which meant that the blooms were very close to the ground. An extremely low flower presentation is usually seen in species that rely on ants to disperse their seeds. Hydrophyllum species are generally considered to rely on water for seed dispersal. Ants have been observed on ballhead, but ant dispersal of seeds has not been reported, perhaps because no one has looked for it.
A research opportunity awaits a patient person who would enjoy watching ants and plants high in the mountains. 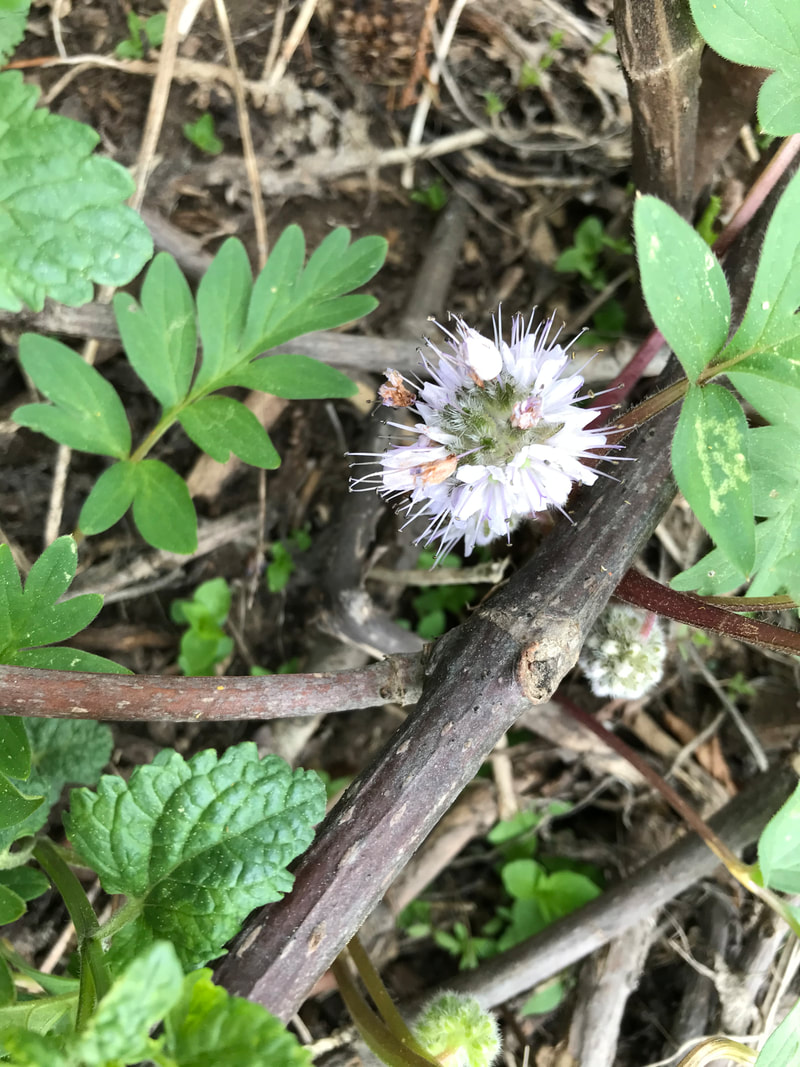