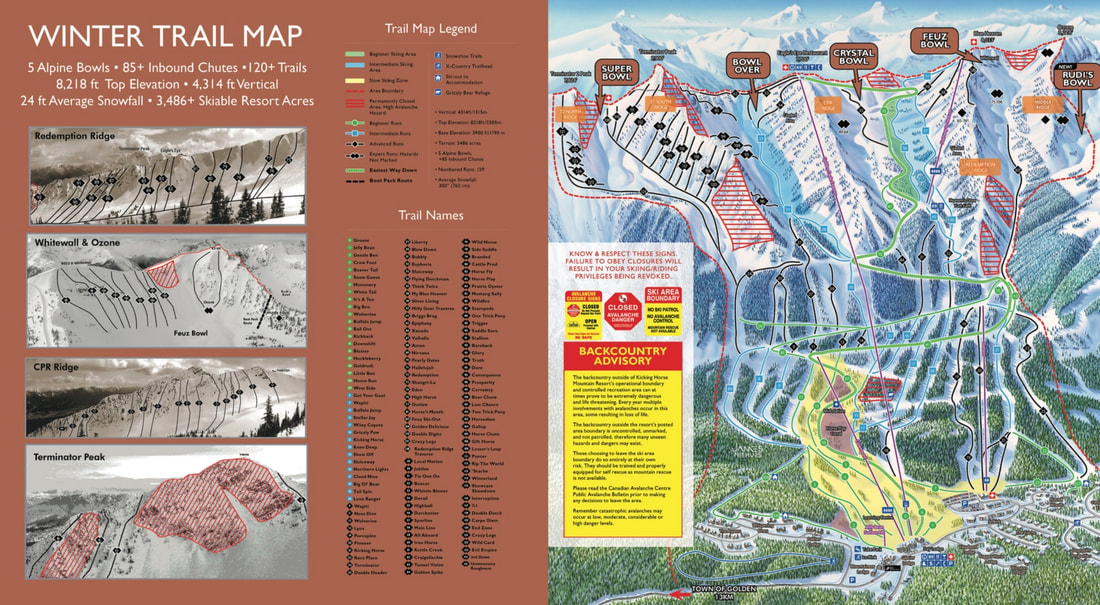 Only when they were about to toss the dirt on your grave did you come to your senses. That’s what the legends say happened to James Hector in 1858 as the Scottish doctor/geologist travelled the uncharted waterways of western Canada in search of a route for the Canadian Pacific Railway.
Truth or not, the rolling white water river they were camped on was named in honour of that furious horse. The name also suits the terrain at the Kicking Horse Mountain Resort 10 minutes up White Tooth Mountain from Golden, B.C.
Like Hector, you should be prepared to be kicked, bucked off and trampled. This mountain is wild.
The town of Golden hasn't always been the outdoor adventurer destination that it is today. It was a railway town and a forestry base for many years. The CPR has to be given credit for bringing in the first Swiss guides in the early 1900s. The tourists that arrived by train were escorted by guides into the backcountry and up those amazing peaks.

By the 1930s, the community had a few slopes to ski and even held jumping competitions. In 1955, the Kinsmen built the first rope tow on the hill near the rodeo grounds and in 1968, a 1,000 foot-long rope tow was taking skiers up Mount 7 on the north side of the river until 1980. Six years later, volunteers cleared some runs on the north-facing slopes of Whitetooth Mountain, and installed the Pioneer Chair and one T-bar on 2,000 feet of vertical. The Whitetooth Ski Area was a hit with locals and word spread quickly about the snow and the potential to expand.

In 1996, Vancouver architect and ski resort visionary Oberto Oberti stood at the base and envisioned a four-season resort. The next year the community voted 97 per cent in favour of selling the ski area to Oberti and the European company, Ballast Nedam. New ownership would do two things; create a destination for year-round tourism and boost the sagging economy of the town.
Oberti’s vision was to create a skiing experience much like that in the Alps where people ski from the peak to the valley using one long lift. The Golden Eagle Express gondola was the first level, walk-in gondola in Canada and in 12 minutes transported skiers to the mountaintop some 4,133 feet of vertical away.

Kicking Horse opened in 2000 to the sheer delight of skiers and boarders. Two hotels at the bottom were spitting distance to the gondola.
It was instant nirvana. From the peak the views stole hearts and fanatics sighed in ecstasy when scanning the alpine bowls, steep chutes, pillowy glades and wide long trails that sprawled beneath their ski tips. But there was one itty-bitty problem - someone forget to notify the snow gods that they were open for business. The first few seasons saw some skiers curse the short seasons that ended on the last brown pitch to the base. Snow-making machines for the lower elevation would have to come in handy.
The snow came back and Kicking Horse and the fanatics returned each year, converting more “Horse” lovers. It grew in popularity with the skiers who would drive that extra mile looking for fresh tracks, wide open spaces and kickass terrain. Private homes and boutique hotels filled in the slope to the west while more runs and a few more lifts were added.
In December 2011 there was big news. Resorts of the Canadian Rockies (RCR) was signing the dotted line on a sales agreement. Oberti had accomplished his goal of creating another successful resort and RCR wanted another resort on the Powder Highway in their portfolio.
Today, Kicking Horse has four lifts taking guests to over 2,800 acres of skiable terrain with a stash of over 1,000 more acres waiting to be opened. There are 121 marked runs, four bowls, countless chutes and terrain to challenge everyone with 20 per cent perfect for beginners, 20 per cent for intermediates, 45 per cent for the advanced skier and 15 per cent ready to kick the experts into next week. Each winter the summit sees an annual snowfall of over seven metres while the mid-mountain runs are covered in almost four metres of that champagne powder.

The resort has six dining options on the hill including the Eagle’s Eye - Canada’s highest elevation restaurant. Sitting at that bar for après ski snacks you’ll see peaks from five national parks. If your pocketbook permits it, book in for a night at the top of the mountain in the Eagle’s Eye Suites. For the rest of us there are condos, hotels and private homes to rent. To round out the winter experience there is a tubing park, snowshoe trails, and a skating rink in the plaza. Dawn Mountain Nordic trails are minutes west of the day lodge offering 33 kilometres of groomed trails. Heli-skiing, dog-sledding and snowmobiling is nearby.
Summer experiences include some of the high-country trails for hiking and mountain biking. If you are new to the sport, the mountain biking school will introduce you to the highest and longest bike park in Canada. Music fills the air with the summer dinner concert series showcasing award winning cuisine from the Eagle’s Eye Restaurant pared with live music.

And don’t forget about Boo. During the winter the local grizzly bear is napping as you glide past his den. In the summer the orphaned bear is king of the 22-acre natural mountainside enclosure.
Kicking Horse Mountain Resort is recognized world-wide for its exceptional snow, terrain and accommodations. The best part about it is it’s still got that small-town charm with with one hell of a vertical rodeo.
For more information, head to the official Kicking Horse website
Learn about Fernie Alpine Resort, where legendary powder is credited to a legend.
Show your stoke for the awesome history of Kicking Horse by sharing this page with your friends!