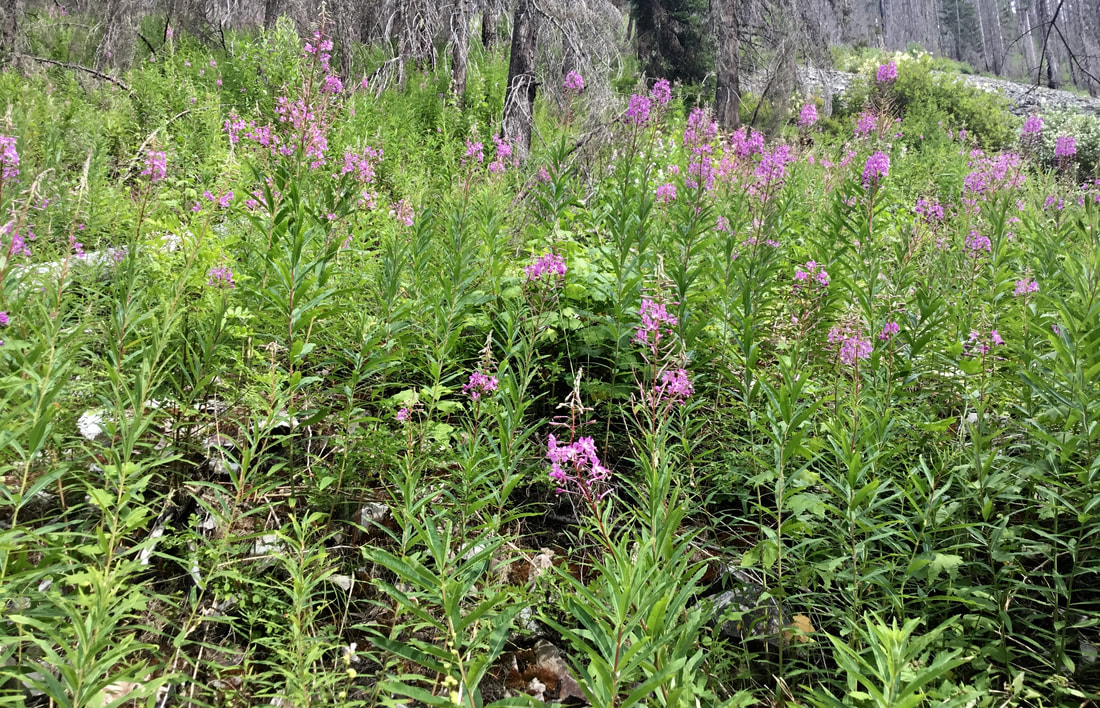 GENESIS:  Chamerion amgustifolium (L.) Holub
DISTRIBUTION: All of Canada and most of U.S. except the Deep South
SEASON:  Fireweed blooms from June to September, and the typically magenta flowers (2 to 4 cm wide with 4 petals) grow in clusters at the apex of the stems. In late summer, fireweed seeds disperse on the wind thanks to the fluffy tuft of white hairs at their tip.
I have two friends that toured Alaska a few years ago. They called their presentation "Following the Fireweed". They spent 15 weeks in Canada, starting where fireweed first starts, and followed it until it stopped blooming at the end of it's season.
MEDICINAL USE:  Fireweed is an herb. The parts of the plant that grow above ground are used to make medicine. Fireweed is used for pain and swelling (inflammation), fevers, tumors, wounds, and enlarged prostate (benign prostatic hyperplasia, BPH). It is also used as an astringent and as a tonic.  Fireweed: Is a great anti-inflammatory especially for acne prone skin. It also soothes dry, irritated skin types. ... It retains moisture, fights free radicals and helps maintain the skin's youthful appearance. The high amounts of zinc and vitamin E improve skin tone, fight acne and help with skin renewal.
POISONES:  The fire weed in-flower is the most toxic. When ingested it can be toxic to the liver and neurological system eventually leading to death. People should also be aware that fireweed is also toxic to humans if ingested and be sure to wear gloves when removing this plant. New  or hungry stock or new stock not previously exposed to fireweed are the most at risk of poisoning. All parts of the plant at all stages of growth are toxic. Hay, silage or grain that is contaminated with fireweed plants or their seeds can also be toxic.
EDIBLE: Traditionally, fireweed shoots are eaten like vegetables, and the leaves can be eaten like greens or made into tea. The young shoots are hung and dried for a few days to make them sweeter. The insides of older stems can be scooped out and eaten.  The reason this sting is so painful is that it has stinging hairs that are easily embedded in the skin when pulling it barehanded. By doing this, you encourage venomous hairs to become embedded in the skin thus increasing the agony that is pending and it is a pain that will last for hours.
FEATURES:  The name fireweed stems from its ability to colonize areas burned by fire rapidly. It was one of the first plants to appear after the eruption of Mt. St. Helens in 1980.  I LOVE the smell of dried fireweed, which has notes of berry and citrus, and find that I crave it sometimes. Making Tea– Use one small handful of leaves per cup of boiled water and steep about 15 minutes. Drink up to three cups a day. The tea has a pleasant mild taste and can be mixed with other herbs for flavor.
​LEAVES:
FRUIT:  ​A 4-sided, 4-celled capsule, split into 4 valves. It is often purplish and up to 3 inches long, and contains 300 to 500 seeds. Seeds have a tuft of long hair on one end. The fruit develops rapidly, and buds, flowers, and mature fruit can appear on the same plant.

Fireweed is a tall showy wildflower that grows from sea level to the subalpine zone. A colorful sight in many parts of the country, fireweed thrives in open meadows, along streams, roadsides, and forest edges. In some places, this species is so abundant that it can carpet entire meadows with brilliant pink flowers.
The name fireweed stems from its ability to colonize areas burned by fire rapidly. It was one of the first plants to appear after the eruption of Mt. St. Helens in 1980. Known as rosebay willowherb in Great Britain, fireweed quickly colonized burned ground after the bombing of London in World War II, bringing color to an otherwise grim landscape. Fireweed is the official floral emblem of the Yukon Territory in Canada.
A member of the Evening Primrose family (Onagraceae), taxonomists previously included fireweed in the Epilobium (willowherb) genus, but it is now placed in the Chamerion (fireweed) group. The Evening Primrose family contains about 200 species worldwide.
A hardy perennial, fireweed stems grow from 4 to 6 feet high but can reach a towering 9 feet. The numerous long narrow leaves scattered along the stems are the origin of the species name "angustifolium" (Latin for narrow leaved). The leaves are unique; leaf veins are circular and do not terminate at the leaf edges. A spike of up to 50 or more pink to rose-purple flowers adorns the top of the stems from June to September. The four petals alternate with four narrow sepals, and the four cleft stigma curls back with age. Each flower is perched at the end of a long cylindrical capsule bearing numerous seeds. Seeds have a tuft of silky hairs at the end. A single fireweed plant can produce 80,000 seeds! The delicate fluffy parachutes can transport seeds far from the parent plant. The fluff was used by native peoples as fiber for weaving and for padding.
Fireweed was important to native people around the world. Choice patches of fireweed were even owned by high-ranking families in British Columbia. Tea was made from the leaves. High in vitamins A and C, fireweed shoots provided a tasty spring vegetable. Flowers yield copious nectar that yield a rich, spicy honey. Today, fireweed honey, jelly, and syrup are popular in Alaska where this species grows in abundance.
​Fireweed can be a beautiful addition to the home garden. Since it reproduces readily from rhizomes as well as from seed, fireweed can quickly take over a garden if left unattended. You will be rewarded for your efforts however, since the colorful flowers are sure to attract lots of pollinators. 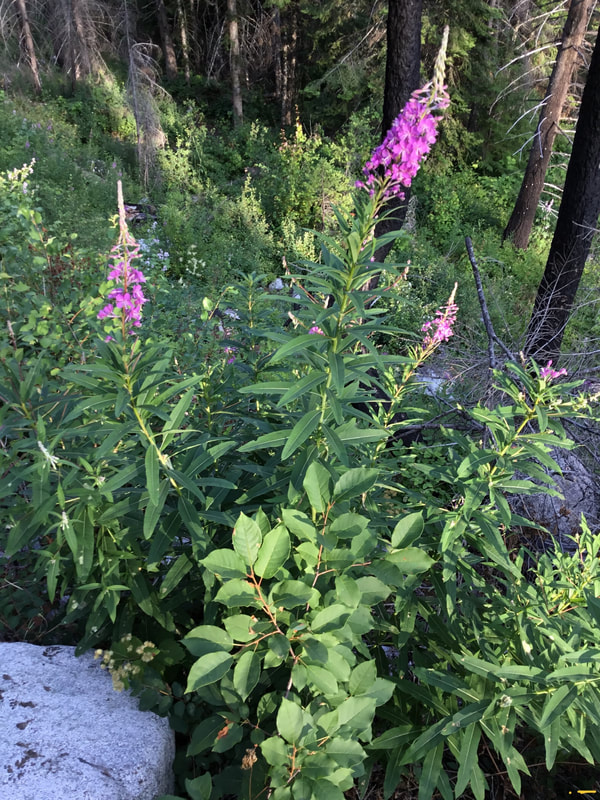 FIREWEED GROWS THROUGHOUT OUR REGION.
​IT'S GROWTH STARTS FROM AN AREA THAT HAS RECENTLY BURNED 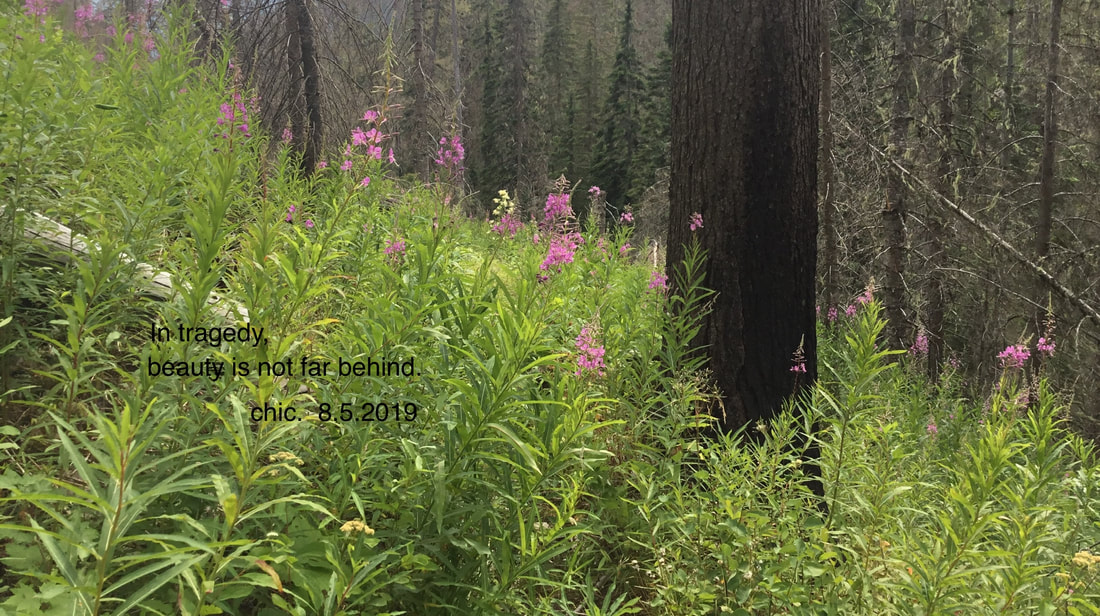 THIS IMAGE WAS TAKEN ABOVE THE SETTLER'S GROVE OF ANCIENT CEDARS 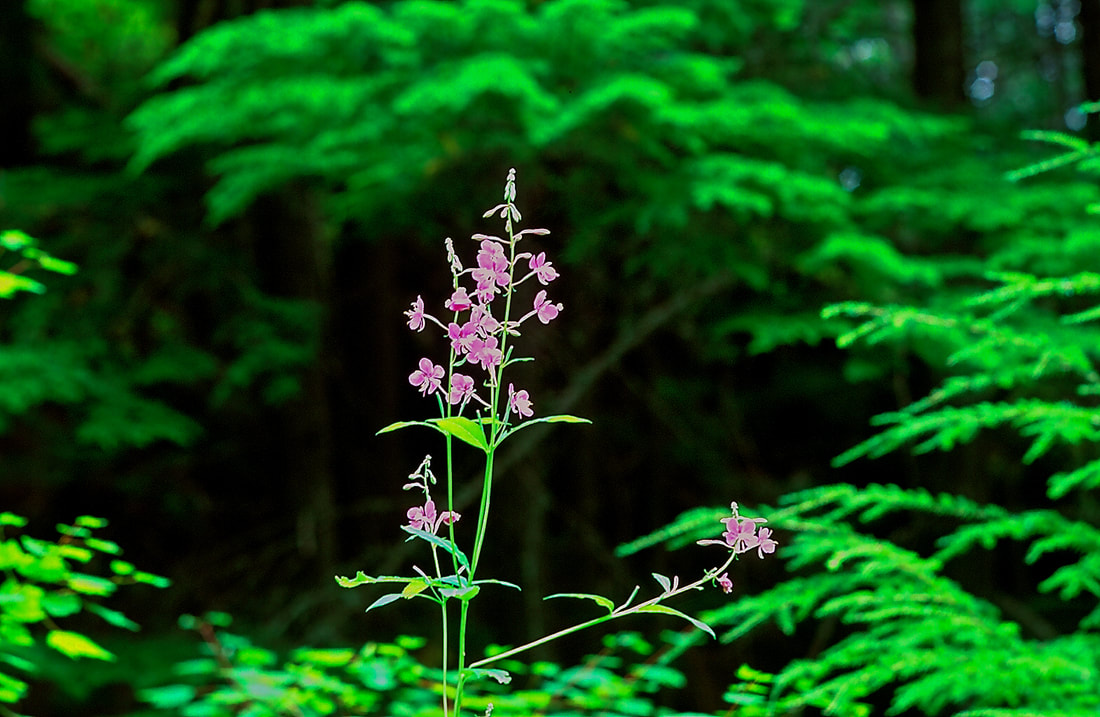