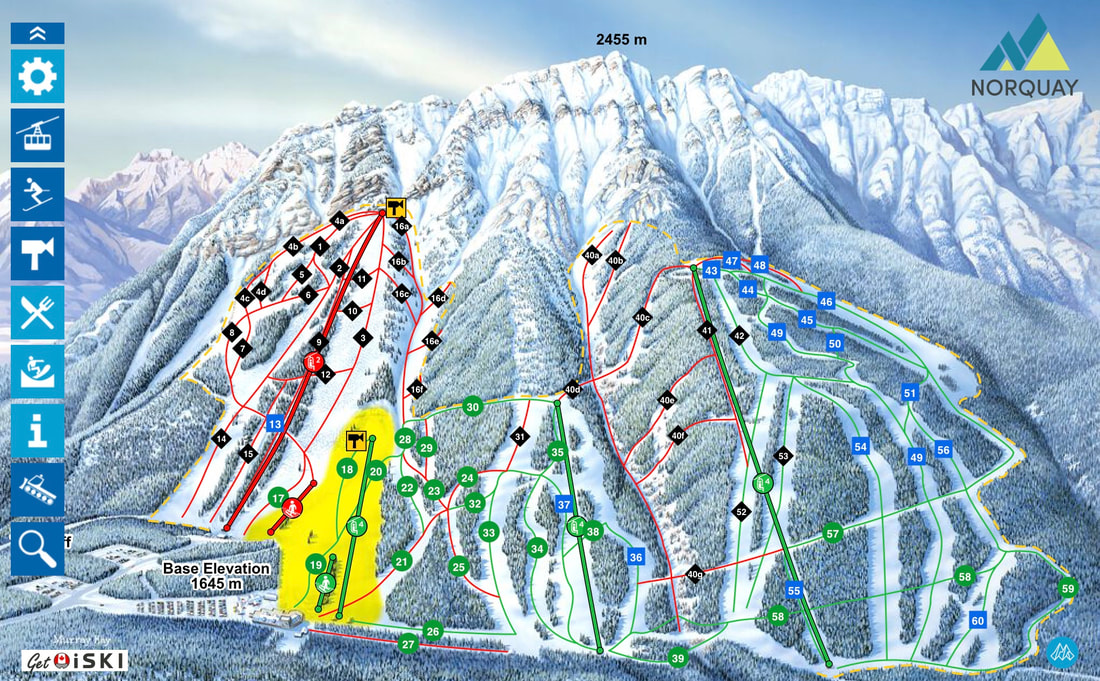 From the legendary ski racers that have claimed their glory on these slopes since the 1930s, to beginners clipping on skis for the very first time, Norquay’s for everyone.
To ski or ride Norquay, is to do it completely on your terms. We’re the high-action mountain with zero pressure (plus, we’re all really nice here – ask us for our favourite Norquay spots).
Ski lines on our steeper terrain, take it easy on our gentle, undulating groomers and perfectly-groomed beginner runs, or test your tricks-status on our terrain park.
Add Desc

Our National Park’s deep-rooted ski culture started right here, when Swiss and Austrian mountain guides arrived in Banff in the early 1900s, bringing a strong passion for skiing with them.  It was ski pioneer Gus Johnson that would build ski jumps and teach local children to ski, but Banff skiing needed a place to officially call home.
Johnson started to seek out a suitable place for a ski camp, and chose a slope 1,000 feet above the town of Banff, on Mount Norquay.  The rest, as they say is history.
We’re a Banff Classic and Proud of It!Our first ski cabin was built in 1927 and the first rope tow was installed in 1941. The North American or “Big Chair” has been providing riders with views high above the Bow Valley views since 1948, making it one of the oldest chairs in North America.
Then there’s our ski racing heritage, with the first slalom courses set back in 1929. Norquay held the North American Champions races in 1937 and still to this day hosts several competitions a season.
Bridging the Past with the PresentFrom humble beginnings, Norquay continues many of the traditions from its past, hosting special events such as the Annual Bruno Engler Ski Race – named after Banff-based mountain guide, photographer, ski instructor, stunt double and filmmaker, Bruno Engler, who started it – this is

Read MoreCanada’s longest-running ski race, marking its 52nd year in 2018.
The closest mountain to Banff, Mount Norquay continues to build on its dedication to families and the locals that have skied here across generations.
Norquay has maintained its place as the locals’ hill for over nine decades, it’s Banff’s backyard – all while hosting skiers, riders and sightseeings from all corners of the globe.