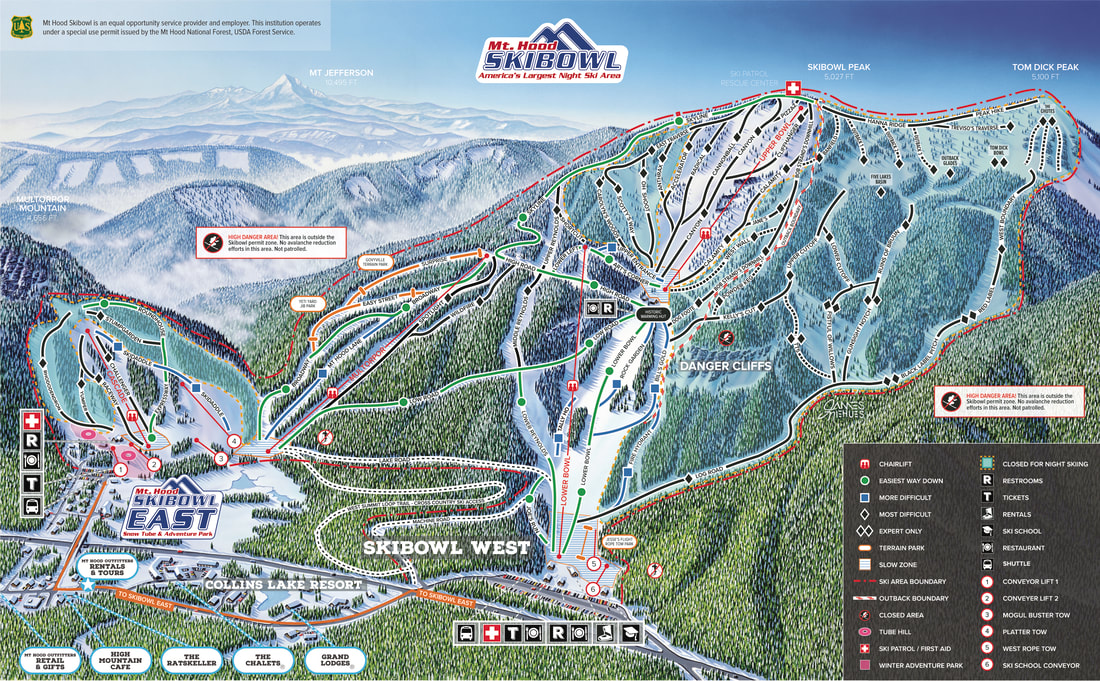 Mt Hood Skibowl is less than an hour from Portland and offers some of the best terrain on Mt. Hood.  The ski area is known as America’s Largest Night Ski Area, with 36 lighted runs, 69 day runs and has the most lit black diamond runs in Oregon.

Mt. Hood Skibowl is an equal opportunity recreation provider operating under a special use permit from Mt. Hood National Forest.

MT HOOD SKIBOWL HISTORYMt. Hood Skibowl’s origin dates back to 1928, making the resort one of the oldest remaining ski resorts in the country. The ski area began as two separate resorts Skibowl and Multorpor. While Skibowl’s name was derived from the natural shape of it’s Upper Bowl, Multorpor’s name came from the combination Multnomah County, Oregon and Portland. The following is a brief timeline of the resort’s storied history.

1928 The famous Jump Hill on Multorpor Mountain was developed by Everett Sickler.

1935 Work began on the Historic Warming Hut located on the shelf between Lower and Upper Bowl at Skibowl. It was completed in 1937.

1937 The first ropetow was installed at Skibowl by French Boyd. The Historic Mid-Mountain Warming Hut served as the bottom terminal and carried passengers halfway up Upper Bowl. Powered by an automobile engine, the tow was fast and riders held on with custom hooks. If you carried a gallon of gas to the top, you could ski for free.

1938 Raymond Hughes built Multorpor Mountain’s first rope tow. The tow was powered by a Dodge truck engine and operated on the run now called Raceway on Cascade Chair. The resort charged 5¢ per ride or $1 per day.

1946 The first Lower Bowl chair was installed by “Sandy” Sandberg. Built with wooden lift towers, the single chair ran from what’s now the Rental Shop up the west side of Skibowl’s Lower Bowl.

1949 The current Multorpor Lodge was built by George Beutler, who operated Multorpor’s ropetow at the time. Upper Bowl Chair. This new Riblet double chair was the first chair to use steel towers.

1961 The Multorpor Mountain Company erected the Multorpor Chair. It was the fastest, highest capacity, most advanced chair of its time. The A-frame addition to Multorpor Lodge was also built at this time.

1964 Carl Reynolds and Everett Darr bought Skibowl and the two resorts were joined under the name Multorpor Inc. 1965 Multorpor Inc. installed a Riblet double chair on Lower Bowl at the present location.

1967 The Starlight Lodge was built.

1980 Summer recreation began at Skibowl with the installation of the Alpine Slide.

1993 Skibowl purchased the first winch cat in the northwest, which enabled it to groom the steeps of Upper Bowl. They also add to summer attractions by putting in the 100′ Bungee Tower and adding several other activities.

1998 The Lower Bowl is completely rebuilt. Everything was replaced but towers and chairs. Upper Bowl also received a new drive, motor and additional towers to shore up what was the highest chairlift span in the northwest.

2005 Multorpor Chair and the Lower Bowl lift terminal are completely rebuilt, resulting in shorter rides, faster chairs and more seating. Also, the Rental Shop is remodeled and the bathrooms are finished at the Historic Mid-Mountain Warming Hut.

2006 A new Summer Tube Hill is added to The Adventure Park at Skibowl’s East side.

2009 Major renovation to the public areas and rest room facilities at Skibowl.