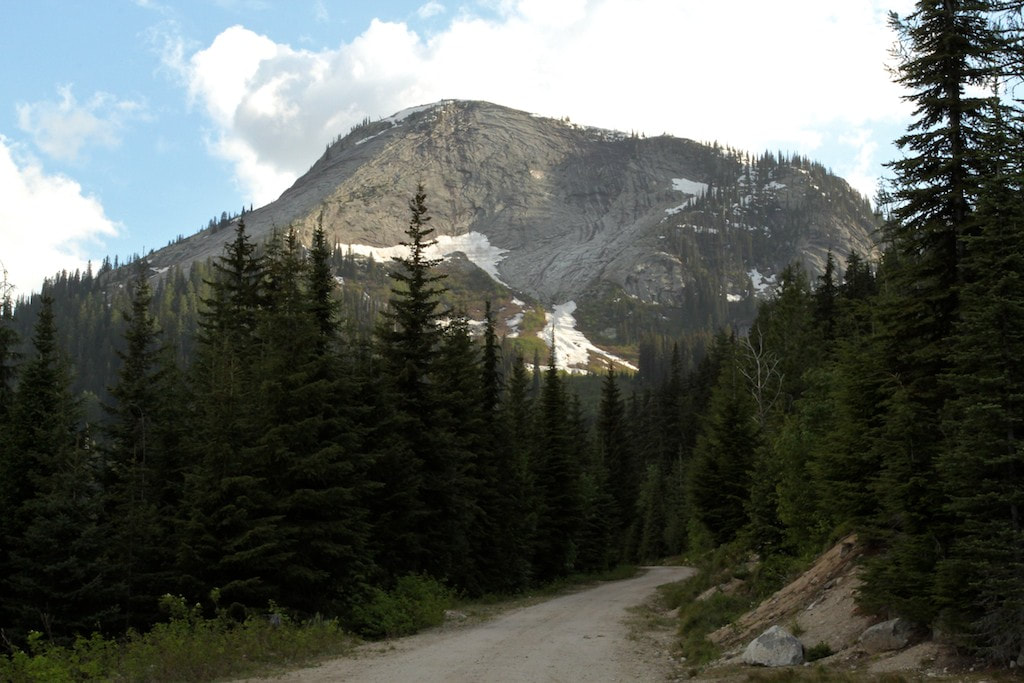 Myrtle’s Turtle is a huge dome of exposed granitic rock.
Lets discuss the formation of granitic rocks. Going deep beneath the surface reveals the variations of the granitic rocks in the Selkirk Mountains. Igneous rock forms by the crystallization of molten rock. If the molten rock is below the Earth’s surface it is called magma and if it reaches the surface it is called lava. Igneous rock forms from the crystallization or “freezing” of magma. As hard as it is to imagine, hot magma freezing it does but at temperatures way hotter than water. Magma typically freezes at temperatures ranging from 650 C to 1,100 C (1,202 F to 2,012 F).
The Kootenai Valley and the Selkirk, Purcell and Cabinet Mountains are the main geographic features in the county. One geologic feature is responsible for how we see them today–the Purcell Trench. 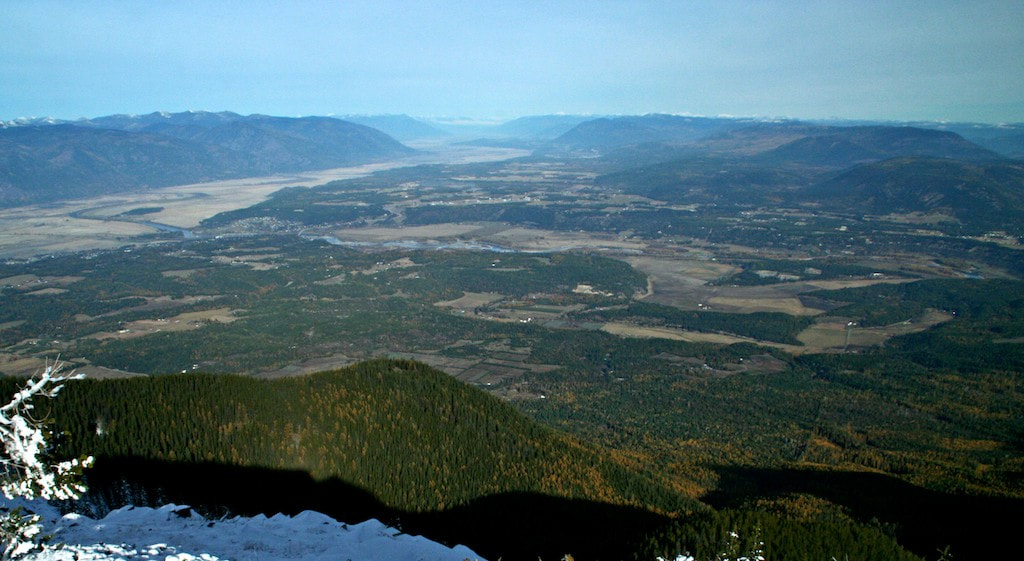 Valleys can be made by erosion (water or glaciers) or by an underlying geologic structure. The Purcell Trench is too long, wide and straight to have been formed by erosion and, therefore, it is a result of a major bedrock structure. 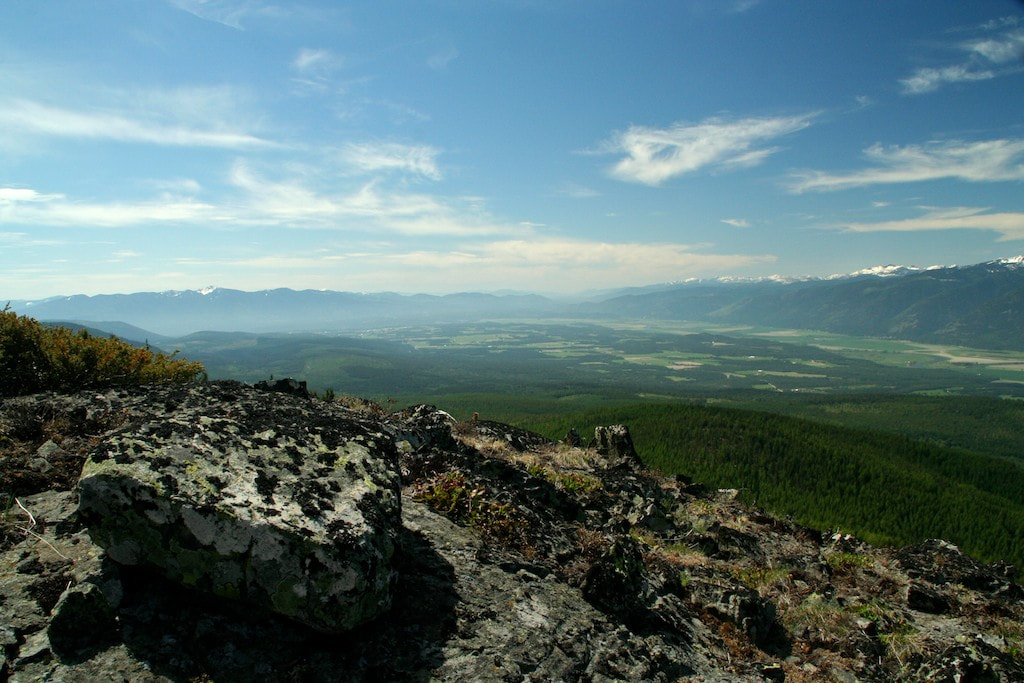 Purcell Trench south as viewed from Tungsten Mountain in the Purcells
One bedrock structure responsible for creating valleys is a fault. The basin and range mountains in Nevada formed because of faulting. A fault is a fracture in rock where sliding occurs (both sides don’t have to move, often it is one piece moving against the other stationary side). The San Andreas fault in California is one example.

There has to be a reason for rock to move and in the case of the Purcell Trench  it was because this area was being stretched. As one can imagine, rock isn’t a likely candidate for stretching, so what happens is faulting. Faulting releases the tension built up by stretching. 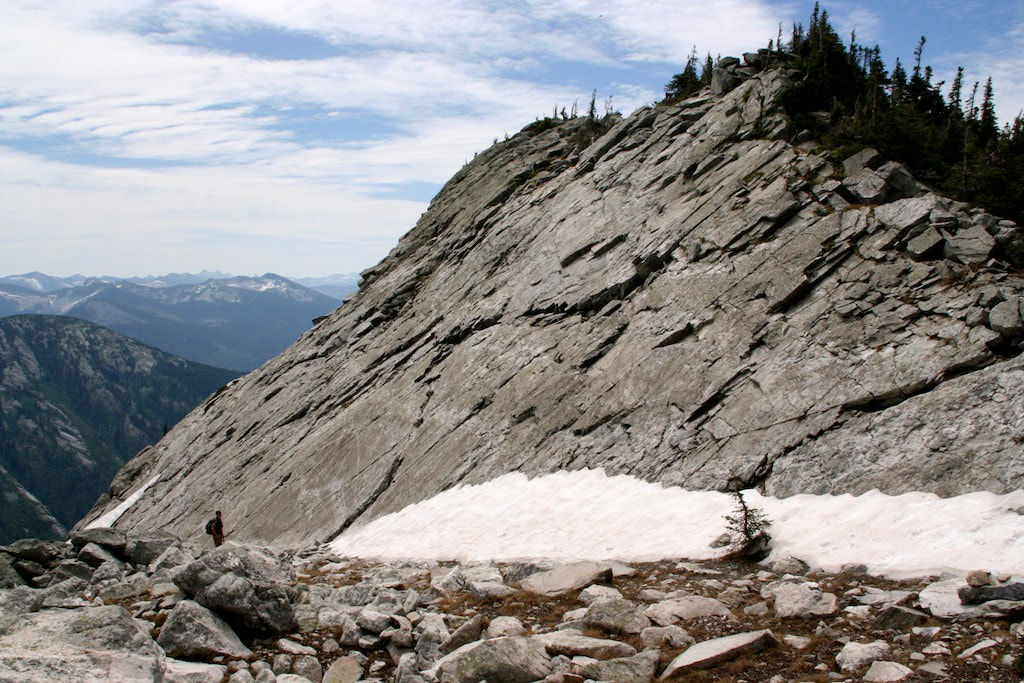 Exposed granite in the Selkirks cooled several miles below the earth’s surface
What caused the stretching? Intruding magma. Long before the ice ages, a large mass of granitic magma was rising in the Earth’s crust under the present day Selkirk Mountains. As the giant bubble of magma neared the surface, it weakened the crust by stretching it. The giant bubble of granitic magma cooled before it reached the surface, creating a giant granite batholith. But the tension was still there from the stretching. Consider that the granite cooled miles below the surface and now is exposed in the Selkirk Mountains. Something had to move to make the granite visible, it wasn’t eroded away.

Quite a bit of imagination is necessary to envision what happened. The rock that is now the Cabinet and Purcell Mountains was once on top of where the Selkirk Mountains are located. When the magma intruded, it bulged up the overlying rock, much like a bubble forming in pizza crust. To release the tension, a fault formed along the current eastern front of the Selkirk Mountains. Over millions of years the rock on top (the current Purcell and Cabinet Mountains) slowly slid down the fault in an easterly direction into their current position, leaving an open trench behind. That open trench is now called the Purcell Trench. 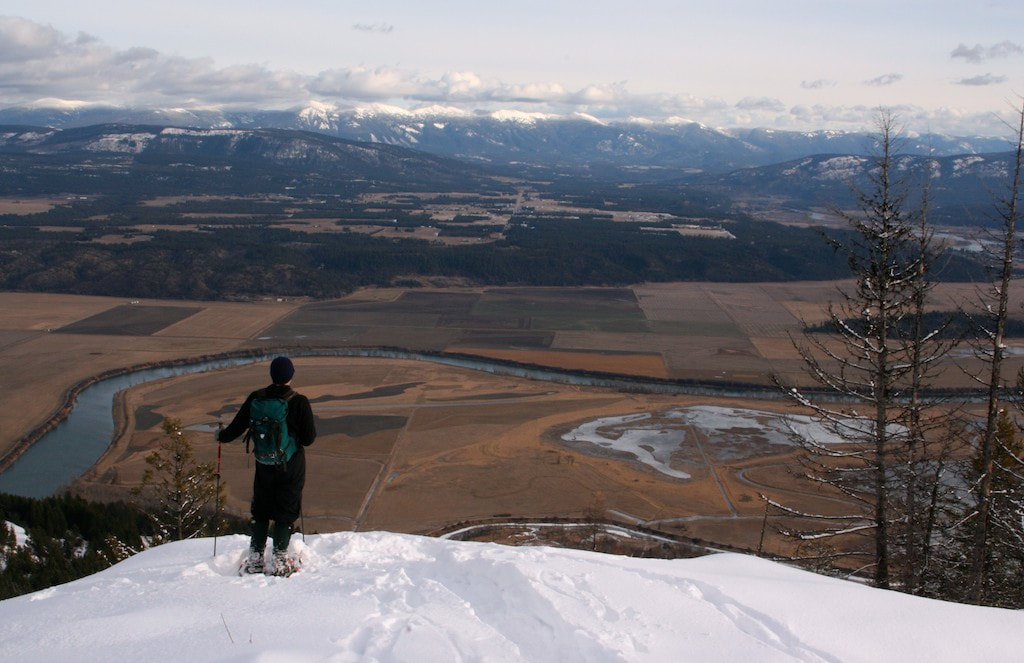 Looking east across the Purcell Trench at the Purcell Mountains
As the overlying rock slide eastwards, the granite batholith was exposed.

The rocks around the fault zone are under tremendous pressure as the faulting occurs, which results in folding and metamorphosing the rocks. Rocks along the eastern front of the Selkirk Mountains may have a shiny look to them, with all the crystals aligned in one direction–these rocks were altered by the heat and pressure in the fault zone.

Have you taken a close look at the rock cut where the Myrtle Creek Road takes off from the West Side Road? This rock was folded deep in the crust along the fault zone as the Purcell Trench was being formed.

The Purcell Trench doesn’t look the same today as it did after it was initially created. Glaciers, lakes and rivers have scoured, eroded and deposited sediment to create the valley we know today as the Kootenai Valley.

Below are many of the favorite hikes and scrambles in the American Selkirks.

One thing you will notice while exploring the Selkirks, is the quality of the granite. There are few places in our region that you can walk up a 45°+ slope and not be nervous. But because of the events described above, we can enjoy the Selkirk Granite on these hikes.

When you see “ Peak 6514’” or other numbers, it means the peak is not named, and is designated by it’s elevation number.

To show the map legend click on the right arrow below. Click on the box to the right to expand the map to a full page.