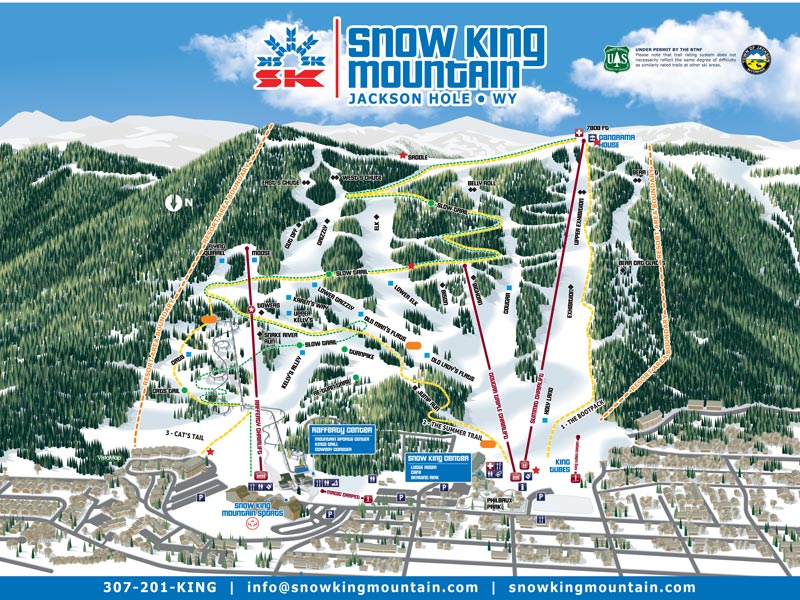 Snow King is a smaller family ski area, located just steps from downtown Jackson. Know locally as the "Town Hill," the area offers five lifts servicing 400 acres of skiable terrain. You will find a vertical of over 1,500 feet, with several steep runs near the top and some nice cruisers toward the bottom.

1936
The Civilian Conservation Corps (CCC) constructs a horse and hiking trail to the top of Snow King for the Forest Service, making the first of many physical changes to the hill to facilitate recreational use. The CCC trail became the first “official” ski run on the mountain.

1939
Neil Rafferty competes for and wins a contract with the Jackson Hole Club, an early chamber of commerce, to build an “uphill” facility on Snow King. The cable, bought used from an oil drilling company in Casper, Wyoming, ran through a narrow cut in the forest up the west side of the ski area. It was powered by an old Ford tractor. In exchange for building the cable tow, Rafferty receives a lease on the town land and secures a permit from the Forest Service to run the lift.

1939
The cable, used to power the uphill tow, was bought used from an oil drilling company in Casper, Wyoming. The work crew ran the cable through a narrow cut in the forest up the west side of the ski area, all powered by an old Ford tractor.

1946
The Jackson Hole Winter Sports Association is formed. The association raises $40,000 from local investors, buys an old tramway from a gold mining operation near Salida, Colorado and hires a Denver contractor to construct a lift from it. In its first full year of operation more than 8,500 people ride the lift to the top of the mountain.

1958
The Winter Sports Association begins working to upgrade the single chairlift to a double chair. The old cable is replaced with an 8,800-pound track cable and a new break-over tower is constructed for unloading the double chairs.

1981
A new Summit Lift is constructed.

1994
The Cougar triple chairlift opens with capacity for 1,200 riders per hour.

2015
The 35-year old Rafferty lift is replaced with a Doppelmayr fixed-grip quad. The Cowboy Coaster opens to the public, the Treetop Adventure and two new base lodges are built.

Summer 2016
A new miniature golf course is constructed at the base of the mountain for summer fun.


2017
A new Magic Carpet surface lift and additional lighting are added to enhance the Snow Tubing park in addition to a Giant Maze to get lost at the King.