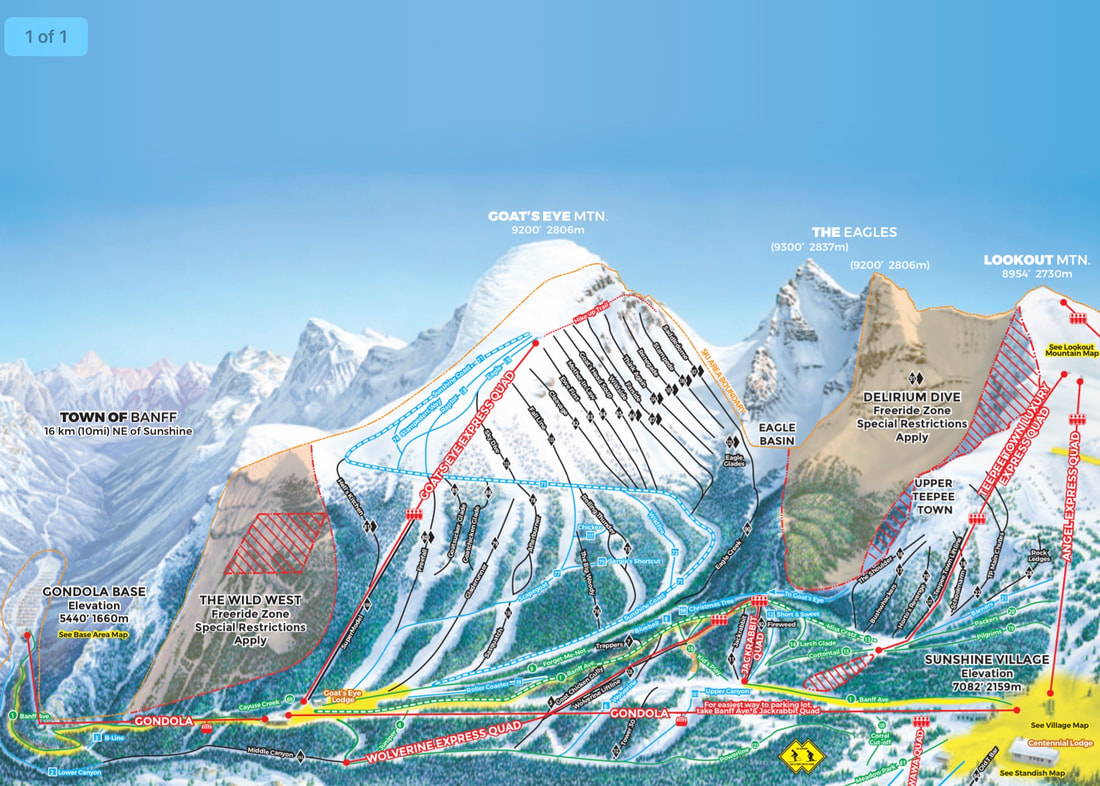 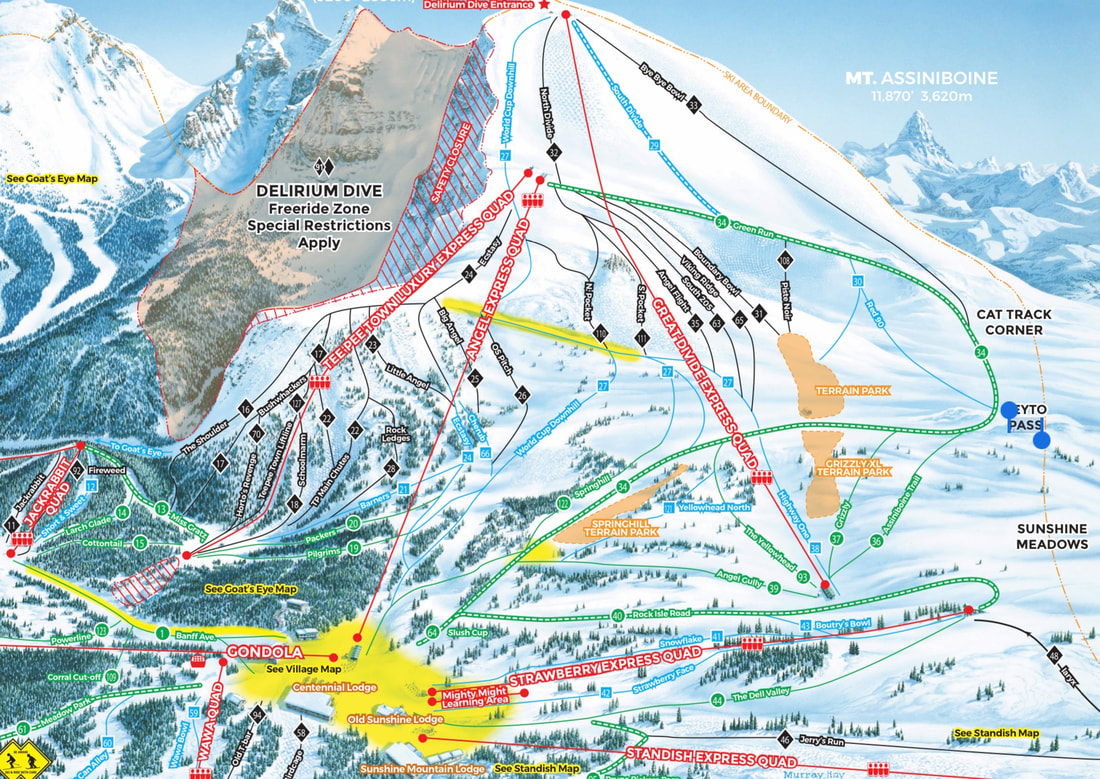 When you go to Sunshine, pay attention to the skiable terrain below the gondola. if there is enough snow, and the visibility is good, don't  miss this run.

Banff was first settled in the early 1880's, during the construction of the Trans Canada Railway. At the time, the Government of Canada was eager to build a railroad that would connect Vancouver to Montreal. What is now Banff National Park was first discovered in 1883, when three Canadian Pacific Rail workers stumbled across three natural hot springs on the side of Sulphur Mountain. In 1885, the Government of Canada, noting the rare beauty of Banff, established Banff as Canada's first national park. In Banff's early days, the Government of Canada promoted Banff, and its hot springs, as a must-see travel destination. Originally, Banff National Park was a 26 km2 federal reserve. In 1887, the reserve area was increased to 673 km2 (260 sq mi) and named "Rocky Mountain Park". This was the beginning of Canada's national park system.
How did Banff get its name? The name "Banff" orginiated during the construction of the CP railway. In 1884, the president of the Canadian Pacific Railway, George Stephen, declared the area Banff after his hometown of Banff, Scotland. Banff's famous castle, The Fairmont Banff Springs, was built in the late 1880's. The hotel was to be the flagship property of Canada's great hotels. The majesty of the mountains, the grandeur of the Banff Springs, and wild of Canada drew travellers to the area from across North America and the world and continues to do so today.

Banff's star as Canada's premiere tourist destination has been a part of our town since the early days. Canada's first Prime Minister, John. A. MacDonald, was quoted saying "I do not suppose, in any part of the world there can be found a spot, taken all together, which combines so many attractions…" when referring to Banff. Artifacts and indications of Banff's early days as a railway town can be found throughout the town of Banff, Sunshine Village and Banff National Park.
If you stop in Banff, you'll notice a funny shaped mountain in the middle of town that's quite small in comparison to the the other mountains. This mountain has a name that doesn't quite fit with those around it - Tunnel Mountain. Tunnel Mountain got its name because a railway tunnel was supposed to go through the mountain. The engineers had the tunnel completely designed, when a land surveyor discovered another pass that didn't require any expensive bombing.
At Banff Sunshine, our Old Sunshine Mountain Lodge (now the house of Mad Trapper's) was first built by the CP Railway and was used by employees surveying the land, long before we welcomed our first guests.
Over the years, Banff and Sunshine have welcomed celebrated guests from around the world. Notable guests include Marilyn Monroe, Clark Gable, Burt Reynolds, Wayne Gretzky, The Queen of England, Bill Gates, Alec Baldwin, John F. Kennedy, and countless more. As Marilyn Monroe said, "Banff is a place, where no beauty can compete with the beautiful scenery that is the Canadian Rockies."

The town of Banff is a vibrant destination to explore! Wintertime in Banff offers the opportunity for epic skiing and snowboarding in the great Canadian Rockies. In addition to some of Canada's best ski terrain, Banff is home to many other fun winter activities including dog-sledding, tobogganing, ice-skating, snowshoeing and much more. Banff boasts more than 130 pubs, bars, restaurants, coffee shops and bakeries to satisfy every palate, and its nightlife rocks 'til the wee hours of the morning. With more than 50 options for accommodation, you're sure to find something to fit any style and budget.

Banff Sunshine Village's unique location will make you feel miles away from civilization, even though you're only a 15-minute drive from the town of Banff. We are located 7,200 feet high on the Continental Divide, in the heart of the Canadian Rockies. Our three mountains offer vast terrain, and will wow you with 360 degrees of uninterrupted mountain views. Banff Sunshine provides terrain suitable for skiers and snowboarders of all ability levels. You can even ski two provinces (Alberta and British Columbia) in one run! Skiers and snowboarders love Sunshine for our snow and our extra long winter. Our seven month ski season stretches from early November until late May, making us the longest non-glacial ski season in Canada. On an average snow year, Banff Sunshine will receive up to nine metres (30 feet) of snow in a season.

Our diverse terrain features runs for skiers of all abilities, and our epic terrain is only made better by our SNOW. We're lucky to be home to Canada's BEST snow. Banff Sunshine Village offers skiers and snowboarders more than 3,300 acres of skiable terrain, ranging from gentle, inviting beginner runs all the way up to the most extreme big mountain runs. Delirium Dive has been named one of the top ten off-piste destinations in the world. The resort also features the massive 12-acre Great Divide Terrain Park, which includes more than 50 features when fully operational.

​Banff Sunshine Village boasts the most modern and efficient lift system in Canada including Canada's only heated chairlift, Teepee Town LX. Our modern fleet of lifts will have you spending less time on a chair and more time on the slopes. Our 12 lifts were built to cover as much terrain as possible. Banff Sunshine Village's lift fleet includes: One eight-person gondola, seven high speed quads, two fixed grip quads, and two beginner zones with moving sidewalk conveyor lifts. One of which is reserved for our tiny tiger (kids 5 and under) learning area.

At Banff Sunshine Village, great snow is a given. Our unique location high on the Continental Divide makes us a natural magnet for snow. As storms move across the Rockies from the Pacific, every last drop of moisture gets squeezed out over the mountains. At Sunshine, we don't make snow, we farm what mother nature gives us. And she gives us pure, WHITE GOLD. Our snow is light, dry, soft, and silky. It will make you feel like a hero as you cruise our 3,300 acres of skiable terrain.