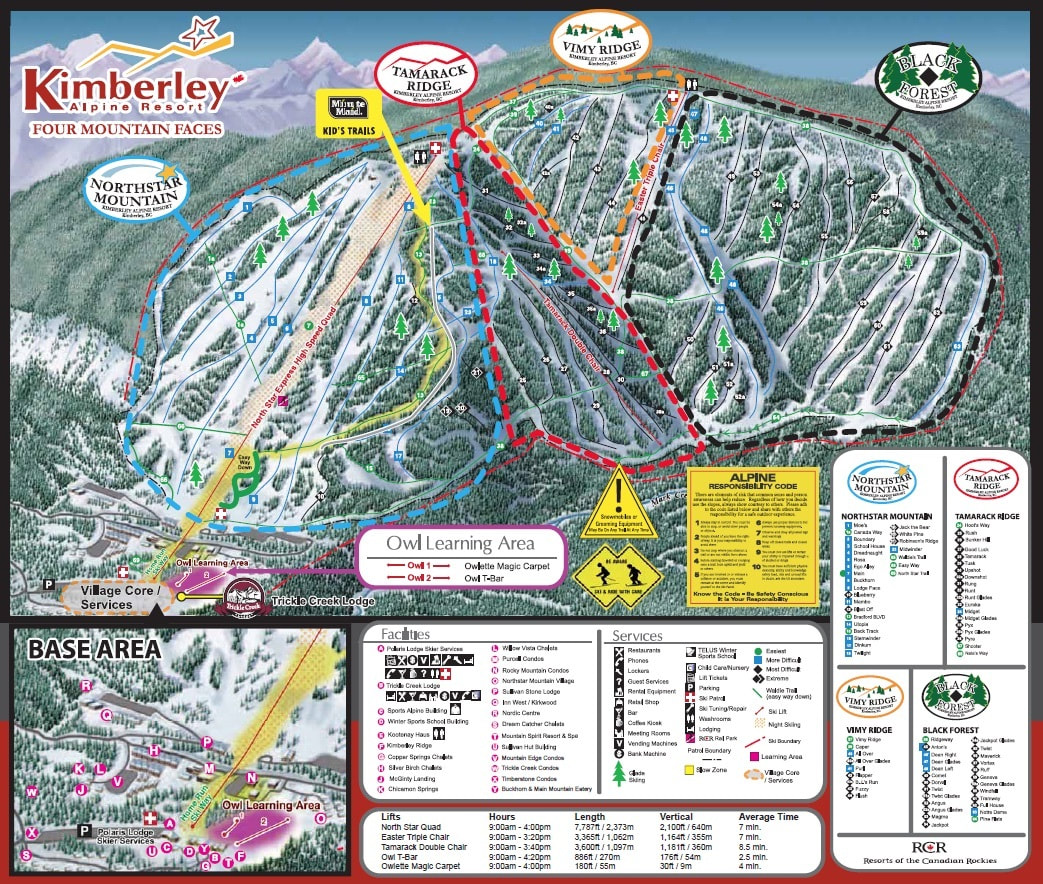 Are you looking for a place to get away from the traffic, away from the full calendars and away from all things marked 'urgent'?  Look no further than Kimberley Alpine Resort in Kimberley, B.C. where a laid back, genuine Canadian ski town and resort awaits you.
Perfect Purcell powder and an abundance of sunny days come together to make Kimberley Alpine Resort the top pick for your next ski vacation! With a huge variety of ski in/ski out accommodations and family activities (including the family skating rink, night skiing, events and kids après activities) as well as race event nights and live music in the Stemwinder for the parents.
Kimberley truly is the all-around winter playground you have been searching for.

FROM MINES TO A SKI HILLIt’s too bad the North Star guys didn’t keep prospecting. The motherlode was found across the valley by another group who opened the Sullivan Mine in 1892.
As people moved to the valley, the new town needed a name. In 1896, they decided to call it Kimberley after the impressive diamond mine in South Africa. By 1905, the North Star Mine was quiet but in hindsight that’s a good thing. The mine was directly under the slopes of Kimberley Alpine Resort.
Sullivan Mine however continued to extract ore for many years. The mine was the longest running underground mine in British Columbia, operating for more than 100 years and only shutting down in 2001. During that time, more than 65,000 people in the valley worked for the mine with tunnels snaking and criss-crossing about 500 kilometres under the slopes.
With the North Star Mine shut down, the slopes were perfect for a ski hill and opened in 1930 to the delight of many of the miners and their families. At that time, it was just a community hill with only a few amenities. Located just three kilometres from the centre of town, it was accessible by everyone with skis or toboggans.
Knowing that the mining industry would either run out of ore or demand for the product would fall off, Kimberley went about reinventing itself as a tourist destination in 1972. Jim Ogilvie, the mayor at the time thought there should be a gimmick to draw in the tourists.
BAVARIAN-THEMED TOWN IS BORNBecoming the “Bavarian City of the Rockies,” enticed visitors away from the major highways to see this unique tourist attraction. Downtown Kimberley was transformed into a pedestrian-only street called the Platzl full of shops and restaurants with that European façade. The largest freestanding cuckoo clock in Canada was the centre of attention. That theme hung on for many years but much of it has been renovated.
It did the job. It put Kimberley on the roadside attraction map. The amusing clock is still on the Platzl and waits for coins to open the doors to let a comical yodeller out for a holler.
Part of the reinvention plan was to bring in the skiers in the winter. In 1979, the city secured 165 acres of land at the ski resort, allowing the ski society to expand and build the first two condos on the mountain. The next winter Kimberley hosted the Canada Winter Games, a pretty impressive accomplishment considering the population of the city is roughly 8,000.
Everyone knows, beer comes along with a good Bavarian reputation.
Photo by The Resorts of the Canadian Rockies
All levels of government came together in 1980 offering money to improve the infrastructure of the resort. A new road named after local skiing ace, Gerry Sorensen worked its way to the base of the resort where the North Star Centre was added to the day lodge. A lodge was also added to the top of the mountain.
Anybody who had a mortgage in the late 1980s knows it was a tough time to have debt. Interest rates rose to 25 per cent and the Kimberley Ski Resort Society was forced into bankruptcy. The city purchased the mortgage from the bank and took ownership of the hill, saving at least 100 local jobs. Within the decade, an offer to purchase the resort came from the Resorts of the Canadian Rockies. Along with the Trickle Creek Golf Course and the campground, the resort was sold to RCR which had ambitious plans to create a mountain resort with hotels and lodges. Having the Canadian Rockies International Airport only 15 minutes away instantly made Kimberley Alpine resort the closest ski resort to an international airport.
Did you know, Kimberley is the closest ski resort to an international airport?
Photo by The Resorts of the Canadian Rockies
DEVELOPMENT BOOMEDThe base of the resort filled in with chalets, lodges and homes while the Gerry Sorensen Way attracted development on the shoulder above the base. Many skiers don’t even notice the only accessible tunnel on the mountain as they tuck towards the North Star Express Chair. It’s not a mining tunnel, rather an access for cars and pedestrians linking to the accommodations on the north side of the slope. Eight golf courses and endless mountain trails keep people coming all year.
Enjoy the apres ski in Kimberley.
Photo by Kimberley Alpine Resort
Today, skiers and boarders have five lifts to choose from to take them to 1,800 acres of terrain. On average, the resort gets five metres of “Purcell Powder” on more than 80 runs that include a nice mix of groomers, glades and slopes for beginners or experts. Après ski sees families comparing their days while gobbling baskets of fries at the Stemwinder Bar & Grill. Live music carries into the night.
Dive into the iconic Purcell Powder
Photo by Kimberley Alpine Resort
From humble beginnings with lead zinc this ex-mining town, has turned into an award-winning ski town.
For more information, head to the official Kimberley Alpine Resort website
Become a SnowSeekers member build your bucket list, and get exclusive access to deals and more.
Whoa! Learn about Kicking Horse Mountain Resort's awesome history of snow!
Show your stoke for the awesome history of Kimberley by sharing this page with your friends!
For the latest deals, snow reports and contests, sign up today to our SnowSeekers e-newsletter.