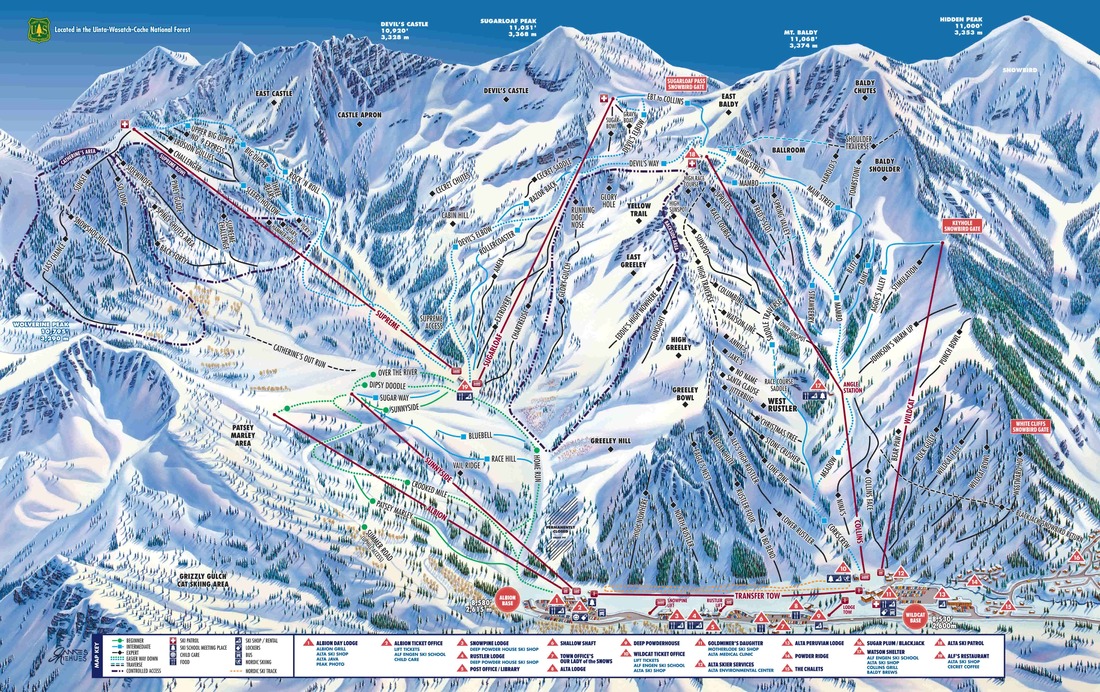 Claim to Fame: Where powder skiing techniques were pioneered and perfected
Unique Character: Alta installed the second chairlift in the western United States, shortly after Sun Valley Resort in Idaho. A ‘skier’s mountain,’ Alta Ski Area is one of only three ski areas that does not permit snowboarders in the US, alongside Mad River Glen and Deer Valley Resort.

Terrain Info
With iconic zones like the Devil’s Castle, The Ballroom, Catherine’s Area, Baldy Chutes and the High T (High Traverse), Alta is flush with glittering slopes and perfectly pitched fall-lines for powder skiing. In fact, many effective powder skiing techniques were developed by skiing pioneers right here at Alta. The craggy granite terrain, the steep shots and its location at the top of Little Cottonwood Canyon position Alta to consistently receive some of the deepest snow totals in Utah. A prime microclimate churns out a huge volume of low-moisture snowfall each winter.
What’s in a Name: Alta
Established in the autumn of 1871, the residents of the town of Alta eked out an existence at the top of Little Cottonwood Canyon along the widest and flattest part of the area’s topography. Alta was located just 850 yards east of Central City, another tiny mining boom town with a population just over 200 residents. The two towns soon merged and the name Central City was abandoned. The word Alta is Spanish for “upper” or “higher,” though the origin of the town’s name is lost to history. By 1872 there were over 180 structures and miners flocked to the area, hoping to strike it rich on a silver vein.
Though Brighton had a few rag-tag tow ropes prior to Alta’s creation, Alta Ski Area was the first resort in Utah to install a chairlift. The tradition, history and character of the resort can be discerned the moment you step atop its hallowed slopes. Alta has been spinning lifts for more than eight decades and is considered by many as the Holy Grail of powder skiing.

The Silver Ages
Central City was the first permanent settlement in Little Cottonwood Canyon, haphazardly coalescing after silver was discovered in the Wasatch in 1864 and claims were established in 1865. This small outpost included a sawmill, boarding houses and businesses to support the dogged efforts of the silver miners. The population of Alta, having eventually absorbed Central City, continued to climb into the thousands with dreamers seeking to strike it rich. The town was eventually platted and recorded in 1873 with 30 rectangular blocks containing 25 lots each, measuring 75 by 25 feet.
The harsh climate and remote location troubled the town of Alta and it cycled through boom and bust periods related to natural disasters and declines in the value of silver ore. A fire engulfed the town in 1878 and a cataclysmic avalanche ripped through the town in 1885, destroying structures and claiming unsuspecting lives. In tandem with a decline in mining activity, the town fell mostly dormant through the late 1800s before another minor but short-lived boom in the early 1900s at the Columbus Mine. Alta slowly emptied out and following the dawn of the Great Depression in 1927, only a handful of grizzled prospectors continued to exploit silver claims in Little Cottonwood Canyon. By 1930, the ghosts of prospectors past haunted the area and Alta claimed just six registered voters.

The Founding of Alta Ski Area
While Alta continued to languish as a ghost town, the United States Forest Service (USFS) employed the help of a famous Norwegian ski jumper, Alf Engen, to explore the area in 1935. His enviable task was to assess the area’s potential as a recreation hub for skiing and winter sports. The Forest Service was interested in creating new jobs and revegetating the barren slopes, stripped nearly bald of trees after decades of mining and exploitation. Impressed with the topography, Engen recommended the purchase of the surrounding land to create a ski area. A road was constructed to Alta the following year using the old railroad grade.
One lonely resident, the eccentric George Watson, declared himself mayor after purchasing a handful of old mining claims that eventually proved devoid of silver. To square up his back-taxes in 1937, Watson worked out a deal with Salt Lake County and deeded 700 acres to the USFS to own and manage. Meanwhile, William O’Connor, the owner of Wasatch Mines contributed another 900 acres, which permitted the USFS to move forward and approve Alta as a designated area for winter sports.

With the blessing of USFS to oversee development, a well-known lawyer from Salt Lake City, Joe Quinney, along with a handful of local businessmen, created the Utah Winter Sports Association, which later became the Alta Ski Lifts Company. Inspired by the business model of Sun Valley, Idaho, the savvy crew raised $10,000 to fund the project. Land was leased from USFS and construction of the new chairlift began the following summer. A surplus aerial tramway for transporting silver ore was repurposed to construct a single-seat chairlift, making Alta the second resort with a chairlift in the Western United States. Alta first welcomed skiers on January 15, 1939.

The Boom Years
Alf and his brother Sverre Engen were recruited in 1940 to run the ski school and teach the masses of Salt Lake the unknown and thrilling art of skiing. Meanwhile, Alta often served as training grounds for the mountaineers and ski troopers of the 10th Mountain Regiment during World War II. The postwar period saw another boom in the old silver town, but this time it was the reverberation of the birth of avalanche mitigation in North America.
As the resort steadily added two more ski lifts, two new lodges and several rope tows, it became clear that the deadly avalanches that plagued the steep slopes and the canyon road to Alta would need to be better managed. Sverre Engen was hired on as a Snow Ranger in 1940 and continued to perfect ski cutting techniques while experimenting with explosives. After the war, Monty Atwatersucceeded Sverre, having been discharged from the 10th Mountain Division due to injury. Monty experimented with hand charges, triggering avalanches after each storm and made careful observations and left a detailed record of his studies in snow science. By regularly causing avalanches to release following big storms, Monty aimed to avoid the large and catastrophic avalanches that had plagued Alta in the early days. Monty eventually pioneered the use of military-grade artillery into his avalanche mitigation program, but that's an exciting tale worthy of your full attention.

For a more in-depth look at the history of avalanche mitigation at Alta and the heroes like Sverre and Monty that regularly put their lives on the line to make it happen, check out my article here!

Alta went through another expansion in 1960 to satisfy the swelling demand for skiing and its growing reputation for spectacular powder snow. Interestingly enough, Snowbird got its start in the 70’s, thanks to an Alta skier named Ted Johnson, but that’s a story for another day…

Alta Today
In the 2001–02 season, Alta and Snowbird formed a partnership, connecting the two resorts via Peek-A-Boo Pass and Snowbird’s Baldy Express chairlift. Skiers now had 4,700 acres of world-class powder terrain to explore and enjoy. Following the new partnership, Alta-Snowbird was honored as the top ski destination in North America five years in a row by Skiing Magazine.
True to Alta’s old school roots, the first detachable and high speed lift was not installed until the turn of the millennium in 1999. Since then, Alta has upgraded a number of their aging lift infrastructure to high-speed quads. Most recently, the Cecret and Supreme double and triple chairs were replaced by one high-speed, detachable quad. The two chairs were replaced with a sophisticated Leitner-Poma lift that diverts 8.1 degrees, avoiding sensitive wetlands and rerouting the old Supreme chair's original lift line. With one giant tower and 92 sheaves, this engineering feat vastly improved this area of the resort while avoiding habitat destruction and ground disturbance by reusing the existing lift lines.
Today, the USFS continues to own the land used by Alta, which the company leases to operate each winter. Alta Ski Lift Company owns all the lift infrastructure, a number of lodging and administrative buildings for employees, three restaurants and the Alf Engen Ski School. The five beloved lodges at the base are all owned by individual families.