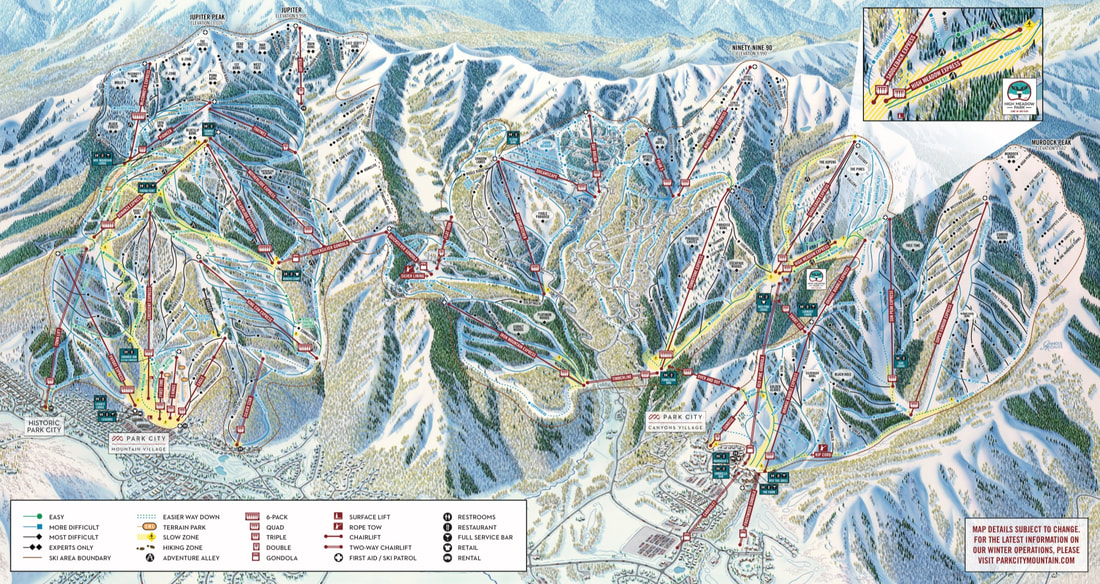 MINING HISTORYTHE PAST, THE PRESENT, AND THE POWDER OF PARK CITY, UTAHPark City was incorporated as a city in 1884. The mountains' abundant silver veins attracted adventurers from around the world in the late 1860s. During Park City's mining height, the surrounding mountains yielded $400 million in silver and created 23 millionaires—including the father of newspaper publisher William Randolph Hearst.

However, with falling mineral prices in the 1930s, the boom years ended and residents began "mining" a new treasure on the mountain, discovering what would later be coined The Greatest Snow on Earth.
Through the years, the mountain adopted many names from Treasure Mountain to Park City Ski Area, from Park City Mountain Resort to Park City Mountain. Today, Park City is a unique blend of the old and new, constantly evolving with a nod to the past and a vision for the future.
64 of Park City's buildings are listed on the National Register of Historic Places, many of which are located along the town's Main Street, and more than 1,200 miles of tunnels wind through the surrounding mountains as remnants of the mining era.

Claim to Fame: Once a silver mining boom and bust town, the miners turned away from the silver ore underneath the ground to the white powder coating the mountains each winter. They realized that nature’s bounty was all they needed to attract visitors to the historic mining town of Park City, Utah. Nowadays, Park City Mountain is the largest lift-served ski resort in the United States with 7,300 acres of skiable terrain.


Unique Character: Park City Mountain is home to a rich lore of silver mining history. You can dive in and get a first-hand account by joining the Silver to Slopes Historic Mining Tour. This free, guided tour for intermediate skiers pairs guests with an expert guide and historian to discover and learn about all the historic mining buildings, relics and infrastructure that dot the ski slopes. For a glimpse inside the Silver to Slopes tour, listen to this podcast about local historian and tour guide, Sandy Melville.

Summer Hunting Grounds
Prior to European contact, Indigenous bands roamed the Intermountain West for centuries. In Northern Utah, the majority of these folks belonged to the Ute and Shoshone tribes. The area around Park City and Summit County today served as a gathering place and summer hunting grounds for Indigenous people. Summit County’s harsh winter climate only made it hospitable in the late spring or summer months. Evidence has been found of ancient Fremont hunting camps dating back to 5,000 years ago. Shoshone people began to settle in Northeastern Utah an estimated 700 years ago.
Settlers of European descent began exploring the area in the 1830s, and Mormon pioneers arrived in the area in 1847 after emigrating across the plains to escape persecution. The completion of the Transcontinental Railroad in 1870 brought miners to the area in droves, looking to strike rich. The town of Park City was incorporated in 1884, and the population boomed to over 5,000 people, most of whom had direct ties to the mining industry.


Silver Goes Bust
At the turn of the century, Park City was a well-established blue-collar mining town. It boasted the second largest silver strike in America and miners drifted in and out of town hoping to strike rich. The Great Depression strangled the profitability of many of the mines in the 1920s, and thousands departed the area as hopes for prosperity dimmed. The fortune of the town was directly tied to the volatile mineral industry, and people arrived in town or departed at the mercy of the price of ore.
Skiing caught the fancy of local denizens in the 1930s with the construction of a massive ski jump with the tailings of the Creole mine. At this time, skiing was primarily a spectator sport. However, interest in recreational skiing slowly began to pique, and the Park City Winter Carnival debuted in 1936. Enthusiasm continued to build, and in 1947 the Snow Park Ski Area transported its first skiers uphill. This would eventually become the site of today’s Deer Valley Resort, but that’s an entirely different chapter of the story that you can discover here.

By 1949 many of the mines in the Park City area had shuttered, and over 1,200 miners were out of work. By the 1950s the population of Park City had further shrunk. The prospects seemed bleak, and there was little work and few expectations for better times ahead. The 1950s were a tough decade to eke out a living in the rapidly shrinking town. One remaining mine company, the United Park City Mines, consolidated what had formerly been hundreds of individual mining companies into one entity.
A Change of Fate
As the prospects for the town of Park City dimmed, members of the United Park City Mines company gathered in secret, scraping together what was needed to apply for a government economic stimulus loan intended for depressed rural communities. The application languished for some time until a local, Jack Gallivan, mentioned the stalled loan during a lunch with President John F. Kennedy. Shortly thereafter, in 1962, a loan of 1.25 million was approved, and the fate of Park City would forever change.
Generously provided by the J. Willard Marriott Library, University of Utah Ski Archives Special Collection

The following winter, the miners added the Thaynes chairlift. It’s difficult to imagine now, but in those early years, it was accessible via a dark and foreboding tunnel in the Silver King Mine called the Skiers’ Subway. A mine train carried skiers through the dank and pitch-black Spiro Tunnel for 2.5 miles before reaching a cage-like hoist that carried them up 1,750 feet back to the surface of the earth. The elevator deposited them at the base of Thaynes Canyon, where they could access the new lift. It was an uncomfortable and arduous journey that proved unpopular with skiers, so the underground Skier's Subway was disbanded after just four years.


Stern Times
United Park City Mines ran Treasure Mountain for several years but sold it at a loss in 1971 to Edgar Stern, an Aspen real estate developer. The miners didn’t have any experience running a recreational enterprise, and they decided to offload the business for $5.5 million. That first summer three new lifts were constructed: Payday, Crescent, and Lost Prospector. Stern convinced his former friend and neighbor from Aspen, famed Norwegian skier Stein Eriksen, to settle in and help him promote skiing in the area.
The King Con Triple Chair was opened in 1973, and new runs were cut along the east side of King Con Ridge to serve as training slopes for athletes. Stern’s group worked hard to support the alpine ski racing community, and with Eriksen's help, convinced the US Ski Team to relocate their training facilities from Denver to Park City in 1974. This was a massive win for the little mountain and brought national recognition to the town.
Stern gradually gravitated toward more grandiose dreams and sold Park City Ski Area in 1975. He went on to establish Deer Valley Resort, a radical departure from contemporary ski areas with its luxurious amenities and well-appointed lodges. More on Deer Valley’s history can be found here.
Growing Up
Stern sold Park City Ski Area to a businessman from New York, Nick Badami, who also owned the Tahoe area Alpine Meadows resort. He’d been bored by retirement and was looking for something to do with his son Craig. The two worked tirelessly to transform the struggling resort into a profitable destination, upgrading lifts, expanding terrain and investing in snowmaking. Snowcats were purchased and a maintenance shop was built. Jupiter and the Ski Team chairs were added for the second season. New terrain was added with the Pioneer Chairlift in 1984, and the mountain was connected to Old Town Park City with the Town Lift in 1985.
Craig’s zest for skiing secured the first FIS World Cup races for the resort in 1985, which brought international attention to Park City. Craig was tragically killed in a helicopter crash at the resort following a 1989 World Cup event. His father, besieged with grief, began looking for buyers who would share their family's ultimate vision for the resort.

Improvements are still very much underway, and Vail has lavished much attention in transforming the Canyons Village into a vibrant and world-class mountain destination. The aim is to foster a more walkable village area with a sizable increase in lodging, hotel, commercial spaces and employee housing. Meanwhile, an updated plan for the base area located in the town of Park City is currently in the planning stages with city council. One thing is certain, Park City Mountain will continue to change and attract guests and outdoor lovers from all across the globe.