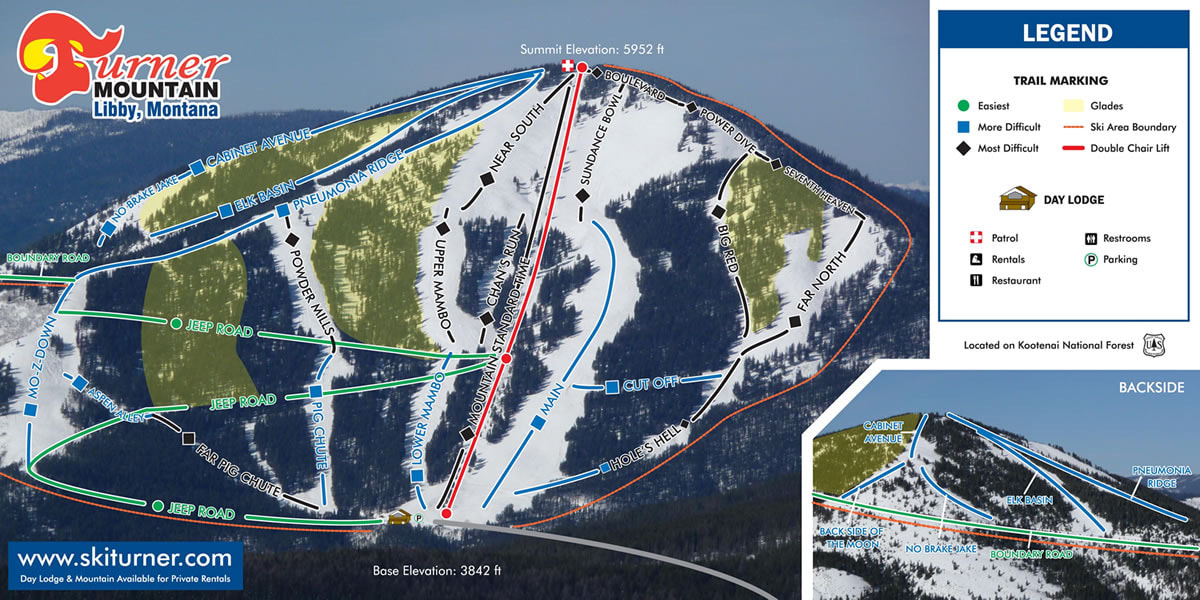 In the late 1950s, a dedicated group of skiers dreamed of a ski area in Libby.  That dream was realized in 1960 with the development of Turner Mountain Ski Area.  That fall, a rope tow and 20’x40’ warming shelter and snack bar  were constructed for use during that first season of operation.  Turner Mountain Ski Area has operated each winter since then, mostly run by volunteers.  The following summer of 1961 saw the construction of a mile long T-Bar to the summit of Turner Mountain.  The T-Bar was often referred to as:  “The longest T-Bar in North America”.  In the late 1990s another dedicated group of skiers envisioned replacing the T-Bar, which had been in operation nearly 40 years.  This vision was realized during the summer and fall of 2001 with the construction of a double chairlift to the summit.  The original warming shelter remained in service until 2005 at which time a 4000 sq ft. lodge was constructed.  Turner Mountain Ski Area continues to operate as the quintessential small town ski area, based on the same spirit of camaraderie, volunteerism, and desire for great alpine skiing on which it was started in the late ‘50s.

Jake and Jini Jeresek, ca. 1980s.Kootenai Winter Sports
Ski Education Foundation, Inc.
Turner Mountain Ski Area is an impressive operation that plays a vital role in our community.  Turner is manged by a volunteer-run non-profit 501(c)(3) organization called Kootenai Winter Sports Ski Education Foundation, Inc.  Turner draws visitors to the community during the winter months, which helps stimulate what is typically a quiet period for Libby's economy.  The mountain also provides recreation opportunities for locals and visitors alike at affordable prices.  The dedicated volunteers of Turner Mountain have accomplished incredible things through hard work, responsible management, and the support of locals and generous donations from people and organizations both in and out of the community.

As a volunteer-based non-profit organization, Turner Mountain relies on generous donations from people like you to assist in its efforts to keep the mountain running and continue to provide fantastic winter recreation opportunities in Northwest Montana.
The History of Turner Mountain Ski Area
All volunteer-run Turner Mountain ski area began in 1961 through the efforts of the Libby Ski Club, opening on New Year's weekend with a 1,200-foot rope tow. The ski area slowly grew, although has been run by volunteers for the past forty years. During the summer of 2001, volunteers installed a 120-chair lift to replace "The World's Longest T-Bar", and dreams to grow the ski area have been set into motion...
Pictures of installing the new lift
Turner History Photo Gallery Page 2

Installing the new ski lift on Turner Mountain during the summer of 2001. Photos by Steve LeFever.
(Click on pictures for larger view)
406-293-2468
www.skiturner.com
contact@skiturner.com
Return to main Turner ski page

As early as 1936, skiing enthusiasts in Libby formed the Kootenai Ski Club as an organized group to enjoy outdoor winter sports. Skiers used a slide on a sand hill on the north end of Libby and the ski run on Skidale Hill behind the middle school for their downhill fun. Later, the ski club became the Libby Ski Club and members wanted to have a better place with more dependable snow for skiing and plans were made to develop Turner Mountain into a ski area in the 1960s. Turner Ski Area opened in 1961 with a 1,200-foot rope tow that drug skiers up the maintain. By its second year of operation, Kootenai Winter Sports was formed and money was raised for the T-bar lift for the season of 1961-1962.
Today, Turner Ski Area is as popular as ever. Still volunteer run and operated, Kootenai Winter Sports has begun to implement their plans to upgrade the ski area. With a grant of $92,000 and a $128,000 loan guarantee from the Libby Area Development Company, the organization purchased a chair lift in 1999 from ski areas in Washington state. The old T-bar was taken down in June, 2001 and volunteers spent the summer preparing the mountain for the new 120-chair lift. Workers refurbished the lift, scraped and painted the 31 lift towers, and started the work on the mountain to install the towers.
By November, the tow line was strung and tested, and in December the chairs were added. The load tests were completed in late December, and in early January, 2002 the ski area opened for the season to throngs of enthusiastic skiers. Long-term improvements include a lodge, new warming house, new shop building, and electric generator. The new lodge, with indoor plumbing, will be constructed for the 2002-2003 season.
The ski area is still run mostly by volunteers, people who love the mountain. The ski area boasts an annual snowfall of 250" per year-snow heaven! The summit elevation is 5,952 feet with a vertical drop of 2,110 feet. There are a total of 20 runs, 70% of which are Black Diamond. The ski area's motto is, "Steep, Deep and Cheap", and lift tickets are a bargain at just $22/day for adults. Located just 22 miles from Libby, Turner Ski Area is a little home-town ski hill that has captured the hearts of those who take care of the mountain, and the skiers that return year after year to take in the incredible view and make one more trip down the challenging runs.