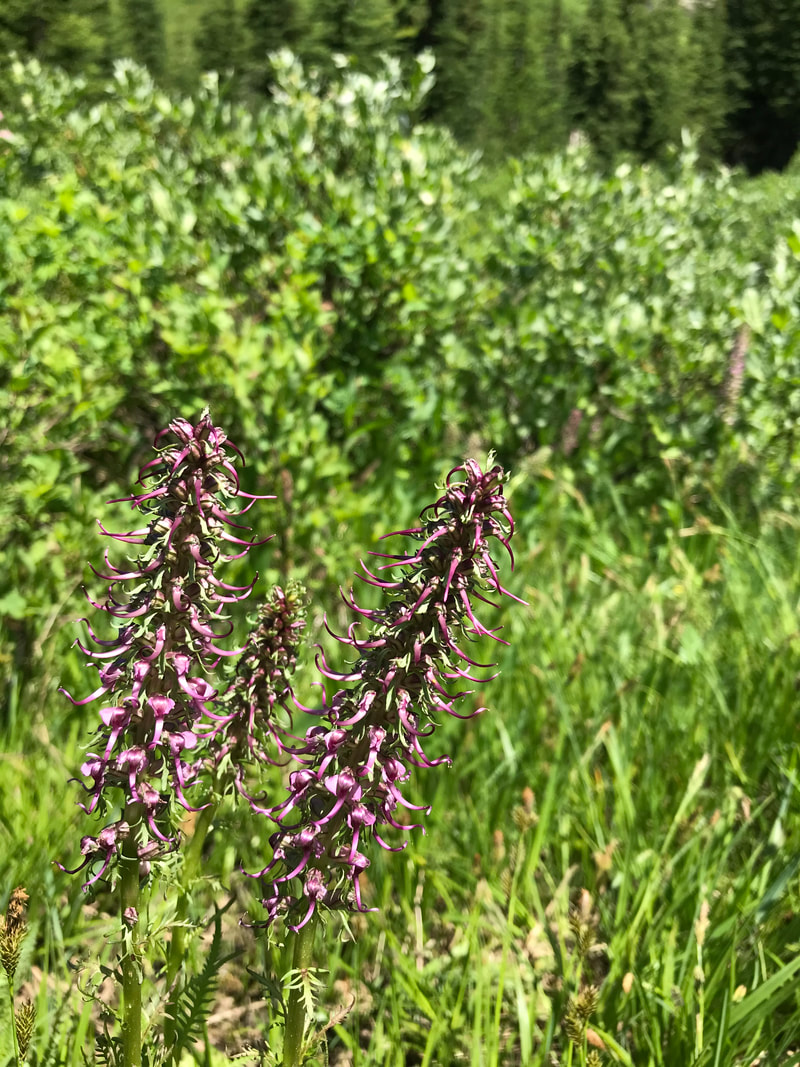 GENESIS NAME:  Pedicularis groenlandica
DISTRIBUTION:  AK, CA, CO, ID, MT, NM, OR, UT, WA, WY.  CANADA..AB, BC, ON, SK
SEASON:  Blooms June, July, August
MEDICAL USE:  This genus is recognized by modern herbalists as a mild sedative and muscle relaxant. Historically it was used to treat stomach ulcers, rheumatism, and urinary problems. Ojibwa Indians considered it an aphrodisiac.
POISONOUS:
EDIBILITY:  This deep red flower is large and can be 10–12" long on a 3–5' tall plant. The seeds are edible and can be popped, cooked like a grain or ground into flour. Not only are the seeds edible, but the young leaves are nutritious greens.
FEATURES:  Never has a common name been more appropriate than this one; the flowers really do resemble an elephant's head with a long trunk and droopy ears on either side of it. See this and you really are seeing pink elephants! Shortly after snow melt, purplish, fern-like leaves come up through the grasses and sedges on whose roots this plant is parasitic. A little later, spikes to 18 in. carry showy clusters of pink-purple flowers. The individual flowers resemble an elephant’s face - the upper petals twisted and curled into a long "snout." Dense racemes of flowers that are perfect little pink elephant heads (ears, trunk, and all) bloom on leafy stems.
The flower’s charming structure facilitates pollination while at the same time reducing the chances of hybridization with other species. Little Elephant Heads (P. attollens), only to 16" (40 cm) tall, has a corolla marked with white and rose, and head proportions are not so perfectly elephantine - the "trunk," raised as if trumpeting, is only as long as the lower lip. It grows from the Cascade Mountains of Oregon to the Sierra Nevada in California.
LEAVES:  The leaves of Pedicularis groenlandica are typical of louseworts. They look almost fernlike with long, narrow, pinately divided, sharp-toothed lobes.
FRUITS: NA

Pedicularis Groenlandica is one of several pedicularis species used as a muscle relaxer, anxiety remedy and an aphrodisiac. Nicknamed “Elephant Head”, this species has clusters of large purple blooms.  Pedicularis Groenlandica is a separate species from pedicularis grandiflora, which goes by the same common name. Pedicularis Groenlandica  grows in moist areas such as bogs and marshes. It is hemi-parasitic and feeds off the roots of a host plant. We are one of the few suppliers of these Pedicularis Groenlandica  seeds. We also offer other pedicularis seeds and dried herb, including wildcrafted pedicularis densiflora (Indian Warrior) flower buds.
Growing Information: Pedicularis Groenlandica is one of the more difficult seeds to germinate. Start by stratifying in a refrigerator. For seeds sown outdoors in the fall, the cold weather will naturally create this process. Mix seeds with moist sand, vermiculite, or peat moss. Silica sand is an excellent choice. For large quantities, use coarse grade vermiculite. Place your mixture in a plastic zipper bag or sealable container and store in a refrigerator (33°F). Some seeds may sprout in storage if moist stratified too long. These should be planted immediately. This species often requires a host plant because it is hemi-parasitic. Low-growing grasses and sedges are suitable choices. Examples include Sweet Grass or Buffalo Grass. They can either be planted along with the pedicularis or added after. To arrange a parasitic relationship, the seeds must be planted amongst the damaged roots of the host plant. This can be done by making an incision at the bottom of the host plant where pedicularis seeds will be planted. This can be accomplished by raking an area around the host plant as well. If the host plant has just been transplanted, this will also provide a desirable scenario for the pedicularis to attach.