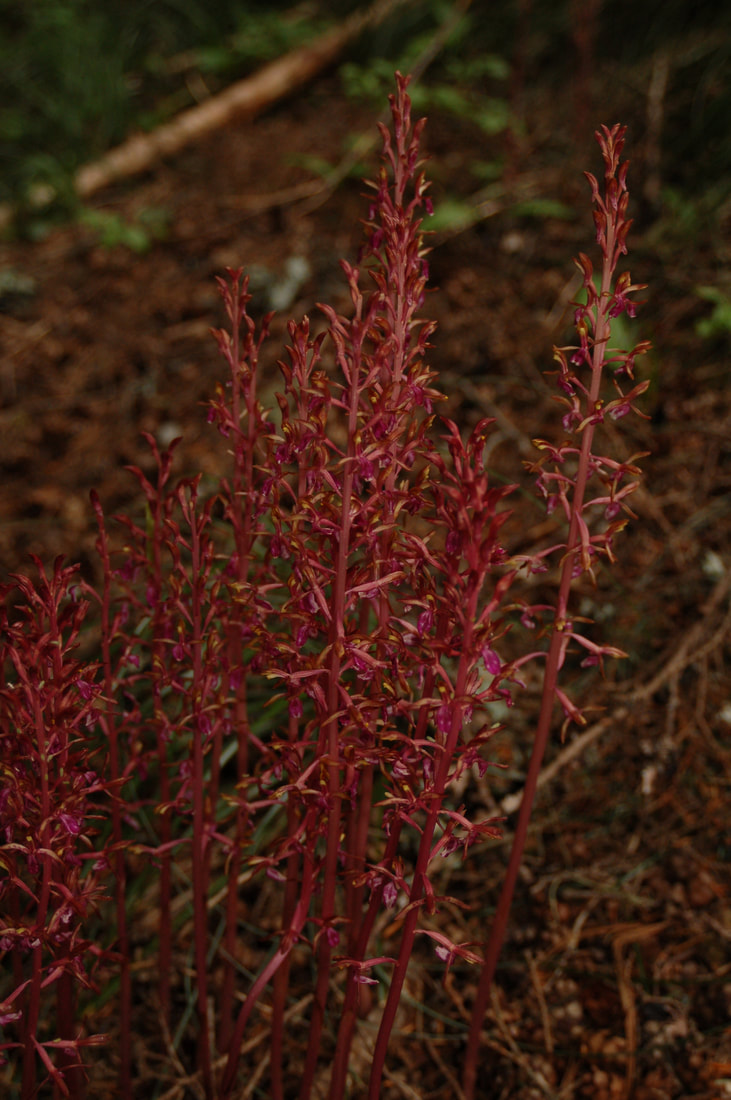 Merten's coralroot orchid is a herbaceous, perennial wildflower with a contiguous distribution in the northwestern United States north into British Columbia and adjacent Alberta and then into southeast Alaska, with several disjunct populations in Montana and Wyoming. Merten's coralroot orchid occurs occasionally as a single aboveground flowering scape or as an occurrence with numerous scapes.
Corallorhiza mertensiana (Corallorhiza: corallion, coral and rhiza – root; coralroot and mertensiana, for botanist Carl Franz Mertens) refers to the underground stems, rhizomes, appearing like an ocean coral.
Corallorhiza mertensiana attains a height of 30 to 65 centimeters. The lavender purple to reddish -purple scape emerges from a small coral-shaped rhizome. The leaves are reduced to sheaths surrounding a simple scape (stalk of the inflorescence), pale red to lavender purple to reddish-purple. Occasionally, there are individual flowering scapes or an entire population is creamy yellow because the anthocyanins (flavenoid pigments) which give this orchid its pale red to lavender purple to reddish-purple are absent. The inflorescence is a lax to dense raceme of few to numerous flowers. Flowers range from fully open and spreading to converging but not closed. The flowers are variously colored, usually reddish to purplish or lavender purple, with the petals commonly spotted with purple, the lip is generally white. The fruit is a capsule.
Corallorhiza mertensiana flowers from late spring to summer. The species occurs in a broad array of coniferous to deciduous habitats in humus rich soils.