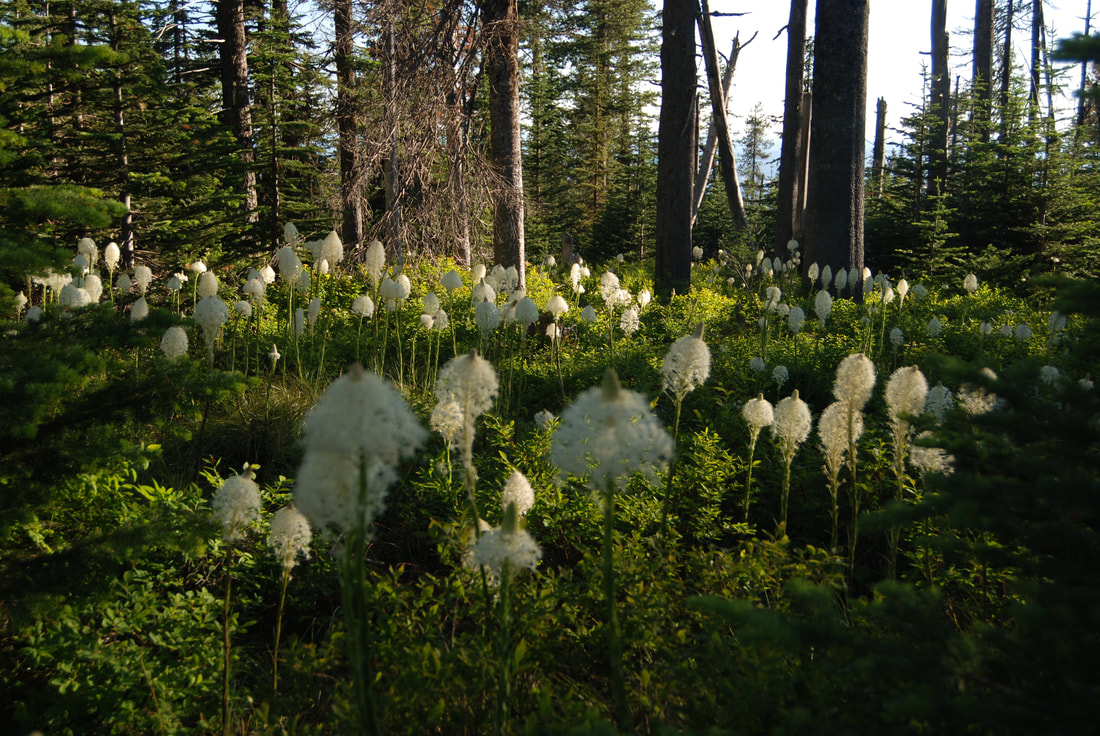 GENESIS NAME:  Xerophyllum tenax
DISTRIBUTION:  Washington, Idaho, Montana, Colorado, Oregon, California, British Columbia and Alberta
SEASON:  On average, your frost-free growing season starts May 22 and ends Oct 6, totaling 137 days.
MEDICAL USE: Native Americans have long used Bear-grass for a variety of purposes. Leaves were used for basket weaving, leaf fibers for clothing and the rhizomes roasted for food. Eastern prairie tribes boiled the roots for a hair tonic and the treatment for sprains. Elk and deer forage on the flower stalks.
​POISONOUS:  Xerophyllum tenax and other types of Bear Grass can be an important food source for deer, but many Lily-related species can be toxic to dogs and even more so to cats. This type of grass is too tough for dogs to digest, so it will make them vomit.
​EDIBILITY:  Beargrass (Xerophyllum tenax) rhizomes are thick and tuberous, and edible when roasted or boiled. found on dry slopes/ridges or forest clearings.
FEATURES:  Bear-grass is a stout perennial arising from a woody, tuber-like rhizome. Leaves are dull olive green and typically 2 to 8 decimeters (0.7 to 2.6 feet) long 2 to 4 millimeters (0.08 to 0.16 inches) wide, persistent, grass-like in appearance and rough to the touch.
LEAVES:
FRUITS: ​Oval 3-lobed capsules approximately a quarter of an inch (5 to 7 mm) in length are produced. Small seeds are contained within the capsules. Notable feature: This species derives its common name "beargrass" because bears eat its fleshy leaf bases in the spring.

sBear-grass is in the Liliaceae (lily family) which contains 478 species in North America and approximately 4,200 species worldwide distributed mostly in the tropics. It is a diverse plant family and includes numerous important ornamentals, a number of important agricultural crops and has been the source of valuable pharmacopoeia. Leaves of Bear-grass are collected from wild populations and sold to the floral industry for use in floral arrangements. Bear-grass is also sought for use as an ornamental in cultivated landscapes and gardens. Collection of Bear-grass from native habitats should occur only after proper permission and permits have been obtained from the appropriate agency or land owner. The collection of entire plants from wild populations is strongly discouraged. Plants for use in landscaping or gardens should be purchased from reputable native plant nurseries or propagated from seed purchased or collected from wild plants.
Bear-grass is a stout perennial arising from a woody, tuber-like rhizome. Leaves are dull olive green and typically 2 to 8 decimeters (0.7 to 2.6 feet) long 2 to 4 millimeters (0.08 to 0.16 inches) wide, persistent, grass-like in appearance and rough to the touch. Flower stems typically range from 1.2 to 1.8 meters (3.9 to 5.9 feet) high. The inflorescence is a raceme 5 to 7 decimeters (1.6 to 2.3 feet) long. Flowers are white or cream in color and slightly fragrant. Tepals are oblong to lanceolate 6 to 9 millimeters (0.2 to 0.4 inches) long and 2 to 3 millimeters (0.08 to 0.1 inches) wide. Plants flower in spring to early summer, depending on elevation and latitude and can form highly attractive displays in their natural habitats.
The species grows from near sea level to over 2,000 meters (6,600 feet) in open coniferous woods, dry ridges, rocky slopes and clearings. It ranges over a wide geographic area in western North America extending from British Columbia south to the Sierra Nevada and Coast Range of California and east from Alberta to northwest Wyoming. It is a common occurrence in the Olympics, Cascade, northern Sierra Nevada, and Rocky Mountains.
Native Americans have long used Bear-grass for a variety of purposes. Leaves were used for basket weaving, leaf fibers for clothing and the rhizomes roasted for food. Eastern prairie tribes boiled the roots for a hair tonic and the treatment for sprains. Elk and deer forage on the flower stalks. Grizzly bears have been known to use bear-grass leaves in winter dens during hibernation. Bear-grass is capable of surviving light and moderate fire and regrowth after fire and can serve an important role in soil erosion and site revegetation.
Several times throughout the Lewis and Clark journals, the writers refer to a plant they named beargrass. This common wildflower (Xerophyllum tenax) is actually not a grass, but a member of the family.

The plant is native to Montana, but can also be found in subalpine meadows and coastal mountains throughout the Pacific Northwest, extending from British Columbia to northern California and eastward to Alberta and northwestern Wyoming.

Beargrass can grow up to five feet in height with long and wiry, grass-like basal leaves at the base of the stalk and a cluster of small, dense white flowers at the top. While bears do not eat the plant, they will use leaves as denning material. Sheep, deer, elk, and goats are known to eat beargrass.
beargrass.
A common myth states that beargrass only blooms every seven years. In reality, the plant flowers whenever conditions are appropriate. A single plant may have numerous basal rosettes on a common root system. Each rosette will bloom only once. Factors for abundant plant blooming include ideal amounts of spring rainfall and moisture present in the soil. For this reason, back-to-back blooming is rare. Blooming can begin in late May in lower elevations and continue into August in the high country.

The plant was first called beargrass by members of the Lewis and Clark expedition. At that time "Bear grass" was a common name for yucca (commonly called soapweed today), which has a superficial resemblance to beargrass. Native peoples have used beargrass leaves for basket weaving, and roots were used to treat injuries. Other common names for this plant include basket grass, bear lily, pine lily, elk grass, squaw grass, and turkeybeard. 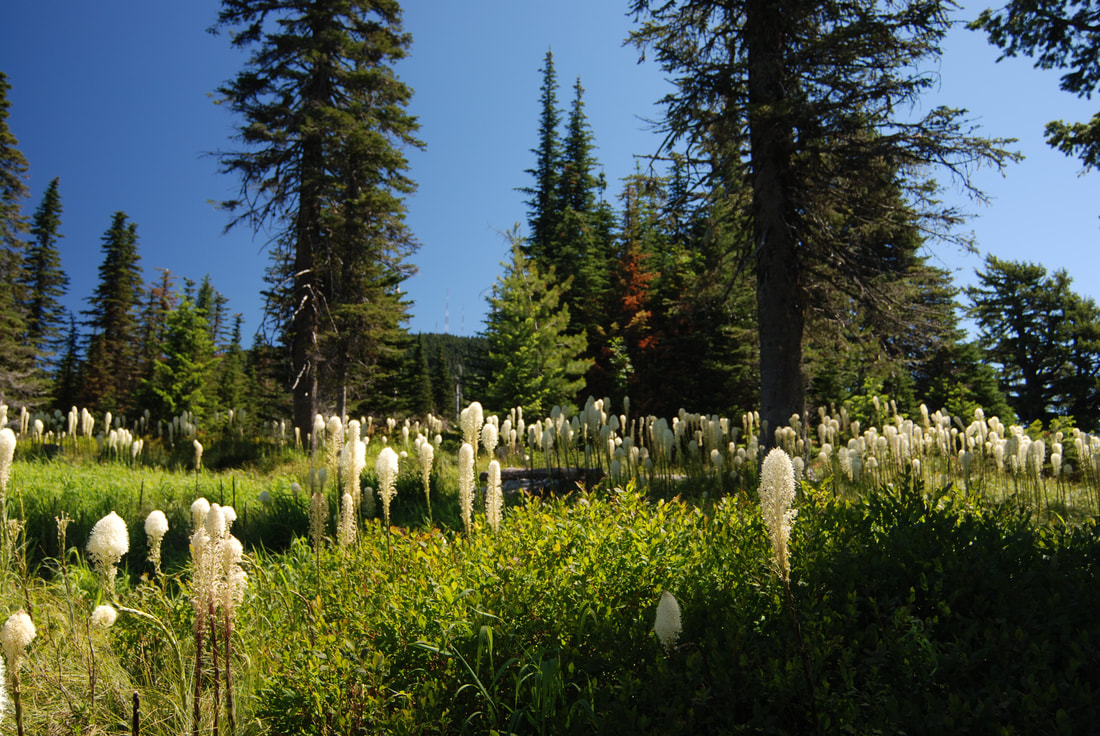 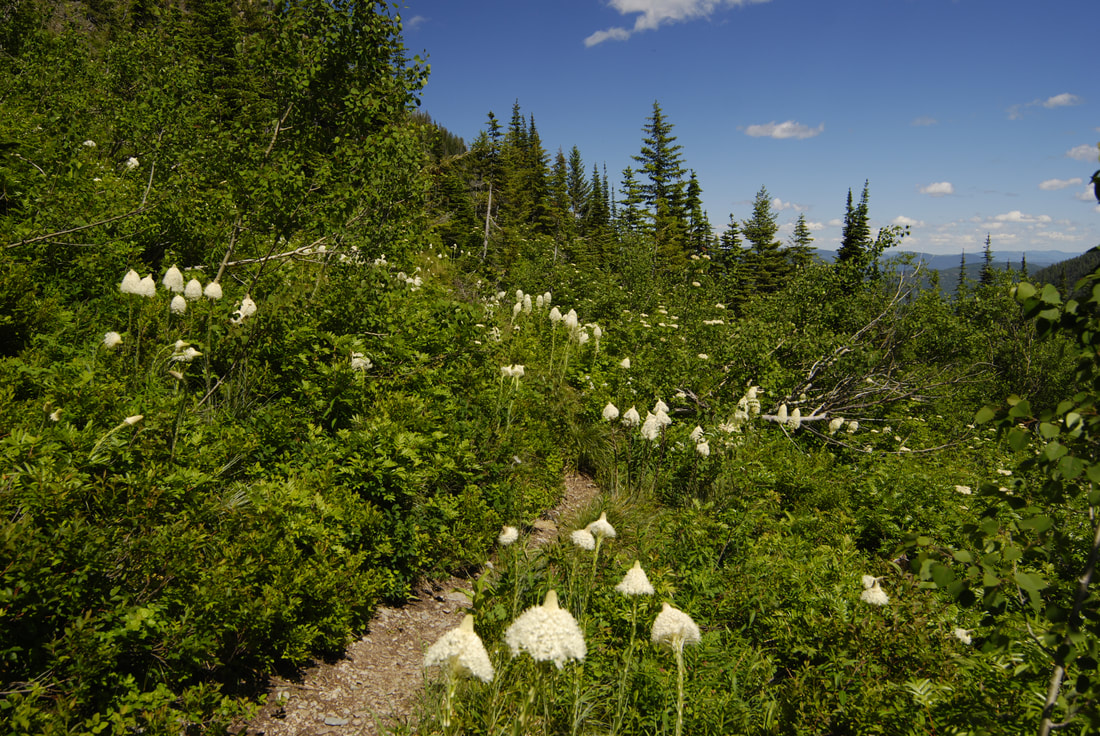 ALONG THE TRAIL TO CLIFF LAKE IN THE C.M.W. 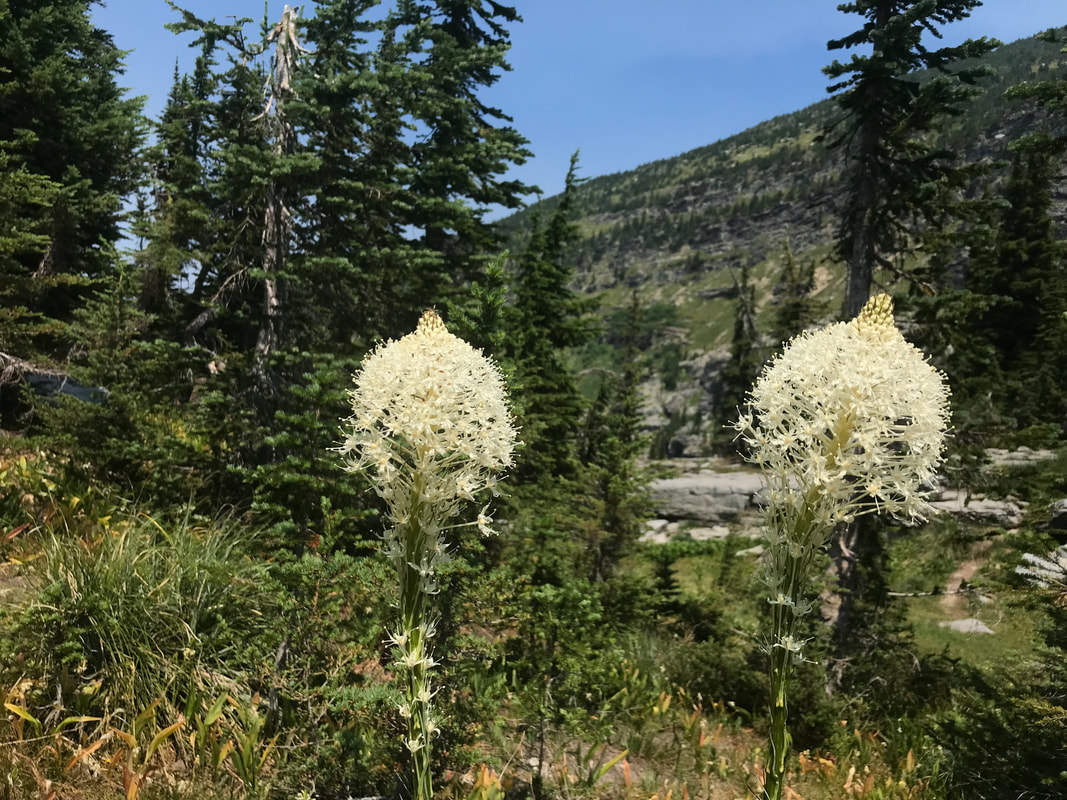 ALONG THE CLIFF LAKE TRAIL IN THE C.M.W. 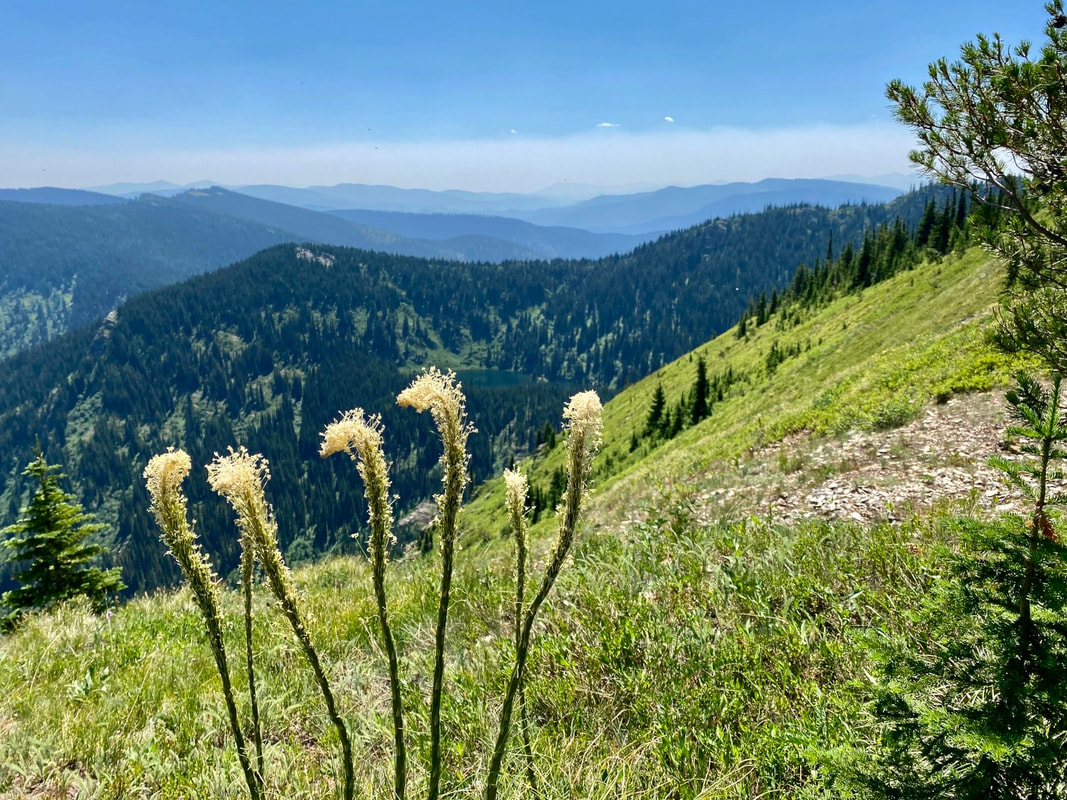 OLD BEAR GRASS ALONG THE STATE LINE TRAIL
THE LAKE BEHIND IS UPPER ST.REGIS LAKE 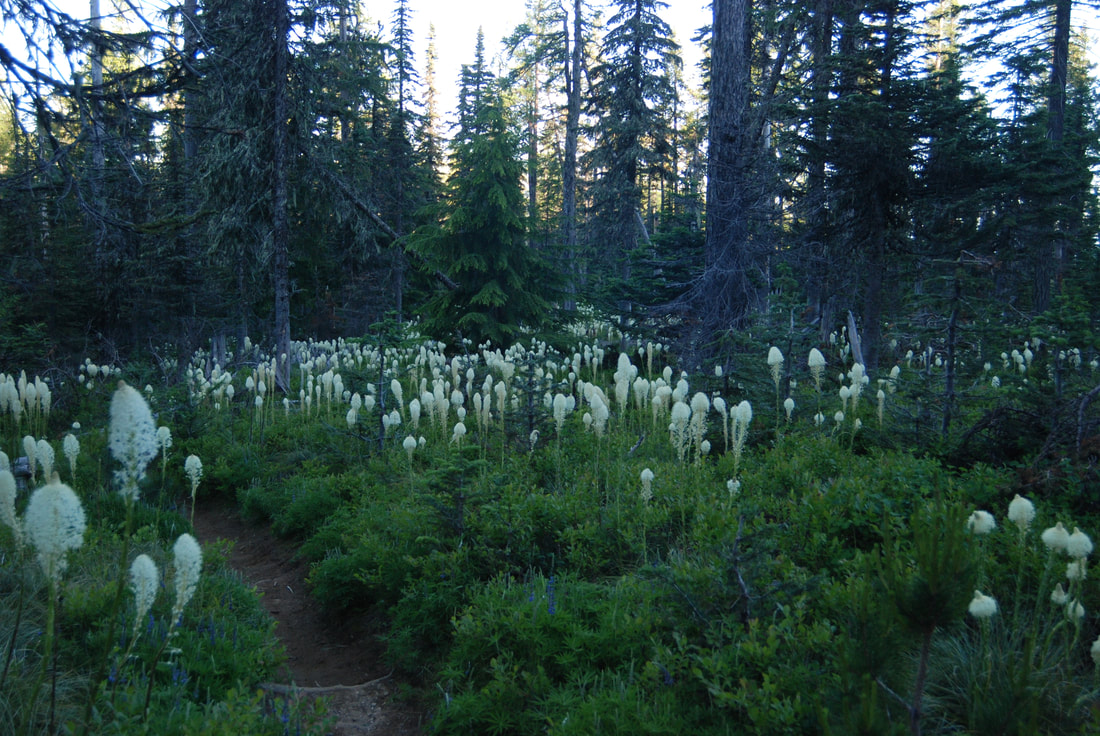 THE GREAT BLOOM ON MOUNT SPOKANE 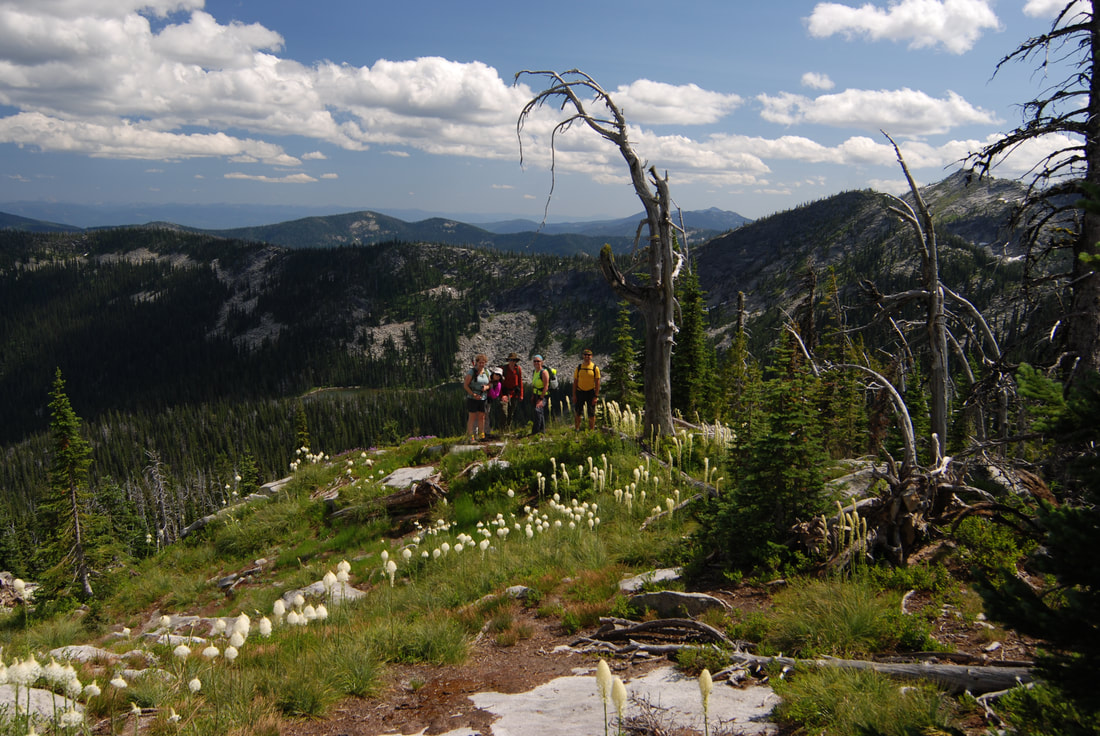 WHILE ON A SCRAMBLE OF PYRAMID PEAK IN THE AMERICAN SELKIRKS,
​I HAD THE TEAM POSE AMONG THE BEAR GRASS
​PYRAMID LAKE IS BEHIND THEM