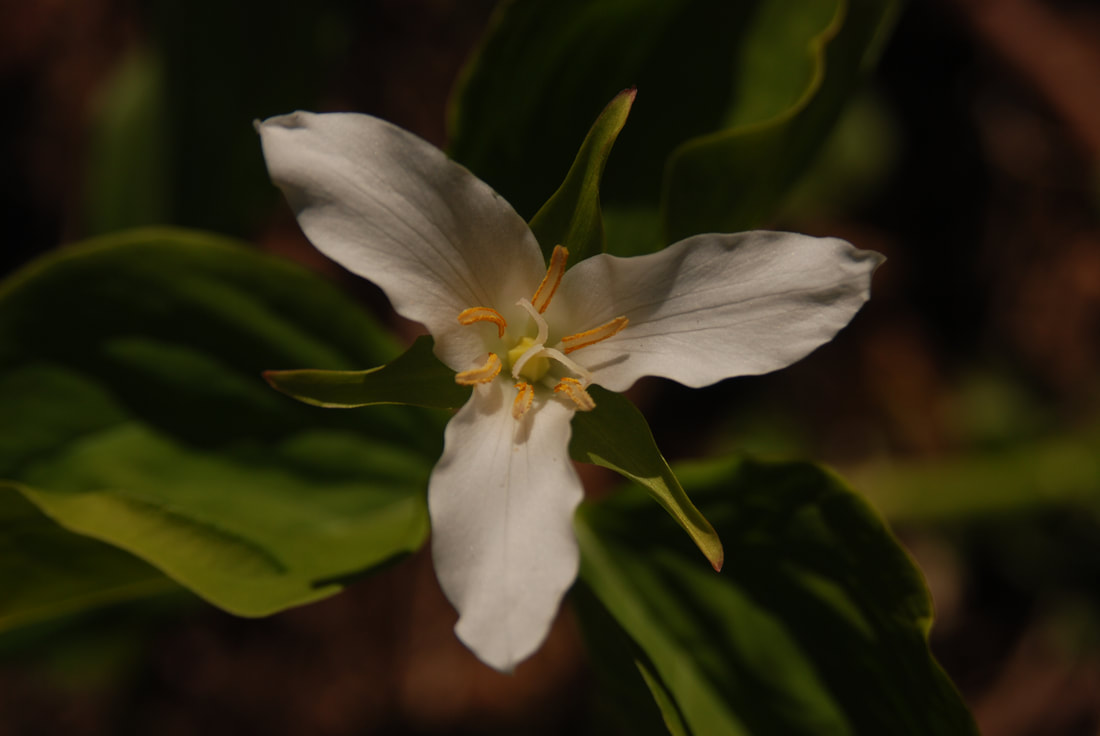 GENESIS NAME:  Trillium ovatum
DISTRIBUTION:  U.S....California, Colorado, Idaho, Montana, Oregon, Washington, Wyoming and British Columbia
SEASON:  Blooms February thru June
MEDICAL USE:  Several species of Trillium contain chemical compounds called sapogenins that have been used medicinally though the ages as astringents, coagulants, expectorants, and uterine stimulants. This is evidenced in common names given to some trilliums such as birthwort and Indian balm.
POISONOUS:  POISONOUS PARTS: Berries and roots. Only low toxicity if eaten. Toxic Principle: Toxicity unknown, but caution because of its relationship with known toxic plants
EDIBILITY:  Young, unfolding leaves. Wash leaves in warm water to remove dirt and debris. Do not use dish detergent or any type of sanitizer. Cook in boiling, salted water for ten minutes and serve like greens.
FEATURES:  Rhizome (A horizontal underground stem.) division or seed. Seeds do best when planted outdoors soon after fruits have ripened. Seedlings take many years to bloom. Divide rhizomes in fall
​LEAVES:  Trilliums (they all have three petals and three sepals) they are actually a very complex group of plants that can confuse even the best of botanists
FRUITS:   ​The trillium flower produces a fruit, the seeds of which are spread about by ants and mice. Through the summer the seeds is kept warm and moist for 90 or more days. This conditioning is followed by germination when a root will emerge from the seed.

The 8-20 in. stem of this variable trillium bears leaves in a whorl of three. The flower rises on a short stalk above the leaves and is pure white, fading to rose at the end of a week. Very large-flowered forms come from the Siskiyous of n.w. CA. This is a perennial plant. A low plant with 1 white flower on a short stalk that grows from the center of a whorl of 3 broad, ovate leaves at top of an otherwise leafless stem.
The name Wake Robin indicates that the flowers bloom in early spring, about the time the robin arrives. Only one other species in the West has a stalk between the flower and the leaves, Klamath Trillium (T. rivale), of northwestern California and southwestern Oregon. Giant Wake Robin (T. chloropetalum), which grows in dense patches west of the Cascade Mountains and in the Sierra Nevada, has no stalks at the base of the mottled leaves. Its petals vary from white to maroon; if maroon, usually with a white base. Roundleaf Trillium (T. petiolatum), from eastern Washington and Oregon, has long stalks on the leaves and dark red-brown petals.

Forty-three species of trillium are known worldwide with a startling thirty-eight represented in North America. Within the United States, the bulk of Trillium diversity is found in the eastern states where Terrific Trilliums are among the favorites on many a spring wildflower walk. Their blooms can be either showy or obscure, a dazzling display of color on a hillside, or a chance surprise hidden under a leaf. With their eye-catching flowers, it is hard to imagine anyone not enjoying the sight of a trillium along a trail on a fine spring morning!
Despite the visual simplicity of trilliums (they all have three petals and three sepals) they are actually a very complex group of plants that can confuse even the best of botanists. The many different species of trillium exhibit only a few and obscure structural differences, making separating the species difficult. One might think that the striking colors of the flowers might be a useful character for identification, yet many of the species have a variety of color forms, and it is not uncommon to find the two growing together! Additionally, many species hybridize, making identifications more difficult.
All trillium species belong to the Liliaceae (lily) family and are rhizomatous herbs with unbranched stems. Morphologically, trillium plants produce no true leaves or stems above ground. The “stem” is just an extension of the horizontal rhizome and produces tiny, scale like leaves (cataphylls). The above-ground plant is technically a flowering scape, and the leaf-like structures are bracts subtending the flower. Despite their morphological origins, the bracts have external and internal structure like a leaf, function in photosynthesis, and most authors refer to them as leaves.Trilliums are generally divided into two major groups: the pedicellate and sessile trilliums. In the pedicellate trilliums, the flower sits upon a pedicel that extends from the whorl of bracts, either “erect” above the bracts, or “nodding” recurved under the bracts. In the sessile trilliums there is no pedicel and the flowers appear to arise directly from the bracts. The photos below represent some of the diversity in each group.
In addition to medicinal uses, like many of our native, showy wildflowers, trilliums are also subject to pressure from overzealous collectors and habitat loss due to land-use changes. If you desire to have trilliums in your garden, please visit a reputable nursery that propagates these species using ecologically sustainable methods.
Remember, collecting seed or any other plant material on the national forests and grasslands requires a permit. Please contact your nearest Forest Service office to request a permit before attempting to collect any native plant products. Native trilliums and their many derived hybrids and cultivars are readily available from the nursery trade and should not be collected in the wild.

TEN THINGS TO KNOW ABOUT TRILLIUMS:
1. There are 39 native trilliums in the U.S. All trillium species belong to the Liliaceae (lily) family. Native to temperate regions of North America and East Asia, the genus ‘Trillium’ has 49 species, 39 of them are native to various areas across the United States.
2. The plants are extremely long-lived. Trilliums are relatively easy to grow from their rhizomatous root but slow to develop and spread. To make up for it, the plants can live for up to 25 years.
3. Early season sunlight is needed. Even though it is a woodland species, the dormant plant needs to be warmed by the early spring sun. It’s best to avoid planting them in a location that never gets sun (such as the north side of a building).
4. Trilliums are either sessile (the flower sits directly on top of its whorled leaves) or pedicellate (the flower is raised on a short stalk). Sessile trilliums usually have mottled foliage, while pedicellate trilliums have showier flowers.

5. Traditional names for trilliums: Toadshade (for its resemblance to a toad-sized umbrella), Wakerobin (for its appearance with the first robins), and Birthroot (for its medicinal uses during childbirth).
6. Red Trillium (Trillium erectum) has no nectar and is pollinated by flies (Diptera) and beetles (Coleoptera). The petals of the flowers exude an odor that attract carion flies and beetles which pollinate the flower.
7. Trillium grandiflorum is pollinated by Hymenoptera insects, including honey bees, bumblebees, and wasps.

8. Trilliums are not very competitive. It’s best to avoid planting them with very aggressive species.
9. Seed germination is ‘a process’. The trillium flower produces a fruit, the seeds of which are spread about by ants and mice. Through the summer the seeds is kept warm and moist for 90 or more days. This conditioning is followed by germination when a root will emerge from the seed. In general, trillium seedlings do not produce a green leaf during their first season. The sprouted seeds are then kept damp and cool for 90 to 120 days. The seedling develops in the dark, underground, for almost a year before sending a green leaf up to find the light.
10. Trillium may die-back in the heat of summer, but don’t cut them back. Picking a trillium flower does not kill the plant but damage can result if the green leaves are taken as well. If the leaves are taken you won’t see renewed growth until the following year – which may not happen at all depending on the size of the rhizome. This fact makes the colonies susceptible when they are heavily browsed by deer. Plants will die out after several years of repeated browsing.
Bonus #11!  For best results, mulch with leaf litter. This woodland native loves a leaf covering that replicates its forest home and keeps the ground tempreature and moisture ‘just right’ (one more reason to keep those leaves in your yard). 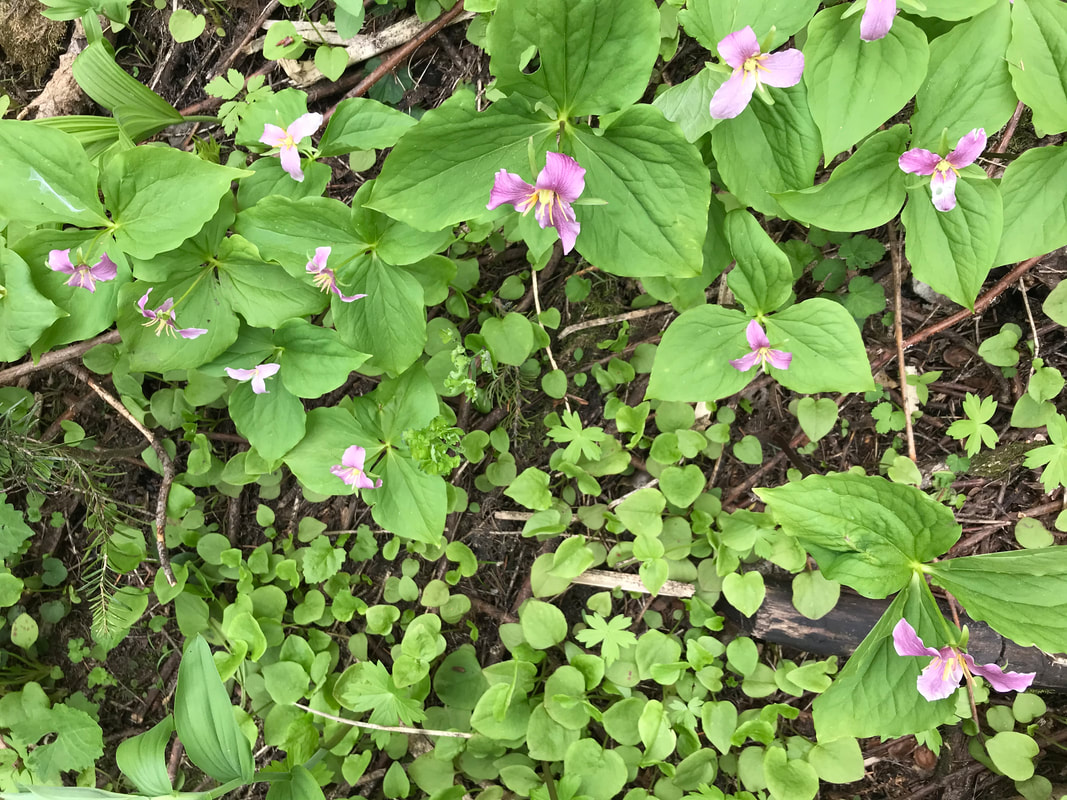 THE BELOW IMAGES ARE OF AGED TRILLIUMS FOUND IN THE I.P.N.F. 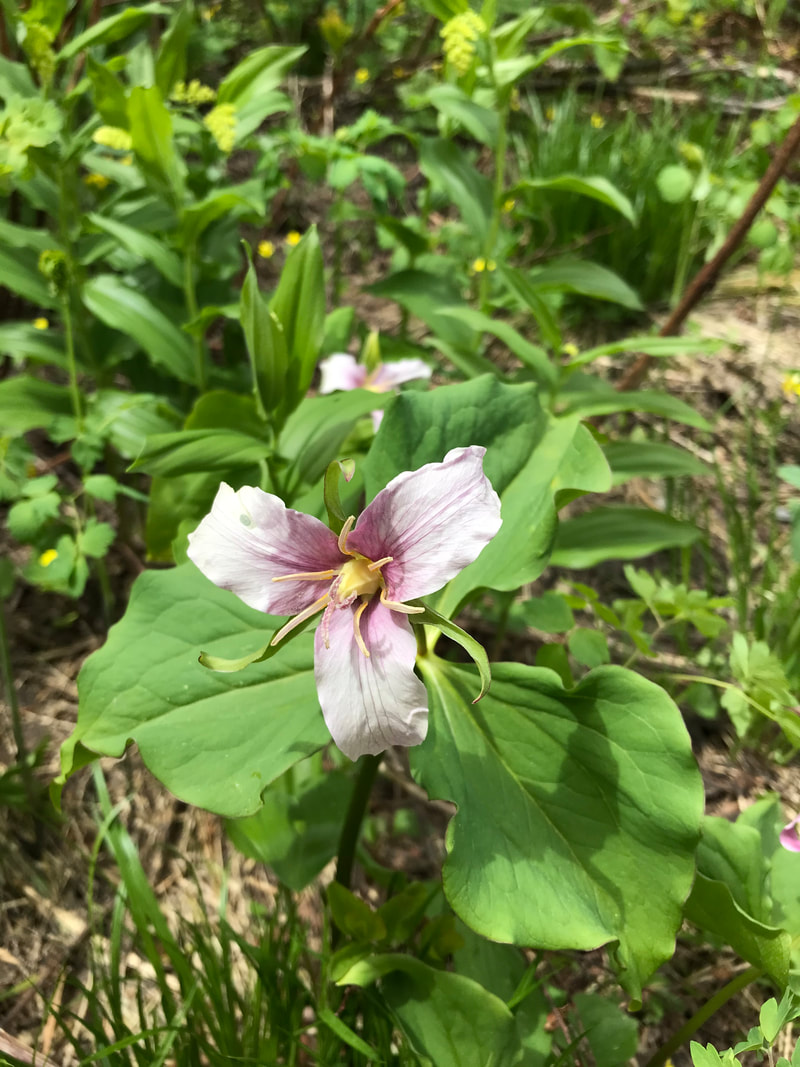 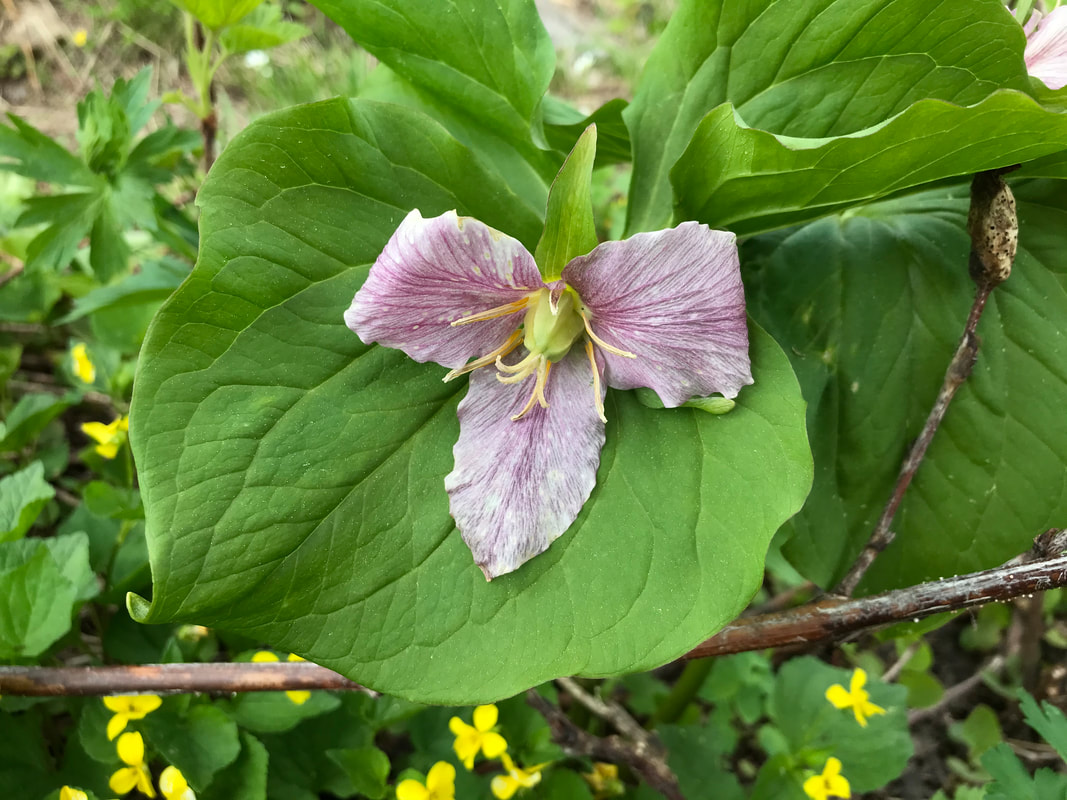 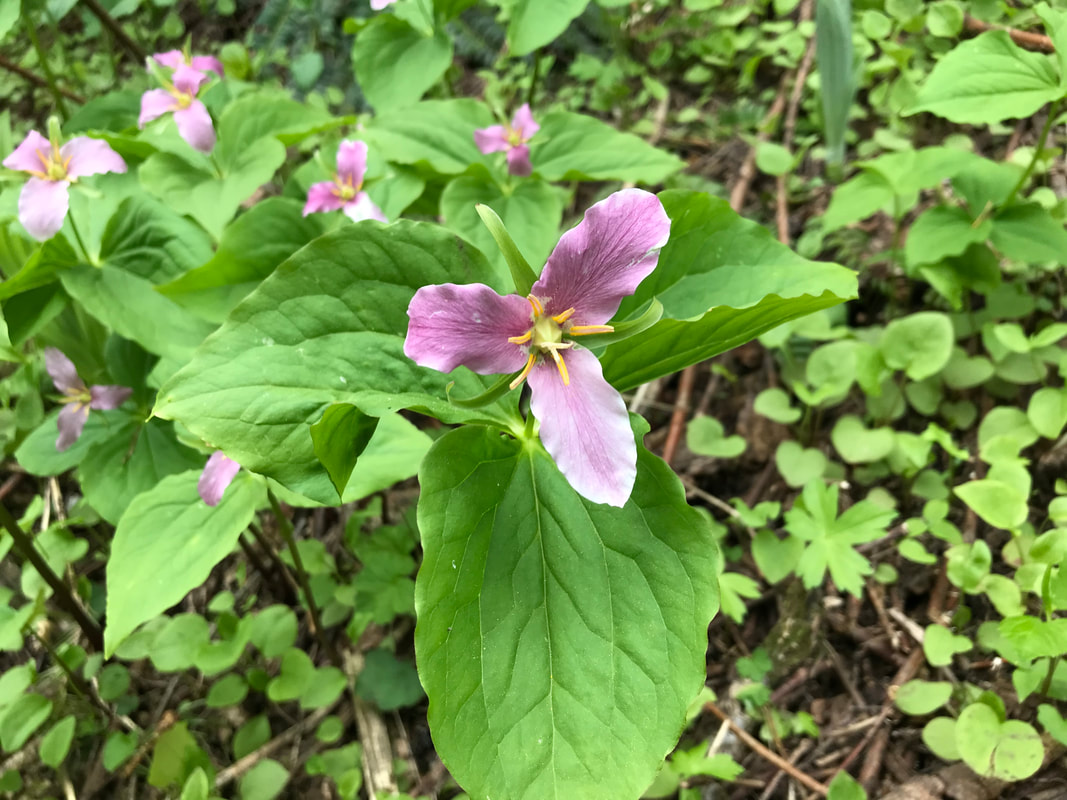 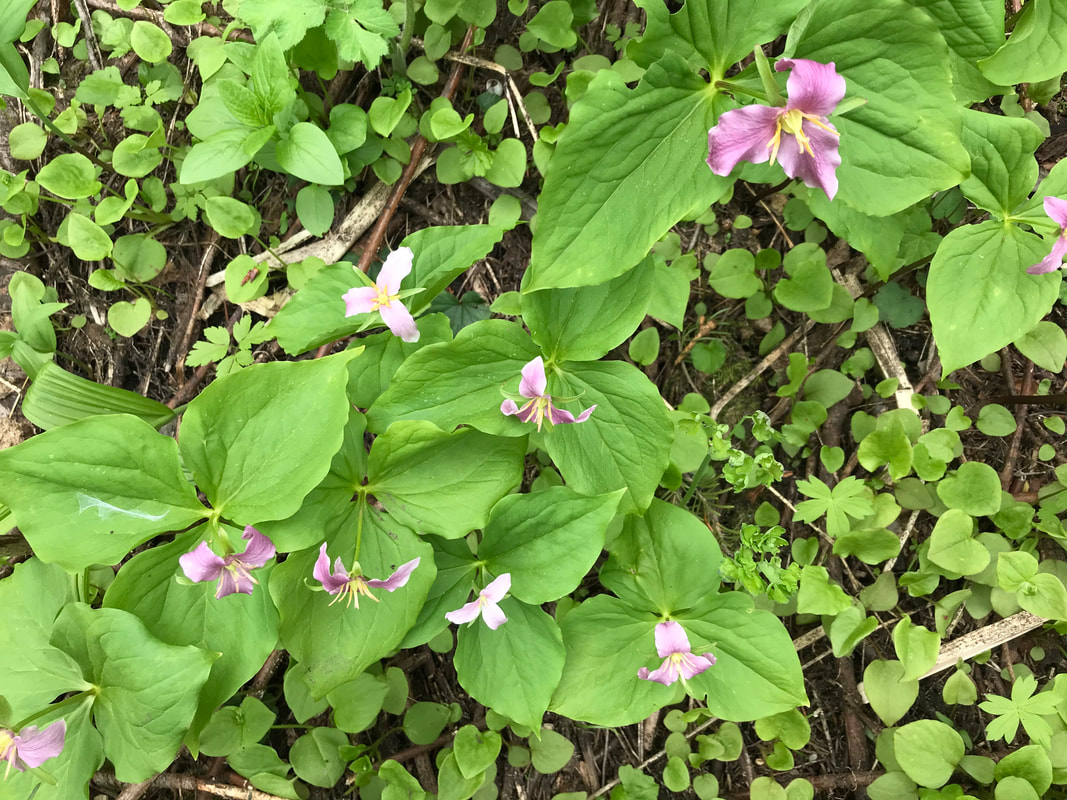 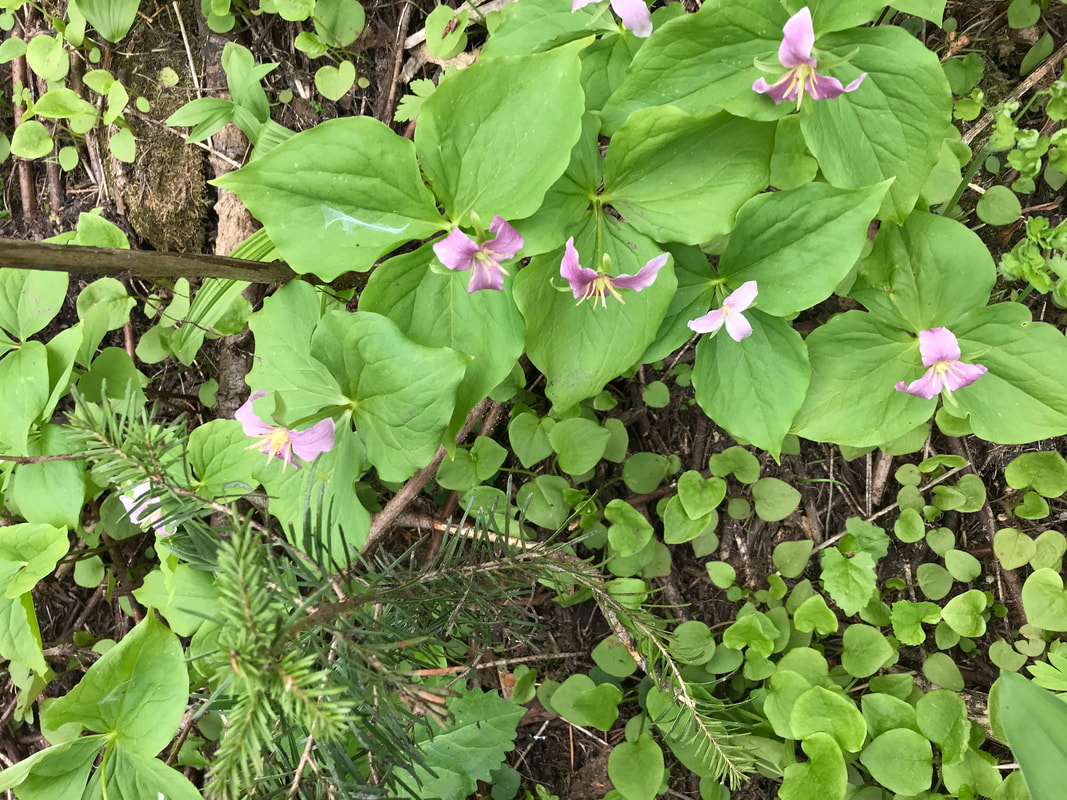