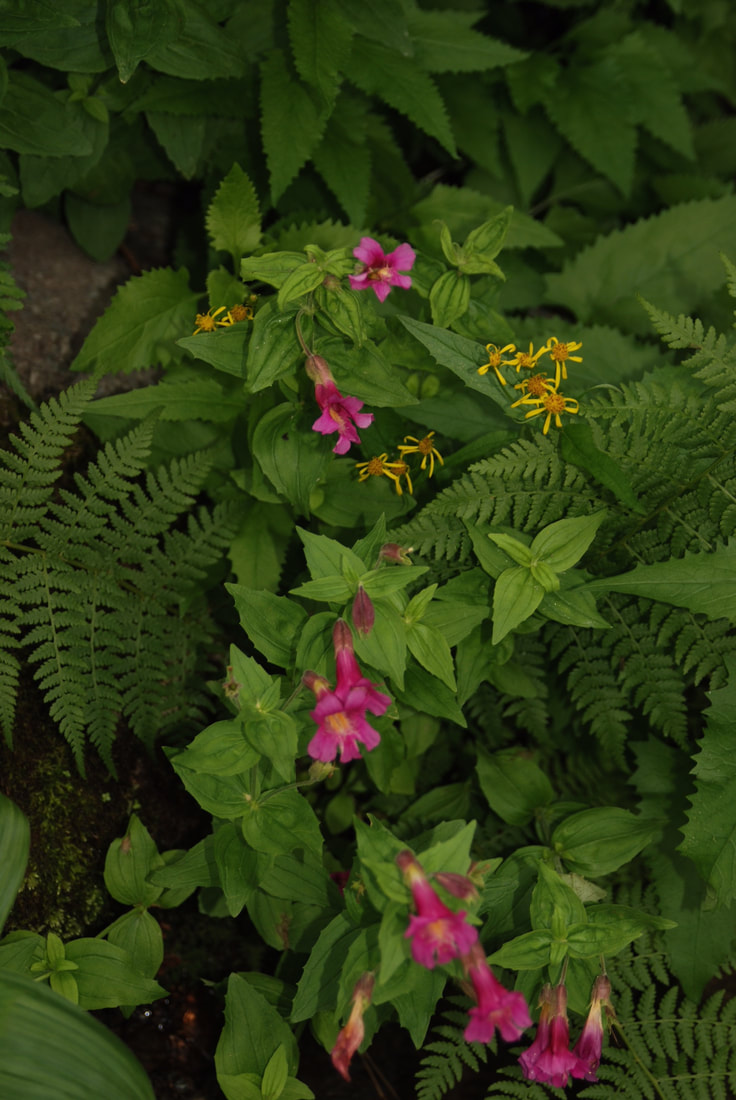 GENESIS NAME:  Mimulus lewisii
DISTRIBUTION:  AL, WA, ID, MT, OR, CO, UT, NV, CA.  Canada..BC, AB
SEASON:  Summer
MEDICAL USE:  NA
POISONOUS:  NO
EDIBILITY:  Leaves and stems - raw or cooked
FEATURES:  Mimulus lewisii (Lewis' Monkeyflower or Great Purple Monkeyflower) is a perennial herb in the Phrymaceae (Lopseed) family. It is native to western North America from Alaska to California to Colorado, where it grows in moist habitat such as streambanks at elevations between 5,000 and 10,000 ft. In California it is found primarily in the Sierras. It is named in honor of Meriwether Lewis. This is a mountain species that requires higher elevations, snow in winter, cool temperatures in summer, and plenty of water. The flowers are attractive to hummingbirds. This would be a nice plant if your garden is in Mammoth Lakes or Truckee.
LEAVES:   The opposite leaves are lance-to egg-shaped with pointed tips and have palmate venation of 3-7 strong veins. The leaves range from 3-7 cm long and the margins are irregularly toothed.
​FRUITS:   NA

When Meriwether Lewis and William Clark’s Corps of Discovery started on their western trek to the Pacific Ocean in 1804, most of the plant species of western North America were still unknown to the scientific world. Although not formally trained as a botanist, Lewis had received some training from Dr. Benjamin Barton, the most prominent American botanist of the time. Lewis dutifully catalogued, collected, and dried hundreds of plant specimens along the route from St. Louis to Oregon and back. Sadly, a large number of collections from 1805 were destroyed when the cache they were buried in was flooded by the Missouri River. Other specimens that made it back to Washington and Philadelphia were apparently lost. Remarkably, at least 239 specimens have survived to the present day. Botanical historian Wayne Phillips believes these represent 175 plant species, most of which proved to be new to science.
Among the species, Lewis and Clark first documented, was the brilliant pink, or reddish-purple flower Lewis’s monkeyflower (Mimulus lewisii). Frederick Pursh, the 19th Century botanist who identified most of the expedition’s collections, named the species in Lewis’s honor in an 1814 publication and included a handsome color print of the species, taken presumably from material gathered by Lewis (but apparently the actual specimen was among those that were lost). Based on their journals, the explorers encountered Mimulus lewisii “on the head springs of the Missouri [River], at the foot of Portage hill” a site that is interpreted by Phillips as the head of Trail Creek, Montana, just below Lemhi Pass.
Lewis’s monkeyflower is a tall perennial forb, reaching a height of 3½ feet. It occurs commonly along mountain streamsides, often among rocks and boulders, from southeastern Alaska to Alberta and south to California, Utah, and Colorado. The opposite leaves are distinctive in being sessile, coarsely toothed, and having prominent palmate veins. The flowers have 5 petals fused at the base into a short tube and flaring at the mouth into two weakly-defined lips. To Linnaeus, these lips had the appearance of a smile or grin, earning the genus its name Mimulus after mimus for a grinning comic actor. The “smiling corolla” may also account for the common name of monkeyflower, for its fanciful resemblance to a grinning simian.
Over 100 species of Mimulus occur worldwide, with nearly 70% native to California and even more centered in the western United States. Most of these species are delicate annuals or have bright yellow flowers. Lewis’s monkeyflower is one of the easiest Mimulus species to recognize due to the combination of large, pink flowers and perennial growth form.