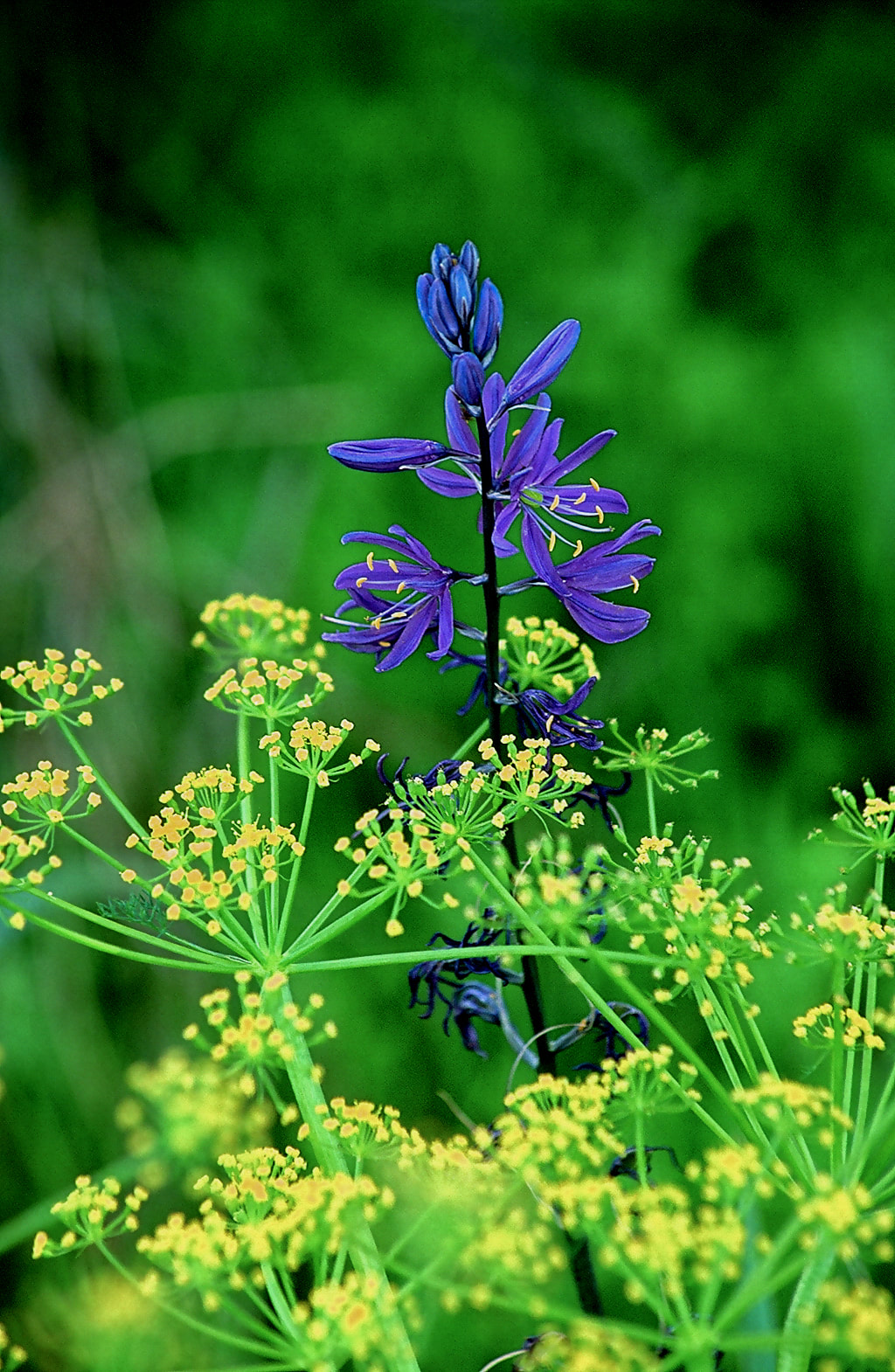 GENESIS NAME:  Camassia quash
DISTRIBUTION:  CA, ID, MT, NV, OR, UT, WA, WY.   Canada..BC
SEASON:  Blooms May thru August
MEDICAL USE:  Used as a cough medicine, blue camas bulbs where boiled and the juice mixed with honey to make a sweet therapeutic tea. It has been used as a medication for a long time to treat common infections at home.
​POISONOUS:  While Camas is edible, a close looking Death Camas is poisonous.  Death camas (Zigadenus spp.) is a common poisonous plant on foothill rangelands in western North America. The steroidal alkaloid zygacine is believed to be the primary toxic component in death camas.
​EDIBILITY:  The sweet bulbs of the Common Camas are considered by many to be a Northwest native food delicacy.  The taste is often compared to a baked pear, fig, or sweet potato, and can even used to sweeten other foods. The longer they’re cooked, the sweeter they get. Native American peoples, wild foragers, and sustainable gardeners have and continue to value this plant as nourishing food.
Common Camas is also a major source of carbohydrates and very high in protein. It contains 5.4 ounces of protein per pound of root, even more hearty than a filet of Salmon with 3.7 ounces per pound.  Bulbs can be eaten immediately after cooking, or dried for future use.
CAUTION:  If harvesting from the wild, only harvest with expert advice.  Especially when not in flower, Common Camas can be confused with another species called Death Camas.
FEATURES:  Common camas is a stout, robust plant 12-28 inches (30-70 cm) tall with a dense inflorescence.
LEAVES:  The stems have a length between 30 and 90 centimetres (12 and 35 in). The leaves are basal and have a grass-like appearance.
​FRUITS:   The pale blue to deep blue flowers appear in late spring to early summer (May to June in their native habitat). They are arranged in a raceme at the end of the stem. Each of the radially symmetrical, star-shaped flowers has six petals.

A bulbous plant with basal clusters of narrow, grass-like, bright green leaves. The flowering racemes are 1-3 ft. tall with dozens of showy, star-like, sky- to deep-blue flowers. Light to deep blue-violet, star-shaped flowers in a raceme; several narrow, grass-like leaves grow mostly near the base. The three sepals and three petals all share the blue color.
This species is sometimes so frequent as to color entire meadows blue-violet. Indians pit-roasted the bland bulbs with other leaves, and also boiled them, which yielded a good syrup. Another similar species is Leichtlin's Camas (C. leichtlinii), which grows only west of the Cascade Mountains, from southern British Columbia to the southern portion of California's Sierra Nevada, and has radially symmetrical flowers.

This plant blooms in early to mid-spring and grows in moist meadows and on grassy slopes. The ones photographed here were in a marshy area along a stream at an elevation of around 5300 feet. The bulbs of the plant are edible and were used as a significant food source for native Americans. However, the bulbs look similar to those of Death Camas - the name of that plant is indicative of its poisonous nature - so beware!

Common camas is a stout, robust plant 12-28 inches (30-70 cm) tall with a dense inflorescence. It is a
perennial herb that grows from an edible bulb. The leaves are long
and narrow, grass-like, and emerge from the base. Common camas
flowers are light to deep blue; more than three flowers in an
inflorescence may be open at one time. Camas flowers have six
tepals, six stamens, and three stigmas. The inflorescence is a spike-
like cluster borne on a leafless stem that is held above the leaves.
Common camas is distinguished from great camas (Camassia
leichtlinii ssp.suksdorfii) by the following: the flowers are slightly
irregular, with the lowest tepal curving outward away from the stem; the anthers are bright yellow; the plant is relatively short and stout, with shorter flower stalks and smaller bulbs; and there is no waxy powder on the leaves. Common camas blooms from April through June. The fruits are barrel-shaped to three-angled capsules, splitting into three parts to release many black, angled seeds