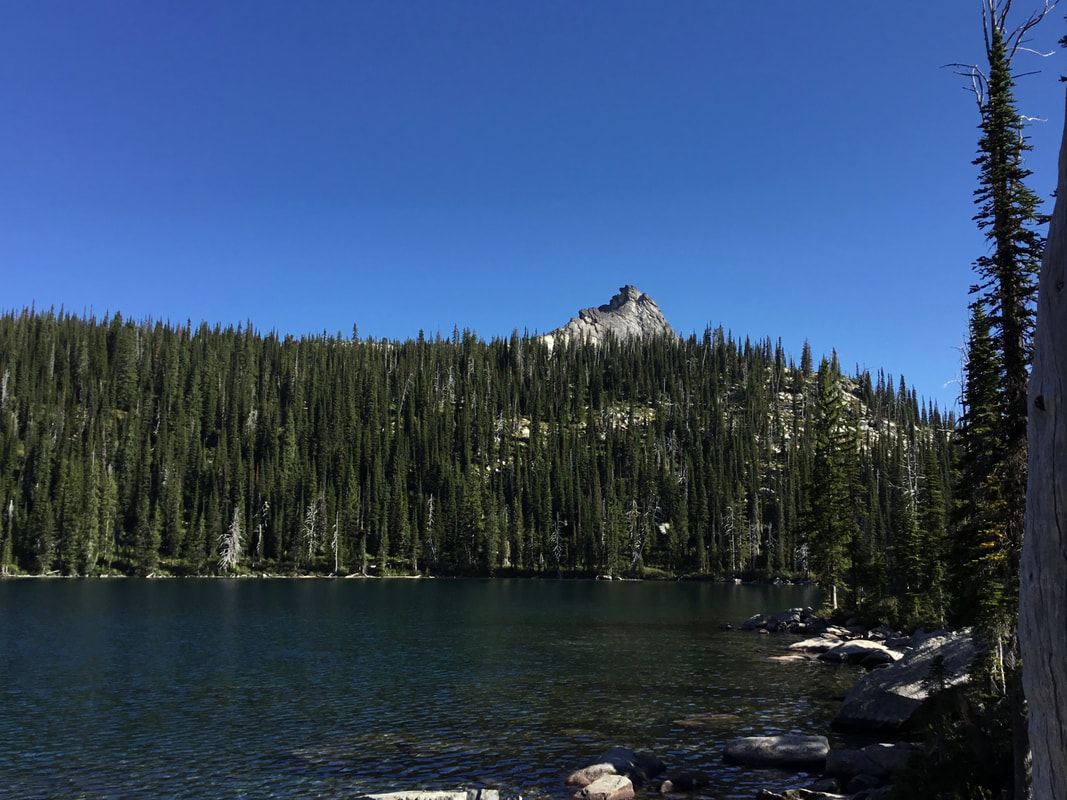 WE HAVE ADDED THE AREAS SHERIFF’S EMERGENCY PHONE NUMBERS FOR EACH TRIP WRITE UP UNDER THE RANGER DISTRICT INFO. IF AN EMERGENCY OCURRS, EVALUATE YOUR CIRCUMSTANCES AND CALL ONLY IF NEEDED.
​Hike to Harrison Lake
From along side the Pack River, head up trail #217 for 2.3 miles to the lake. Along the trail there are several view points to stop at to view the Beehive, the Seven Sisters of the Selkirk Crest, the Twins, and a beautiful rock basin below the crest. About 2 miles up the trail, you will find a junction with Trail # 6 that leads in from the Myrtle Creek drainage. Above the junction for Trail 6, the trail breaks out onto granite. Follow the cairns up the huge granite slabs to the lake.

Around the lake, Harrison Peak stands high to the north, while the Selkirk Crest fills the western view. To the south, are huge granite ridge descends to just below the lake. To the east, the eastern arm of the Selkirk Crest.

​There are several campsites on the SE end of the lake, as well as some cool rock formations, and a fisher person trail along its shore line.

From Sandpoint, drive north for 10.5 miles to Samuel. There is a gas mart on the west side of the highway, just after the Pack River Road #231. Turn up the Pack River road for 20 miles on a good dirt road to the trailhead.

Hike to Harrison's summit
From Harrison Lake, look to the NNE for a faint climbers trail heading up towards and under Harrison Peak's east face. This trail is easy to follow until you are directly under the peak’s massive east wall. Stay next to the face as you scramble up to the saddle on the NE of the summit. The last 20 vertical feet is more difficult but doable. If you feel uncomfortable with this approach, continue north into the forest, and go up from there.
After spending some time on the summit, walk north on the summit ridge, stopping to take in the view of the massive Harrison Peak overhang.
To descend, you can follow your route up, down, or you can head due east down thru the woods to Trail #6, that skirts the entire east and south east side of the peak. At Trail #6, turn right (SW) to the Harrison Lake Trail #217

Along Trail #217 from the Harrison Lake trailhead, look for an obscure trail to the NE at about 2.25 miles. Look for a sign denoting Trail #6, at a sharp right turn. Turn right (NE) onto Trail #6 for about a mile + and head up hill towards the peak. It’s about a .75 of a mile to the summit block. Look for some rock slabs to scramble over to achieve the summit block. The summit is on your left (SW), and is dramatically overhung. PLEASE USE EXTREME CAUTION WHILE ON THE SUMMIT. After spending some time on the summit, wonder north to find a great lunch spot. After lunch, continue north along the ridge top. Soon you will come to its north end, where there are spectacular views of the Two Mouth Lakes Basin.
Come back towards the summit about half way, and turn left, (east, down hill) to Trail #6. You can’t miss Trail 6, it skirts the entire east flank of Harrison Peak in about a mile.
Trail #6 comes south from the Myrtle Creek basin.

This option takes you to the Selkirk Crest via the route described above. Then turn left (south) and ascend Peak 7171’. You can see Peak 7171’ from the north end of Harrison Lake. It is the ridge line running eastish from Peak 7171,.
Have your lunch on top of 7171, with credible views, before heading down the ridge.
​The ridge heads east and skirts Harrison Lake about 600 feet above. Eventually, the ridge starts a descent down to near the Pack River out of Harrison Lake.
There is no trail, so wonder down the granite slabs, staying centered on its crest. Near the bottom of the ridge, where it gets steep, look for a north south band of greenery that skirts the cliffs. If need be, walk SE on lesser slopes to get to the greenery. Once there, the greenery takes you back towards the lake.
Where ever you cross the Pack River up high, turn left (North) to get back to the lake.
​You might just fly around on Google Maps to familiarize yourself with this real nice off trail adventure.

On 9.15.22 we hiked into Harrison Lake, looking for a scramble in it's basin. We chose to head up my regular route to the Selkirk Crest on Harrison Lakes's west wall.
After boulder hopping around the lake. we headed up to the second lowest notch in the back wall. When you can hike up thru greenery, do so, but soon you will have to start a really fun scramble to the crest.
Just above on the ridge to the left (S), is a great place to rest and grab snacks and images.
As we were eating, we noticed a cool high meadows to the SW of the lake, and below us to the SE.
We dropped off the crest, and headed SSW to the far ridge line east of Peak 7171'.
The high garden between your ascent and the south wall, is well worthy the visit.
Head SE until you access the ridge, heading east high above the lake.
While walking this ridge, always stay centered on the ridge. Do not allow your path to drop off either side of the ridge.
As you get closer to the campsite area at Harrison Lake, work your way carefully to the  north, and down a steep but safe patch of greenery to the Upper Pack River.
Walk back out to the lake, to marvel at the cool route you just did, and have a snack before heading down.
None of this OPTION is on any kind of trail, so yahoo a lot, along the way.

No matter which route you take to get to the lake, they are easy with no real hazards.
However, all other hikes from Harrison Lake requires care.
As you come along the east side of Harrison Peak, the route becomes steeper and requires great care.
By using the brush and trees, you can get above the steep section. Once out of the vertical gulley, there are several low angle granite slabs to scramble over to reach the summit.
When you are approaching Harrison's  summit block, PAY CLOSE ATTENTION TO WHERE YOU ARE WALKING. The first time I did this route, I came way too close to walking off the edge. 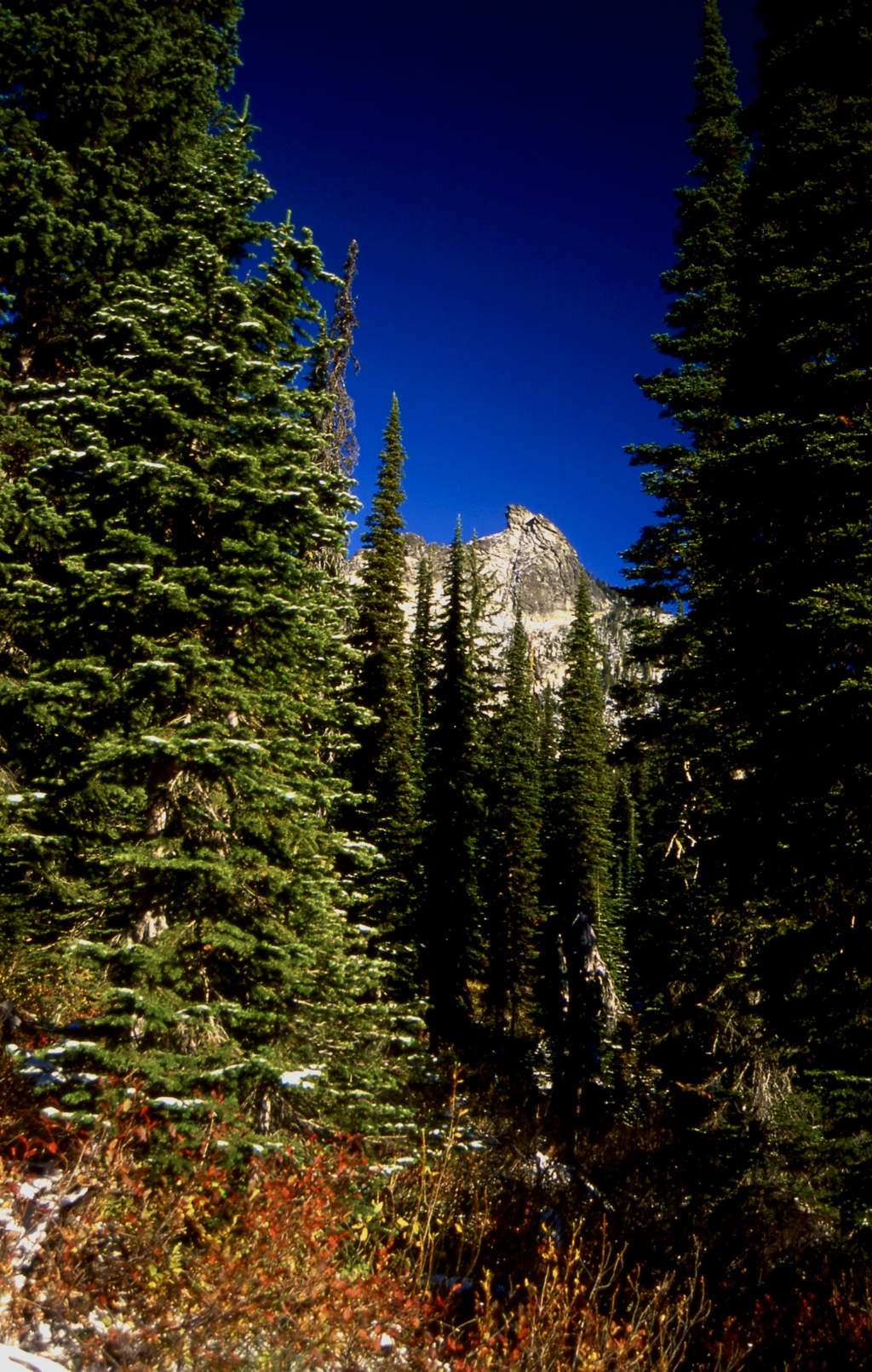 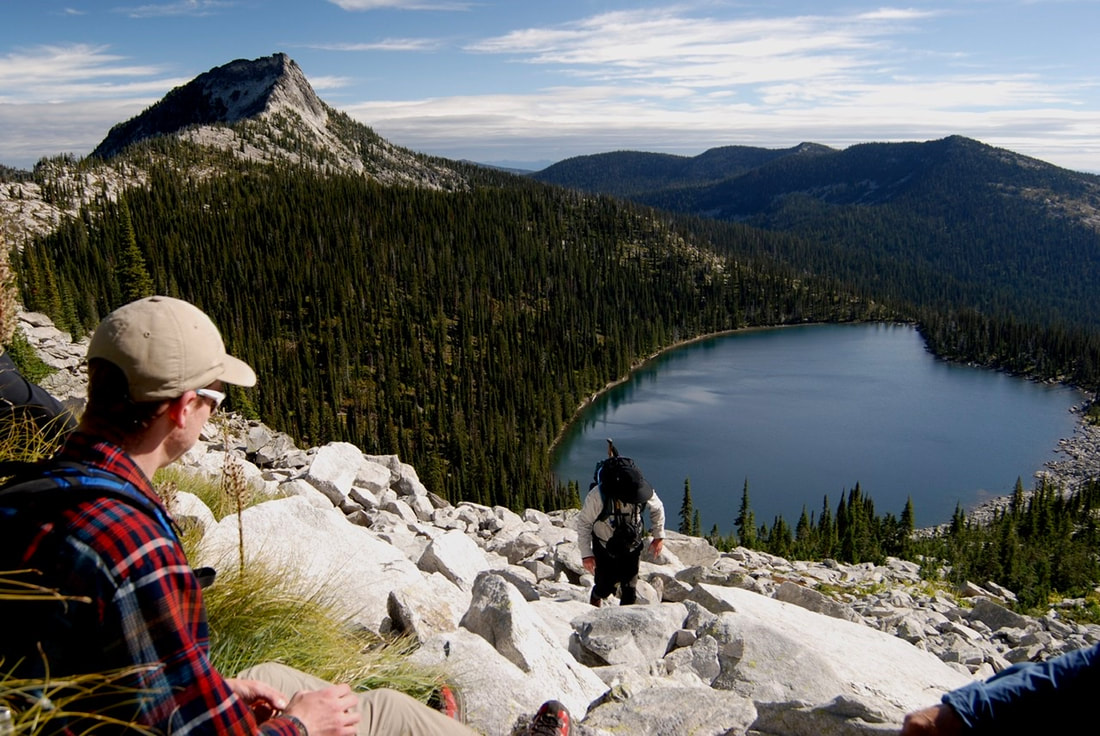 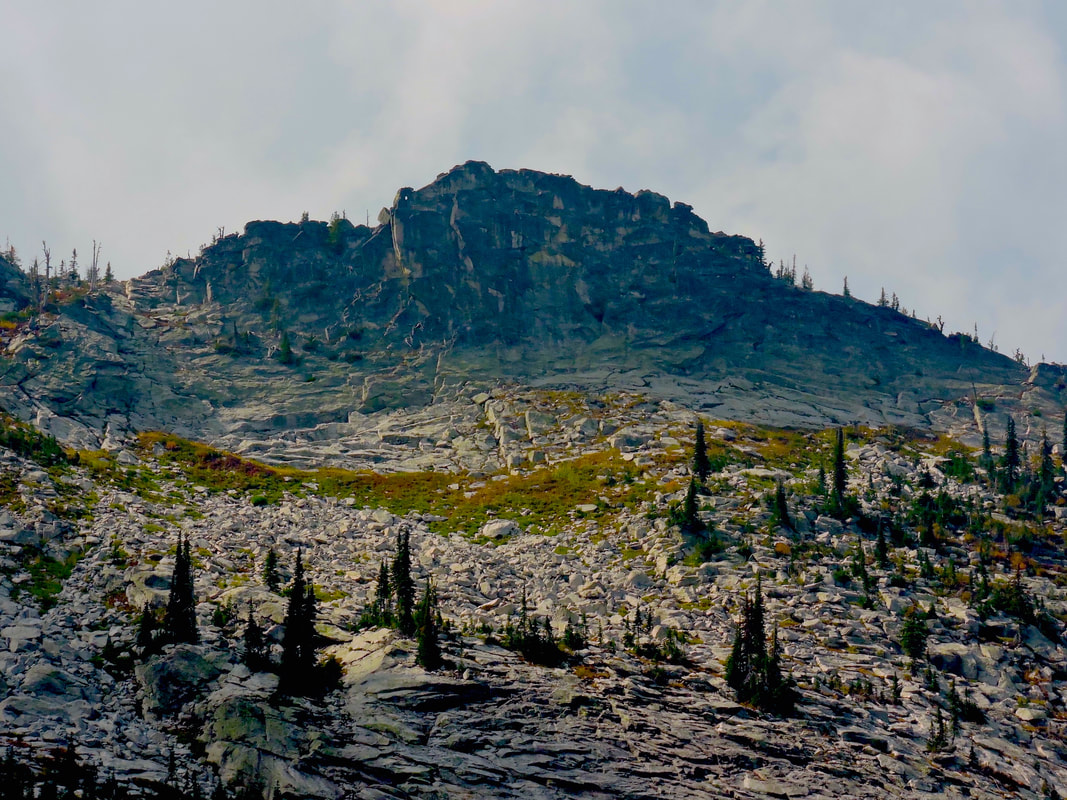 A HIGH GARDEN ABOVE HARRISON LAKE 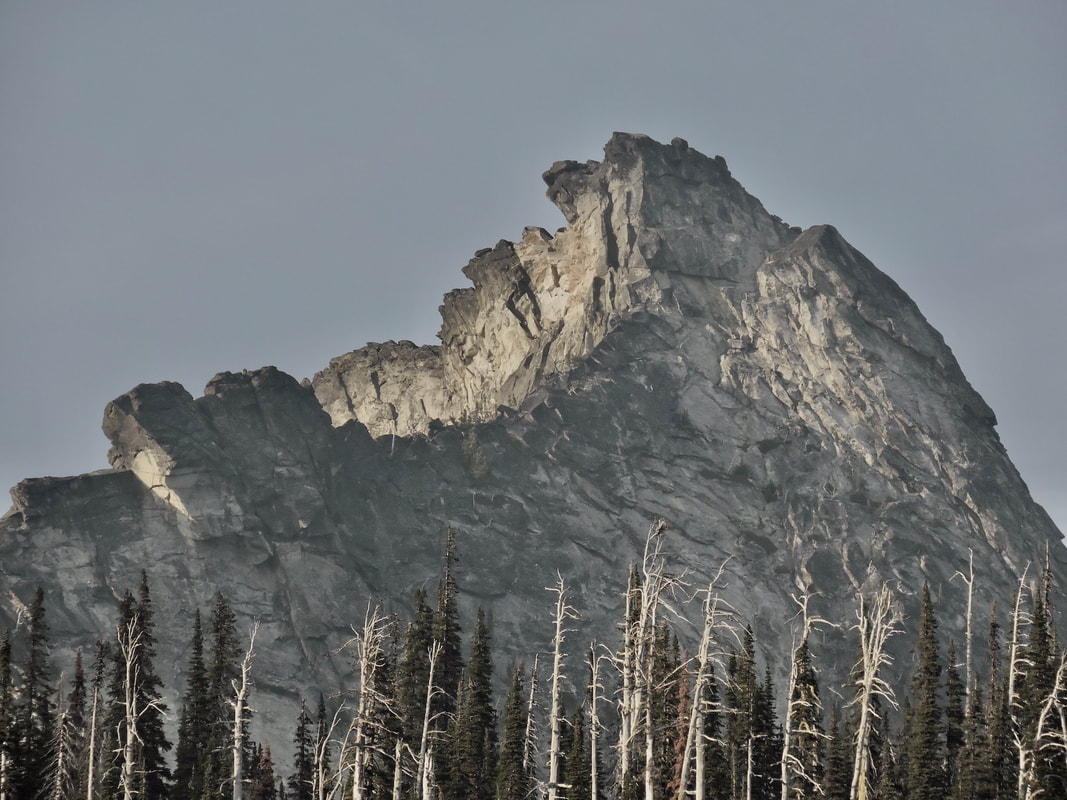 HARRISON PEAK FROM NEAR PEAK 7171' 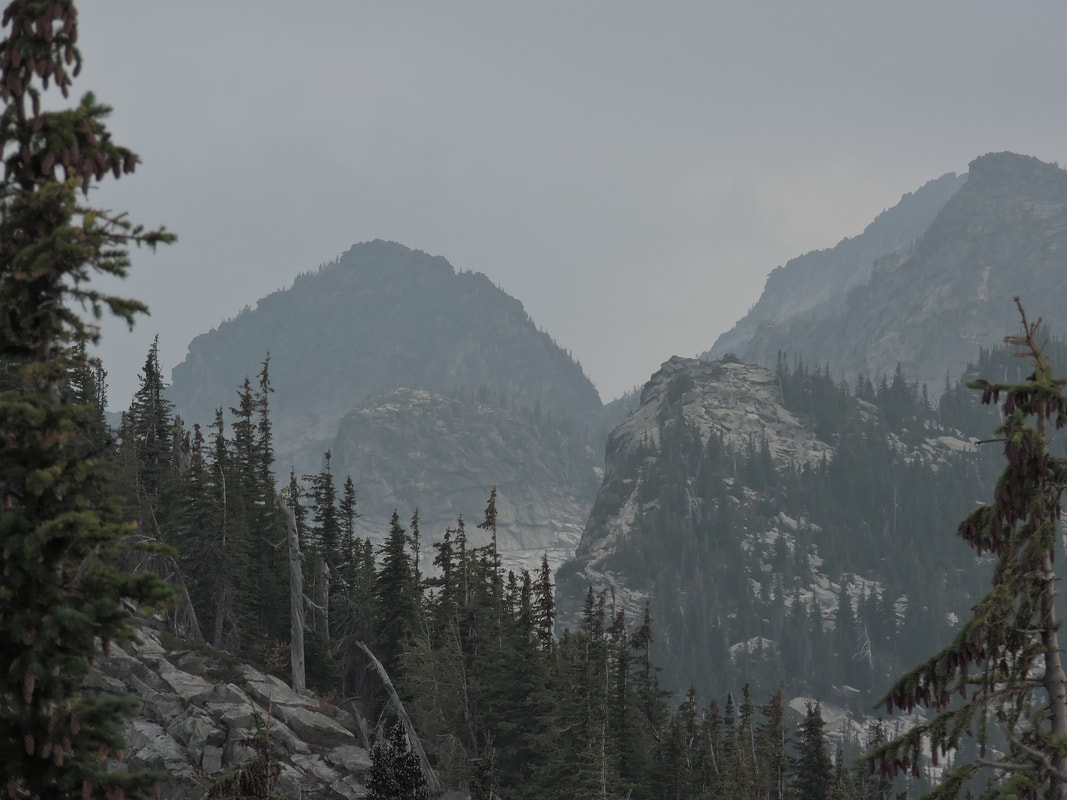 THE SOUTH TWIN AND OTHER SELKIRK CREST PEAKS,
​TAKEN FROM NEAR PEAK 7171' 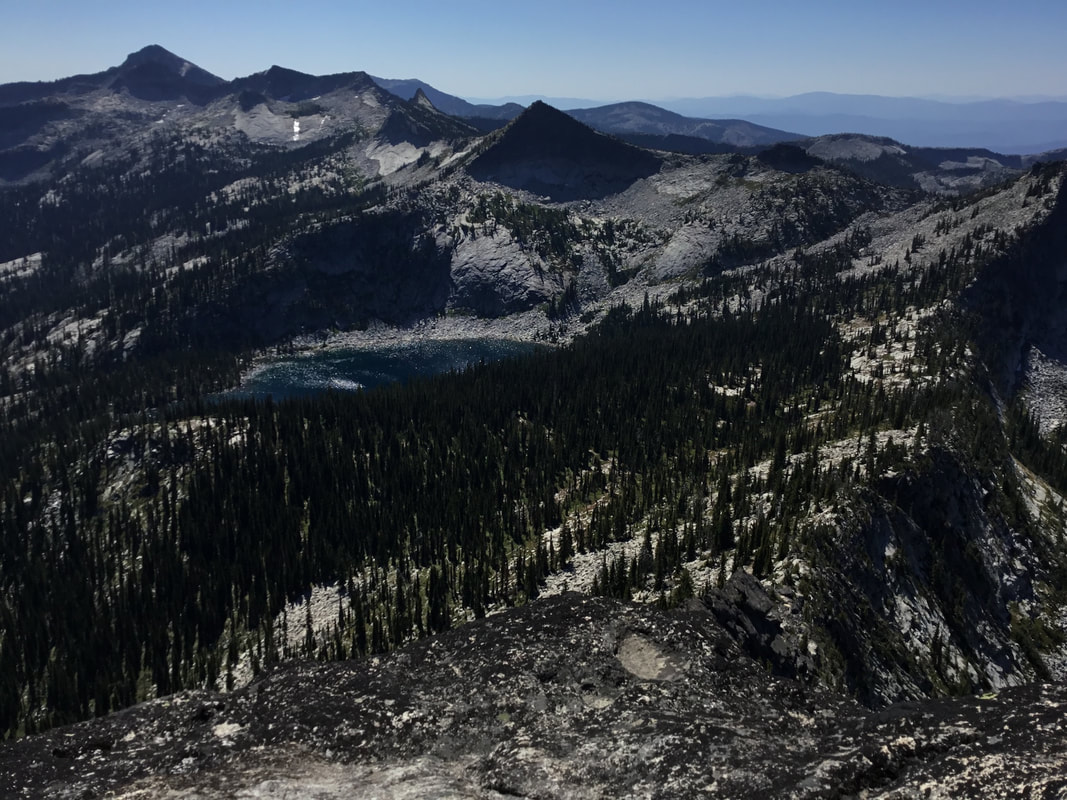 HARRISON LAKE FROM HARRISON PEAK 7292' & PEAK 7171'ABOVE
OPPOSITE DIRECTION FROM THE IMAGE BELOW. 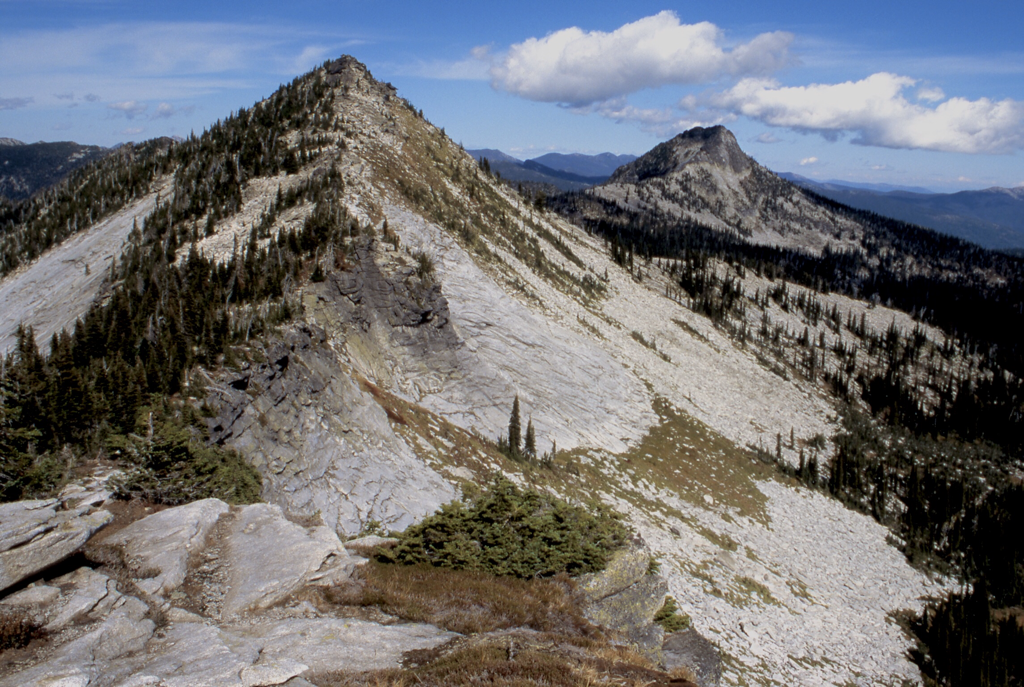 PEAK 7171’ ON LEFT WITH HARRISON PEAK ON RIGHT. HARRISON LAKE IS BETWEEN 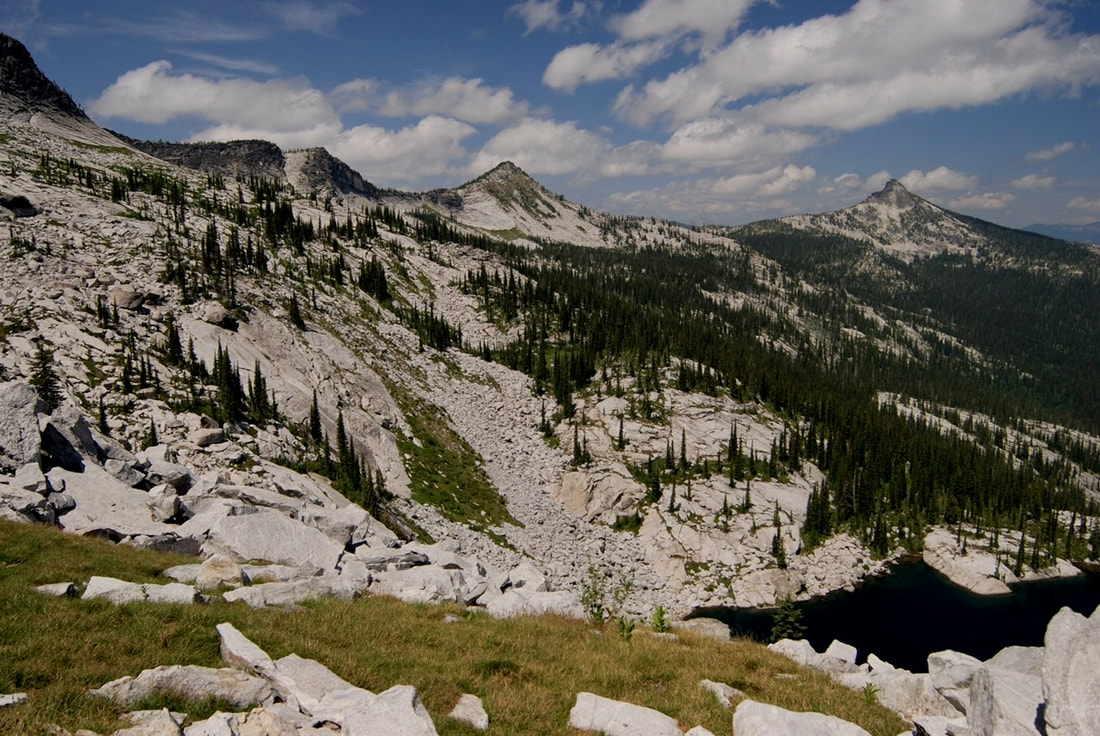 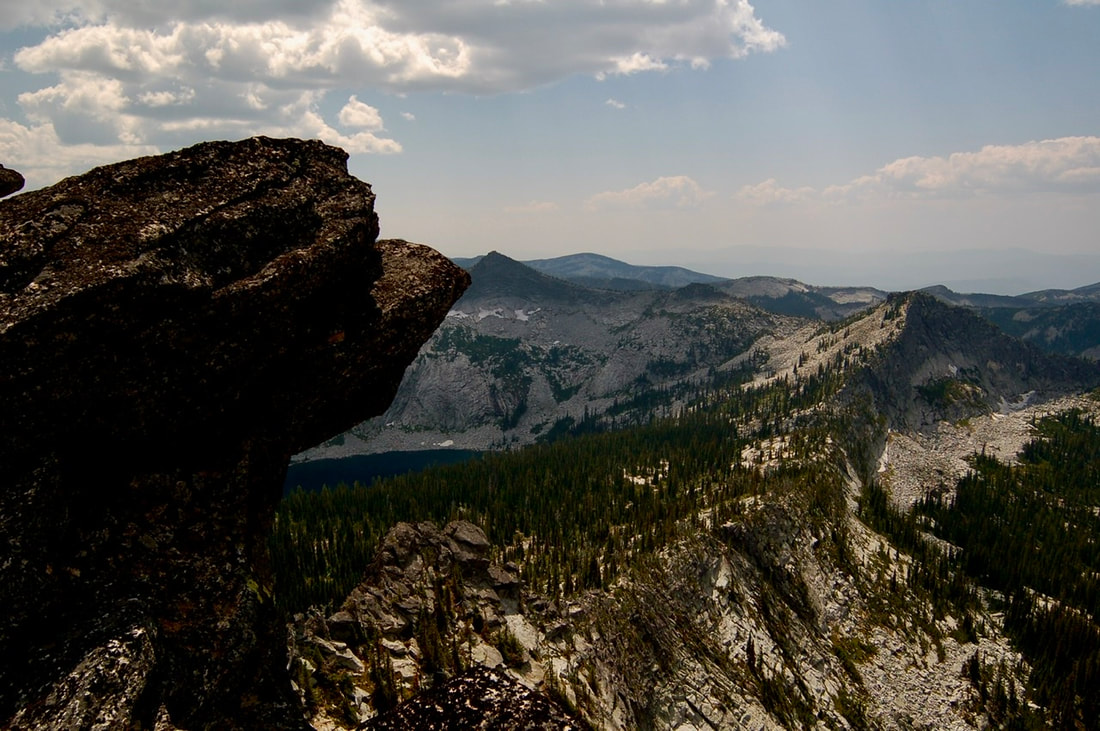 FROM HARRISON PEAK’S SUMMIT, HARRISON LAKE AND THE SELKIRK CREST 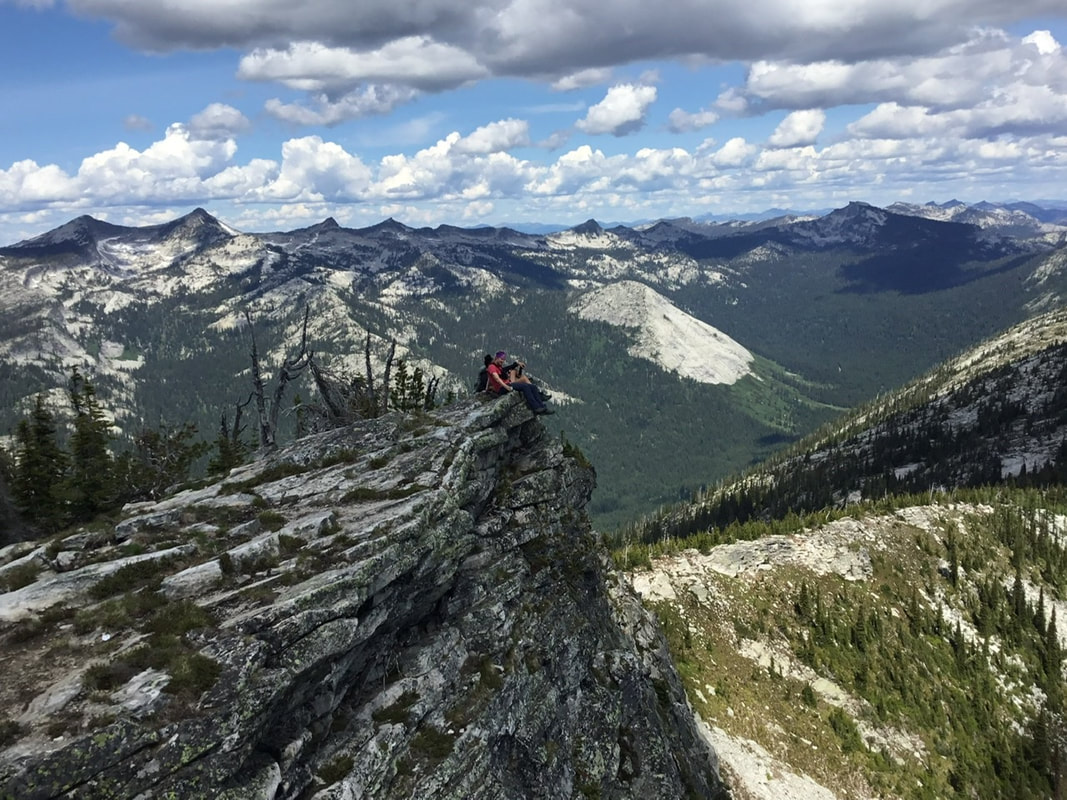 FROM ROMAN NOSE SUMMIT, THE SEVEN SISTERS, THE BEEHIVE DOME AND HARRISON PEAK ON RIGHT 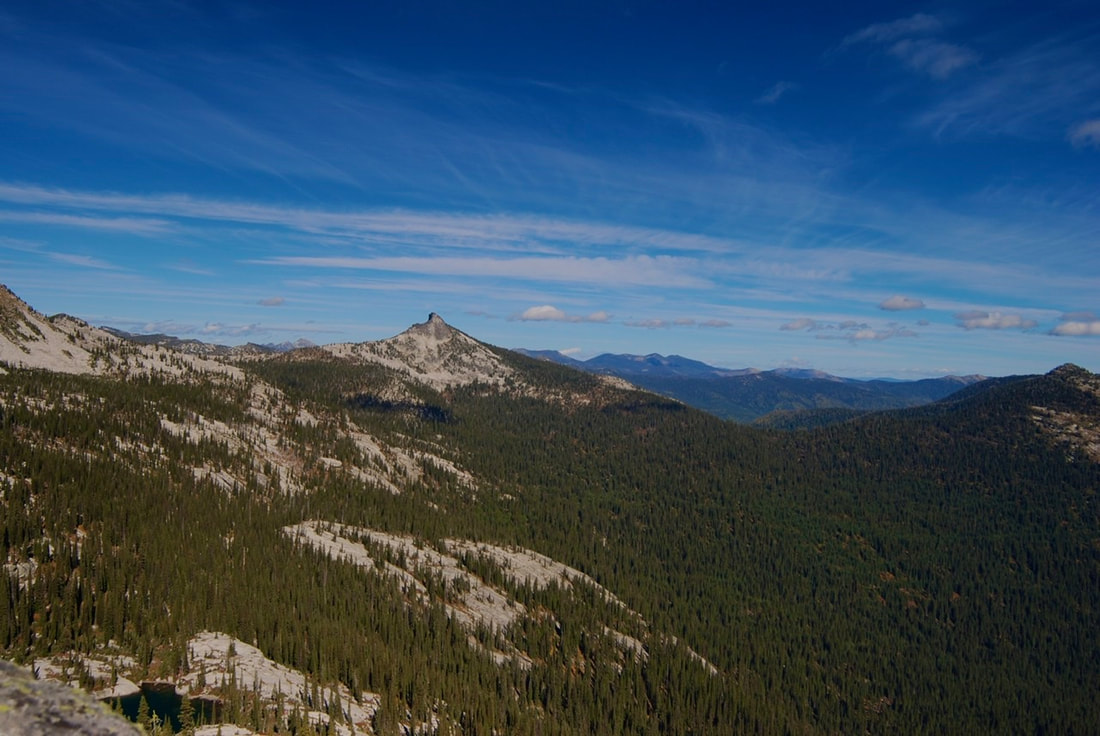 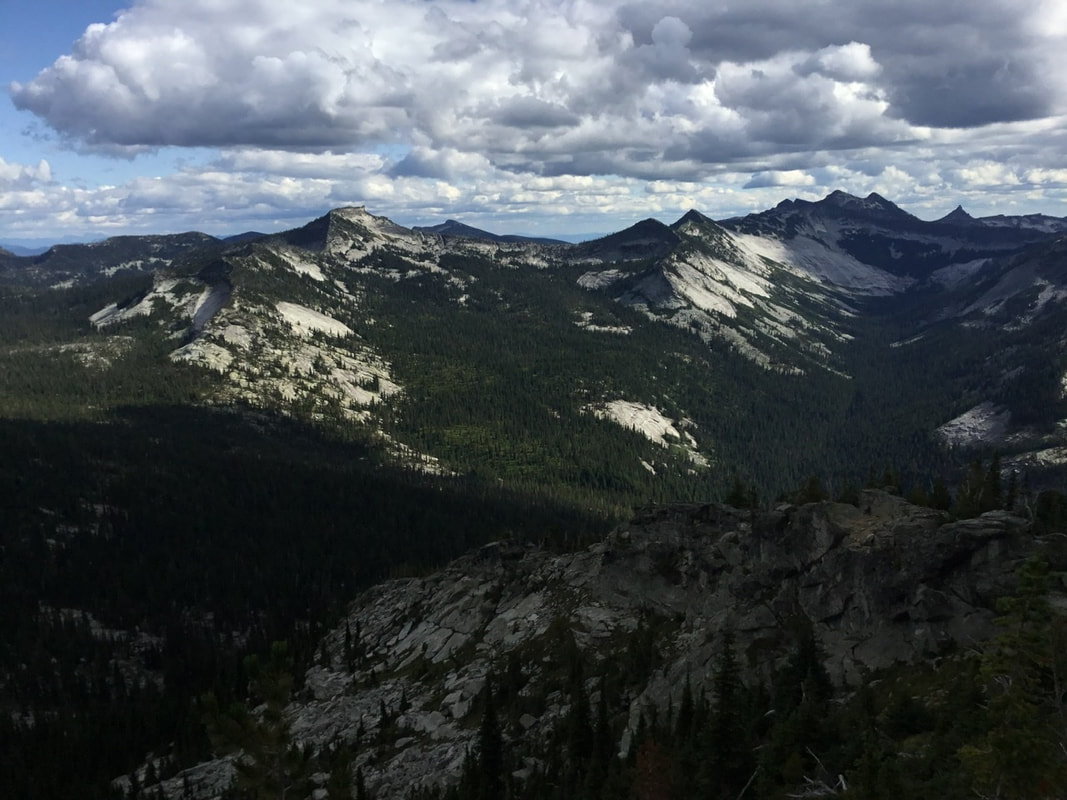 HARRISON PEAK ON LEFT FROM THE WIGWAMS EAST TRAIL

THE SELKIRKS SEVEN SISTERS WITH HARRISON PEAK ABOVE THE OLD HIKER 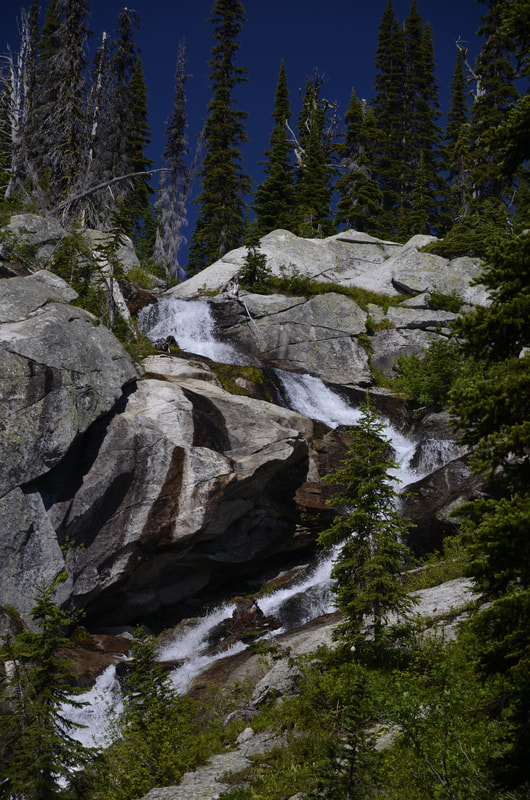