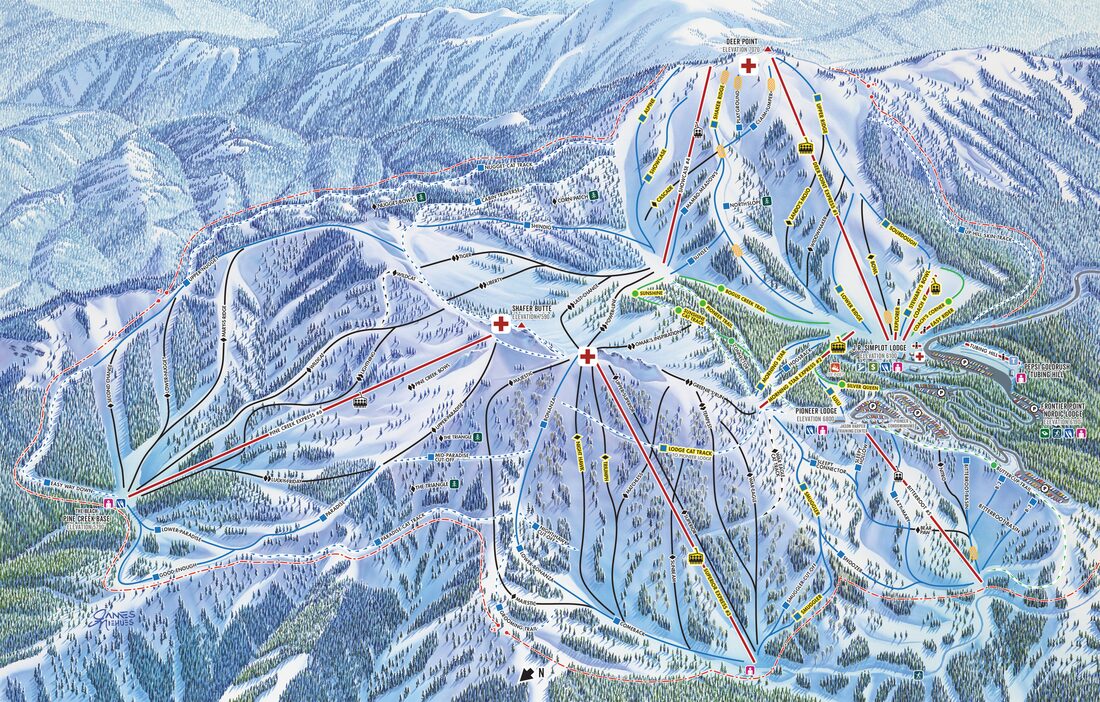 Bogus Basin is so much more than a ski area – it’s a year round destination for recreation and education. Countless kids have made their first-ever turns at Bogus Basin. Whether it’s with their families, friends, or through one of the many affordable school outreach programs, Bogus Basin exists to serve generations of Idahoans – from age 2 to 102.

Bogus Basin Recreational Association, Inc. is a 501 (c)(3) charitable organization, created by the Boise community in 1942, and operating under an all-volunteer Board of Directors and Association. A professional staff manages all day-to-day operations.
TO CONTRIBUTE CONTACT CHIC VIA THIS WEBSITE

Bogus Basin History
How Bogus Basin actually earned its name is a matter of debate. One version is back in the 1880s, when two prospectors loaded a shotgun with a few dollars’ worth of gold dust and blasted it into the walls of a worthless cave near Shafer Butte. They galloped down to Boise where they slammed their “find” on a local bar and sold shares in the “mine” to gullible patrons. By the time the new owners realized they had been fleeced, the swindlers had disappeared.
Another version is a two-paged story of a hard-to-find drainage and an 1863 mining claim. Captain Tom Morgan and a group of no-accounts, filed a claim in the area of the current base facilities, near Shafer Butte. Later they returned to Boise with the fruits of their labor, reportedly as much as $50,000 worth of gold. After a legendary spending spree, it was discovered to be fool’s gold (iron pyrite) that had been chemically tuned up. The group was neither caught nor ever seen again.
Alf Engen, the father of the American powder technique, selected the site for the ski area at Bogus Basin in 1939. Bogus opened to the public in December 1942 with a 500 foot (150 m) rope tow.
The first chairlift was installed in 1961. The resort currently operates 7 chairlifts and one Magic Carpet. Two of these chairlifts are high-speed quad (detachable chairlifts), installed in 1995 (#1 Deer Point) and 1999 (#6 Pine Creek).

Bogus Basin Nordic CenterCheck the Nordic Updates & Info page by clicking here.
Bogus Basin Mountain Recreation Area has more than 20 miles of groomed trails, including 4 miles of lighted trails for night skiing. You can ski all the way to the Shafer Butte Campground for great views of the Valley. Alpine touring skiers trek up to the campground and then ski ungroomed trails around Mores Mountain. There are lots of opportunities for classic, skate and backcountry skiing and snowshoeing in the area.
Dogs are not allowed.
Lessons and rentals are available. The Bogus Basin yurt off the Nordic trail system is available for rent for overnight stays.
For more from the Idaho Statesman on Idaho Nordic areas click here.
The Nordic GroupThe Nordic Group began in 1989 as “The Nordic Foundation,” one of the first volunteer organizations directly promoting the lifetime sport of cross-country skiing in the Treasure Valley area. The Nordic Group sponsors Trail Improvement days each autumn and provided primary support for new trails, including Sapper’s Return and Sidewinder in 1995, Red Tail, Meadow and Two Deer in 2002 and the completion of Red Tail Trail in 2004.
For many years, community skiers and the Bogus Basin Nordic Group had discussed the idea of lighting some of Bogus Basin’s 23 miles of Nordic trails so more working people and youth could train, exercise and recreate after the early sunset in winter. Bogus Basin pioneered alpine skiing under conventional lights more than 40 years ago but no lighting was available on the “Nordic side of the mountain” and now it is.
Fundraising for this project began in 2003; a prototype system was erected and tested last winter. The Nordic Group and its collaborators installed the full system over a seven-month period in 2005.
Idaho Snow SportsIdaho is a popular winter destination for skiers and boarders offering beautifully groomed runs and glades of feather-light powder for all skiing and boarding abilities. With more than 26,000 leg-burning vertical feet, 22,000 skiable acres and an endless array of Nordic trails and loops, Idaho has become a hub for skiers and boarders seeking blue skies, fresh powder and few crowds. For a listing of all of Idaho’s great ski areas, visit www.idahowinter.org.