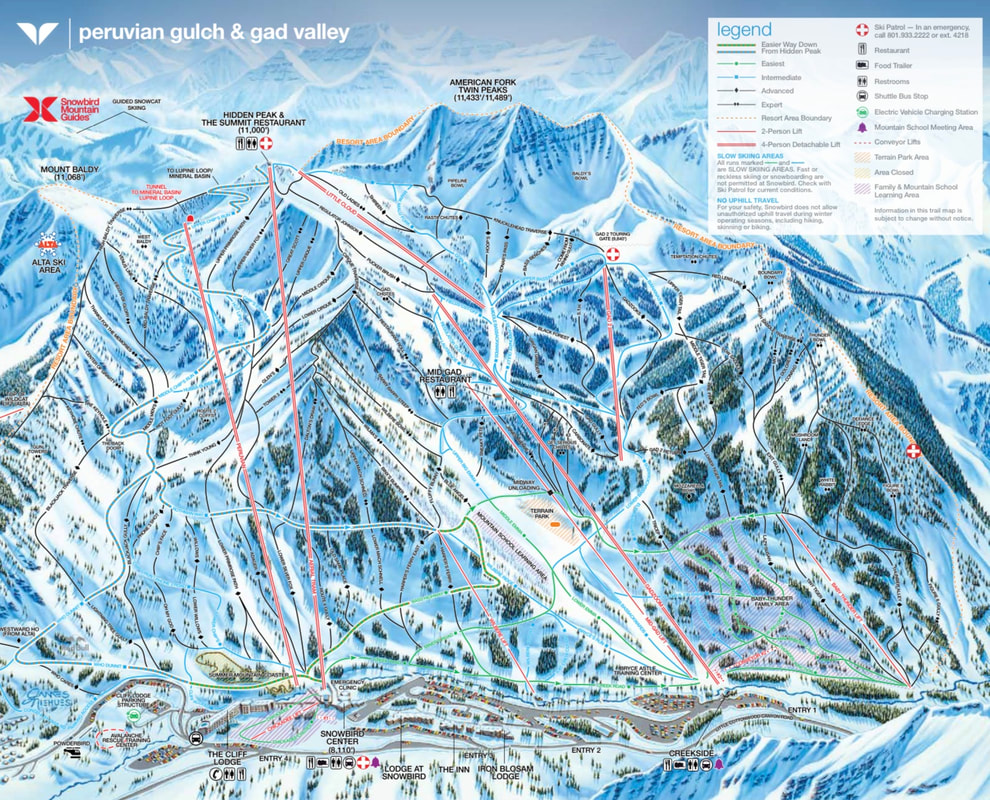 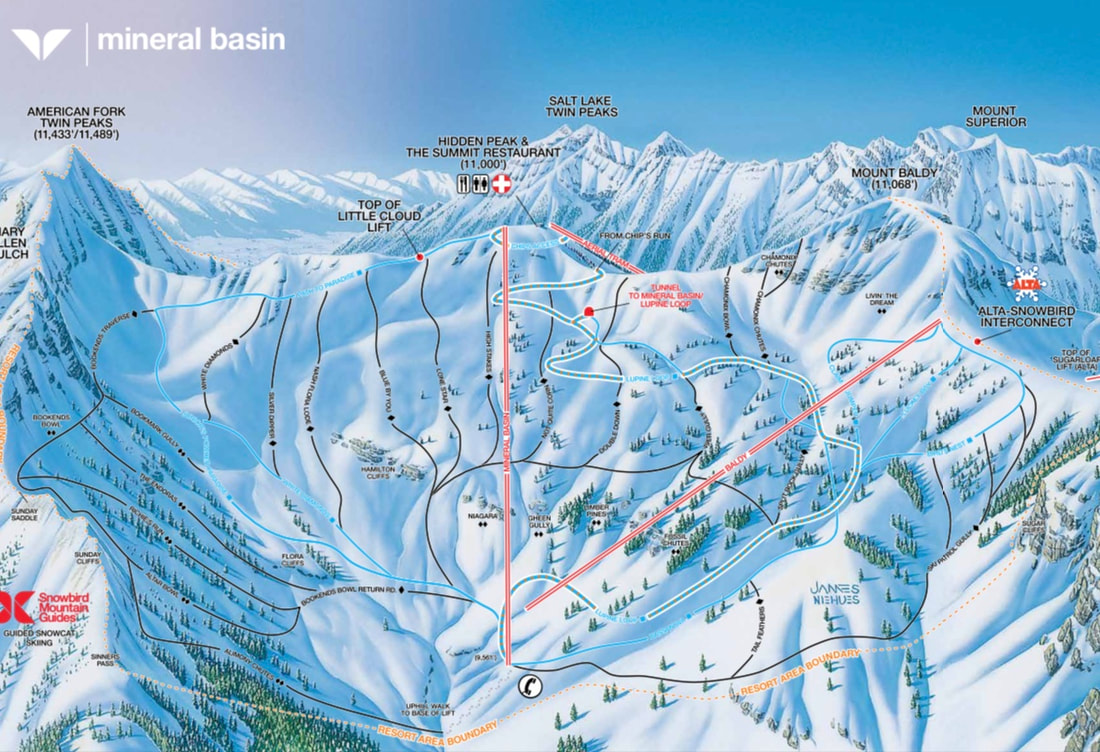 Snowbird TodayThe last few years at Snowbird have been some of the most transformative since the resort opened in 1971. Beginning with the construction of The Summit in December of 2015, an expansion of the Creekside Day Lodge, renovations to The Cliff Lodge and expanded snowmaking, Snowbird's commitment to improving the resort has continued. Recently completed projects include the renovation to the Snowbird Center by adding guest space and restrooms in 2018 and a new network of bridges to allow for easier access to The Cliff Lodge, Snowbird Center and Lower Village in 2019.  Our newest dining establishment SeventyOne, located in The Cliff Lodge and completed in 2019, brings to the table a throwback to our early roots and a sophisticated, '70s twist on comfort food and contemporary American fare.
Snowbird improvements continue to shape a more sustainable future in the ski industry with upgrades to its existing cogeneration plant. The new Snowbird Power Systems facility completed and powered back on in 2021 will cover nearly all of the energy needs of the entire resort. The facility will reduce Snowbird's dependency on the traditional grid, meaning that Snowbird will be almost entirely energy independent and more efficient. Snowbird's investment in the future of the resort continues with the forthcoming launch of our newest summer activity installation, the ZipWhipper. This feature combines the fun of a rock climbing wall with the thrill of a breathtaking free fall. Expected completion summer of 2022.

The History of Little Cottonwood CanyonLong before skiers discovered the powder paradise that is Little Cottonwood Canyon, miners discovered their own treasure within the rugged confines of the glacial canyon. The history of Little Cottonwood Canyon and the town of Alta dates back to the 19th Century, when a soldier in the U.S. Army first prospected for silver in 1869. The tiny minerals he stumbled upon quickly evolved into a massive industry attracting fortune-seekers who would otherwise never step foot in Little Cottonwood Canyon.
What the soldier had discovered will go down in history as one of the largest producers of silver ore in the Wasatch Mountains. Known as the Emma Mine and the namesake for the Big Emma run in Snowbird’s Gad Valley, the soldier’s find eventually produced more than $3.8 million in silver.
At its peak, 8,000 people lived and worked in the narrow canyon, which boasted two smelters, 138 homes, hotels, boarding houses, stores and even a railroad. The entire town was later destroyed by a series of avalanches.


An Alta DreamerWhile working at the Alta Lodge in 1965, Ted Johnson dreamed of a place that would become Snowbird. Having purchased the deed to the Blackjack mining claim at the base of Peruvian Gulch, Johnson hoped to build a lodging complex as an extension of the Alta community. Blackjack was situated such that skiers could not only ski Alta, but also the wide bowls and two-mile runs of Peruvian Gulch and Gad Valley
Johnson had the opportunity to buy the Snowbird mining claim adjacent to Blackjack, and he soon realized that the canyon could handle an entirely new ski resort. However, he needed financial support to make his dream a reality
In October of 1969, Johnson met Richard D. Bass at a party in Vail. Bass, a Texas oilman and rancher, was a member of the Board of Directors at Vail and Aspen and knew the ski industry.


The following week Bass came to Utah and the two hiked into Gad Valley. Bass immediately recognized the wisdom of Johnson’s dream. Soon, Bass and Johnson were touring European and American ski areas to get ideas of how to maximize Snowbird’s potential. In April of 1970, the project was underway. Dick Bass had a vision of what he hoped Snowbird would become. In his words:
“My underlying dream for Snowbird is the creation of a year-round resort, which respects and complements the beauty and inspiration of this natural setting – a place dedicated to increasing human understanding through the enhancement of body, mind and spirit.”
Let it BeSnowbird opened in December of 1971 with three lifts, the Tram, the Lodge at Snowbird and the Snowbird Center. The Inn (then called the Turamura) was constructed in 1972, The Cliff Lodge west wing in 1973-74 and The Iron Blosam in the fall of 1974.


In June of 1974, after many years of dedication to the project, Johnson was ready for a well-deserved rest and wanted to spend more time with his family. He sold his interest in Snowbird to Bass.
In 1986, after three years of construction and renovation, an enlarged Cliff Lodge opened its doors to the public. The Cliff is among the finest resort hotels anywhere with a world-class health spa, conference center and the world’s largest privately held collection of oriental rugs. The 11-story atrium, which connects the original building with the new wing, offers a spectacular view. Snowbird Ski and Summer Resort includes the finest facilities the skiing world has to offer combined with an unparalleled accessibility to a major metropolitan city and international airport. Snowbird has also fostered a reputation for its environmental stewardship, for which it also has been awarded numerous prestigious awards.


The Continual Quest to ImproveKnown for its deep powder snow, Snowbird made a conscious effort to expand its beginner and intermediate terrain with the installation of the Baby Thunder Chairlift in 1995. Two years later, “The ‘Bird” entered the age of high-speed chairlifts when the Gad I chairlift was improved to a high-speed quad and appropriately named Gadzoom.
The ongoing quest to improve received a major boost in April of 1999 when a crew of nine people composed of Garaventa/CTEC and Snowbird employees began the task of hauling the lower terminal of the high-speed Mineral Basin Express chairlift to the base of the coveted powder bowl. The parts were actually delivered to the Alta Ski Area parking lot where they were loaded onto a trailer and hauled, via snowcat, through Alta and over Sugarloaf Pass to Mineral Basin. Some of the pieces weighed as much as 16,000 pounds and took four snowcats to move into place.
Since there was no crane available to unload parts, the crew played a game of industrial “Jenga”, stacking cribbing under each piece and then jacking them up to be able to pull the trailer free. The process lasted until mid-May due to some of the heaviest snowfall of the winter.


In early June the top terminal pieces were delivered to Snowbird and then positioned in a staging area outside the Tram Club. In mid-June the task of hauling parts to Hidden Peak began. Garaventa/CTEC engineers designed a special lifting frame and system to utilize the Aerial Tramway as a giant moving crane. Each morning, crews loaded up to 16,000 pounds of lift parts and other construction materials under the red Tram car and slowly hauled the load to Hidden Peak. In early July, concrete was taken up the mountain by truck and lift tower installation began.
In the summer of 2001, just months before Utah would play host the 2002 Olympic Winter Games, Mineral Basin received its second high-speed chairlift with the installation of Baldy Express. Not only did this expand the skiable terrain in Mineral Basin but it provided a connection with Alta and allowed the two resorts to offer one lift ticket to ski a whopping 4,700 acres of powder-filled terrain. SKIING Magazine has ranked Alta and Snowbird the No. 1 resort in the United States multiple times since the two joined at Sugarloaf Pass, and Outside Magazine named Alta and Snowbird the No. 1 ski resort in North America in 2008.
The Peruvian Express Chairlift and Tunnel opened in 2006, allowing easier access to Mineral Basin through a 600-foot, one-of-a-kind original (the only ski tunnel in North America).  In the summer of 2012 Snowbird replaced the Little Cloud two-seater with a high-speed detachable quad chairlift and plans to replace the Gad 2 chairlift in the summer of 2013 with another Doppelmayr high-speed quad. Other additions to Snowbird’s offerings have included the Creekside Day Lodge, nine summer activities including the Alpine Slide, Ropes Course, Mountain Flyer, Bungee Trampoline, Climbing Wall, Kids Inflatables, Air Jumper and summertime rides on the Peruvian Express chairlift.


Off-mountain improvements at Snowbird have included a full renovation of The Cliff Lodge including the hotel rooms, The Cliff Spa, award-winning Aerie Restaurant and meeting space.
On the mountain, Snowbird has installed snowmaking systems in Gad Valley, Peruvian Gulch and Mineral Basin allowing the resort to provide exceptional skiing and snowboarding in the early season.
One of the largest changes to occur at Snowbird, a resort known for its snow, terrain and access to Salt Lake International Airport, is the focus on guest service. In the fall of 2011, Snowbird initiated a customer service program that involved every department in the company and every product and service provided at Snowbird. The results were immediate and astounding. Onthesnow.com, the most visited snowsports website in North America, named Snowbird the No. 1 resort in North America. More importantly, the guest feedback was tremendous and reinforced Snowbird’s commitment to providing “Memories to Match Our Mountain.”