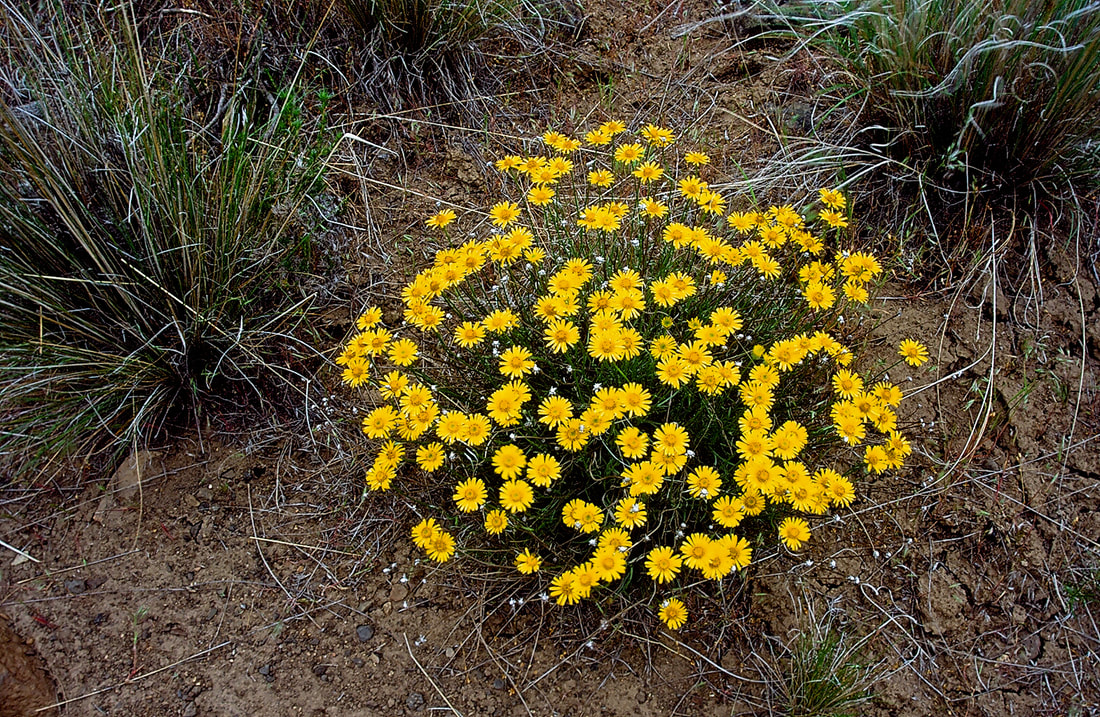 GENESIS NAME:  Erigeron chrysopsidis
DISTRIBUTION:  WA, OR, CA, ID, NV, OR,
SEASON:  Blooms May thru July and can last into August
MEDICAL USE:  It was used for as an eye medicine to treat “dimness of sight.” It was used as an astringent, a diuretic, and as an aid for kidneys or the gout. The Cherokee and Houma tribes boiled the roots to make a drink for “menstruation troubles” and to induce miscarriages (to treat “suppressed menstruation”).
POISONOUS:  Mentha Pulegium is highly toxic and can cause acute liver and lung damage. Fleabane refers to several wildflowers in the Erigeron family of plants. Although they are known as effective flea repellents, these flowers may cause gastrointestinal distress when ingested.
EDIBILITY:  Only the leaves are edible. They are hairy so they have a somewhat 'furry' texture making eating them raw not exactly too pleasing. for being used to attract pollinators, fleabane is a known wild edible. Leaves of fleabane are cooked (they can be eaten raw, but cooking will remove the small hairs on the leaves and stems) and served along other greens. Sources claim the leaves taste similar to spinach. Fleabane leaves contain caffeic acid, which has been shown to have antioxidant and neuroprotective properties.
​FEATURES:   Also known as dwarf mountain fleabane, golden fleabane is an attractive, low growing mat plant, with many erect stems from 3-15 cm high capped with a single flower head. The herbage consists of numerous spreading hairs on the stems and leaves. The leaves are narrowly oblanceolate and mostly basal.
LEAVESThe leaves are narrowly oblanceolate and mostly basal.
​FRUITS:

Erigeron chrysopsidis is a North American species of flowering plants in the daisy family known by the common name Dwarf yellow fleabane. It is found in the western United States: southeastern Washington, Oregon, extreme northern California, northern Nevada, Idaho. Erigeron chrysopsidis is a very small perennial herb up to 15 cm (8 inches) tall, forming a taproot. Most of the leaves are low and close to the ground. Each stem produces only one flower head, with 20-60 yellow ray florets plus numerous yellow disc florets.

Fleabane (Erigeron spp.) is a member of the Aster family. As a native species across North America and naturalized in Europe, this somewhat-invasive plant is very common along roadsides and fields. Species within this genus may be annual, biennial, or perennial. Many of the species within this genus are regarded as weeds; however, more Erigeron species are being cultivated as native plants rise in popularity.
Fleabane plants are recognizable due to their hairy stems and leaves, as well as their bright yellow composite flowers which appear in mid-to-late spring. Petals of these flowers range from white to yellow to various shades of pink. Although fleabane may not be as extravagant as some of the other plants within the aster family (sunflowers, chrysanthemums, zinnias, etc.), this widely-available plant has been known to have many uses.